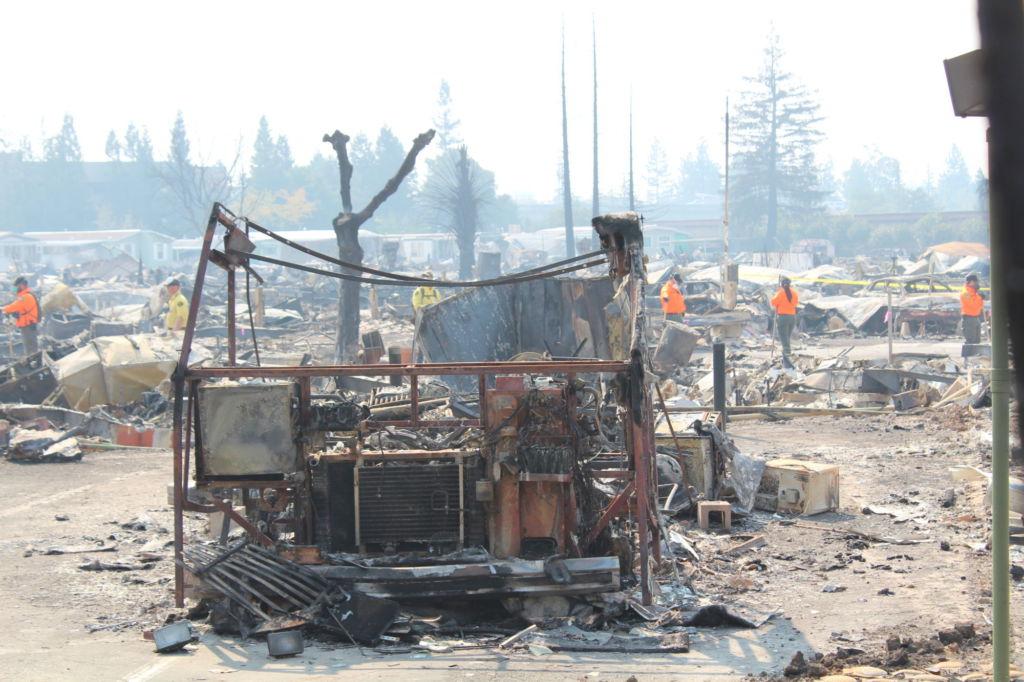 Wildfires continue to scorch Northern California’s wine country regions, quickly becoming the deadliest fire in California’s history with a confirmed death toll of 35 and over 600 people still missing, according to the San Francisco (SF) Chronicle. The forceful velocity of these fires has rained ash and poured smoke over the Bay Area, resulting in the cancellation of sports practices and school.

Currently, 16 separate fires have incinerated neighborhoods across hundreds of dry, smoggy suburbs, scattering ash and smoke on surrounding cities and states, according to the Los Angeles (LA) Times. As the air quality in Marin has reached “hazardous” levels, the highest of the six air quality classifications, according to the Environmental Protection Agency (EPA), schools across the county canceled their sports practices this week, in addition to school closure this past Friday, Oct. 13. According to Principal David Sondheim, fears over student health encouraged the discontinuation of sports practices and games starting last Tuesday, as well as the cancellation of all Tamalpais Union schools on Friday.

“To reduce the chance of breathing difficulties…we recommend students stay inside as much as possible…and keep physical activity to a minimum,” Sondheim wrote in a school-wide email.

Although Redwood decided to cancel its sports practices, non-school sports continued with their practices to prepare students for upcoming games and events. According to junior Sally Noble, a varsity rower for Marin Rowing, her coaches decided to continue practice for certain boats this week.

“We have a big race next weekend so most of the teams haven’t been practicing, but the two boats going have been rowing with masks on,” Noble said.

According to junior Rivca Chaver, another varsity rower, exercising with a mask on was difficult, yet she thought it was important the team still practiced to be prepared for their race in Boston next weekend.

“You are trying to breathe in the air and it’s just not there, but when you breathe in the smoke it triggers coughing and it feels like it is kicking the inside of my throat,” Chaver said.

Over 182,000 acres of land have been torched, forcing the evacuation of entire towns in Santa Rosa, Sonoma and Napa, according to the SF Chronicle. The influx of evacuees from fire hazardous cities has prompted the opening of multiple evacuation centers across the Bay Area, including at the Civic Center and the gym at Terra Linda High School. The evacuation center at Terra Linda has interfered with the school’s volleyball practices, leading volleyball coach Tahan Minakov to open Redwood’s courts for Terra Linda’s use.

However, according to senior captain of the varsity volleyball team, Alex Lefebure, the Giants have halted all practices and matches, so Terra Linda has been unable to take advantage of Redwood’s open courts.

“Considering that we have had two matches and many practices canceled, it is vital that we come out next week focused and on top of our game more than ever,” Lefebure said. “Because we haven’t played in a week, having flexibility with mistakes is also important.”

According to Lefebure, the practices and matches that were canceled this week could have been helpful to build momentum for their upcoming match against the Branson Bulls. Despite the inability to practice, the team has tried to maintain high spirits regardless, according to Minakov.

Lefebure added that Minakov encouraged all of the girls to get in the gym at least once this week to sustain their fitness for the upcoming MCAL matches.

“I think the whole league has been kind of halted over the past week,” Minakov said. “All the teams are going to be rusty going into MCALS because no one has been able to get into their gyms. These girls play volleyball everyday so they will hopefully be able to get right back into it.”

Although Minakov said he was disappointed to find out practices had been canceled for the whole week, he remains confident in his team going forward and encourages the girls to have a positive outlook on the situation.

“The fact that we have not been able to compete in athletics does not even compare to what everyone else has been dealing with up in Santa Rosa and Napa and further north in that area,” Minakov said. “It’s unfortunate, but I consider us lucky to not be directly in the wildfires.”

According to Minakov, MCALs are expected to resume on Monday, yet with fire containment levels low and deteriorating air quality, the continuation of practices is being examined day by day.

In addition, schools across the district are expecting to receive several transferring students in the next few days, as high schools in Santa Rosa and Napa have been burned and multiple families have been displaced across Marin.