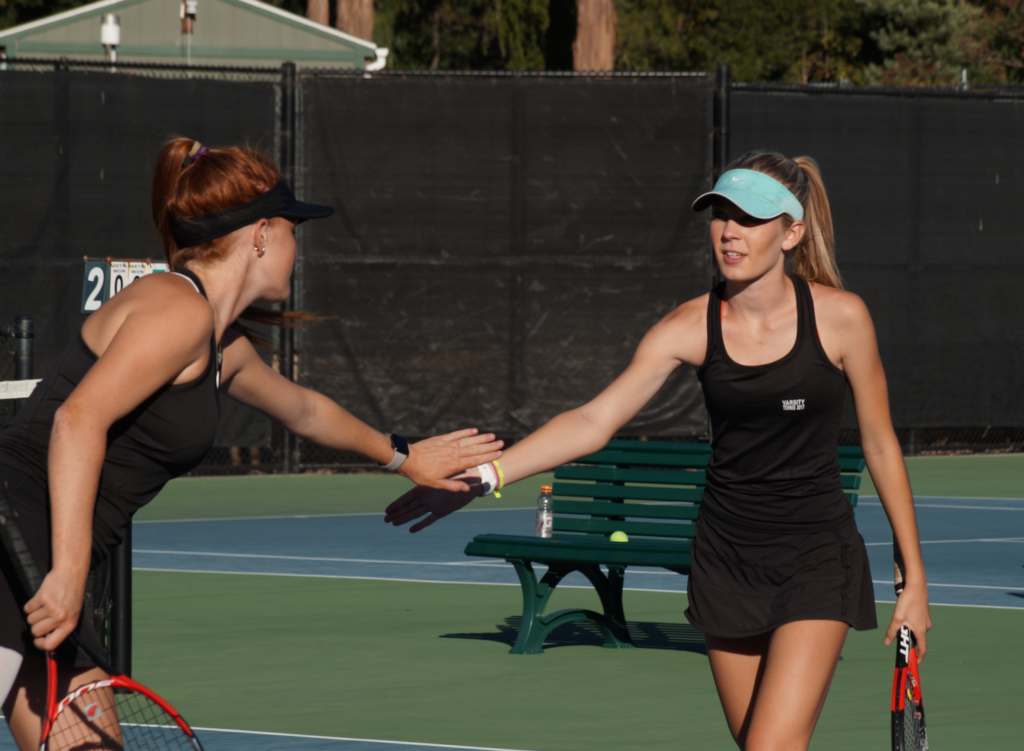 Looking like their usually dominant selves, the girls’ varsity tennis players cruised to an 8-1 team victory over rival Marin Catholic on Thursday at Dominican University.

While the Wildcats aren’t a major threat to the Giants, the match gave freshmen a chance to play and also allowed players to alternate their usual positions, so that singles players could play doubles and vice versa. Senior Devon Cusack had a successful doubles match with senior Molly Kehoe, even though she usually plays singles. Although the win was expected, the Giants were pleased with how they performed.

“When we play teams that are not as competitive I tend to push my shots more. I think our team played really well, from what I know we won every match. There was a lot of effort out on the court from every girl and I am really proud of our team today,” Cusack said.

According to Cusack, the whole team did not play because it was not necessary to have all players in order to beat Marin Catholic. However, freshman players were given the chance to contribute to Redwood’s victory.

“Sometimes we like to change up the order, we only play six singles and three doubles so the whole team does not play every match. Against teams we don’t struggle against as much we like to put in some other girls and give them a chance,” Cusack said.

Cusack played doubles with Kehoe which was a unique opportunity because both seniors typically play singles. Kehoe explained that individually the start of her match was a little rough, but with increased focus came good form, which lead to a win in the doubles round with scores 6-2 and 6-1.

“I think we struggled a little bit in the beginning, but we had really great serves and some really nice volleys and passing shots, so that was good and I think in all we had a really good match,” Kehoe said.

Kehoe also explained that as a team she was really satisfied with how the freshmen stepped up and contributed in the matches, even if it was challenging for them.

“Ella Zimmerman is a freshman and she just finished her match and it was amazing, it was a total battle. It’s always fun when there’s matches like that to watch. I think everyone went out there and gave it their all, especially Ella. Her second set was a bit of a challenge as she was down 5-1, and she had won the first set, but she ended up winning at 7-5 which is awesome for her. I am really proud of her,” Kehoe said.

According to coach Marlies Zeisler she knew her team could prevail, , but more importantly, wanted the girls to enjoy playing without the stress of trying to win, since Marin Catholic is not a tough opponent.

Despite the lack of competition, individually girls knew that they needed to  improve on their performance, especially since a few key members had the day off, according to Zeisler. .

“Sometimes when you play a team you have expectations of what it is going to be like, and that kind of makes it harder if it’s not like that. I think mentally, it is not an easier match, but physically I think that we have a group of talented girls so to see them out here, playing and competing, that was really great.” Zeisler said.

The girls’ next match is on Tuesday against Branson. According to Cusack, this will be the hardest match for their team this season.