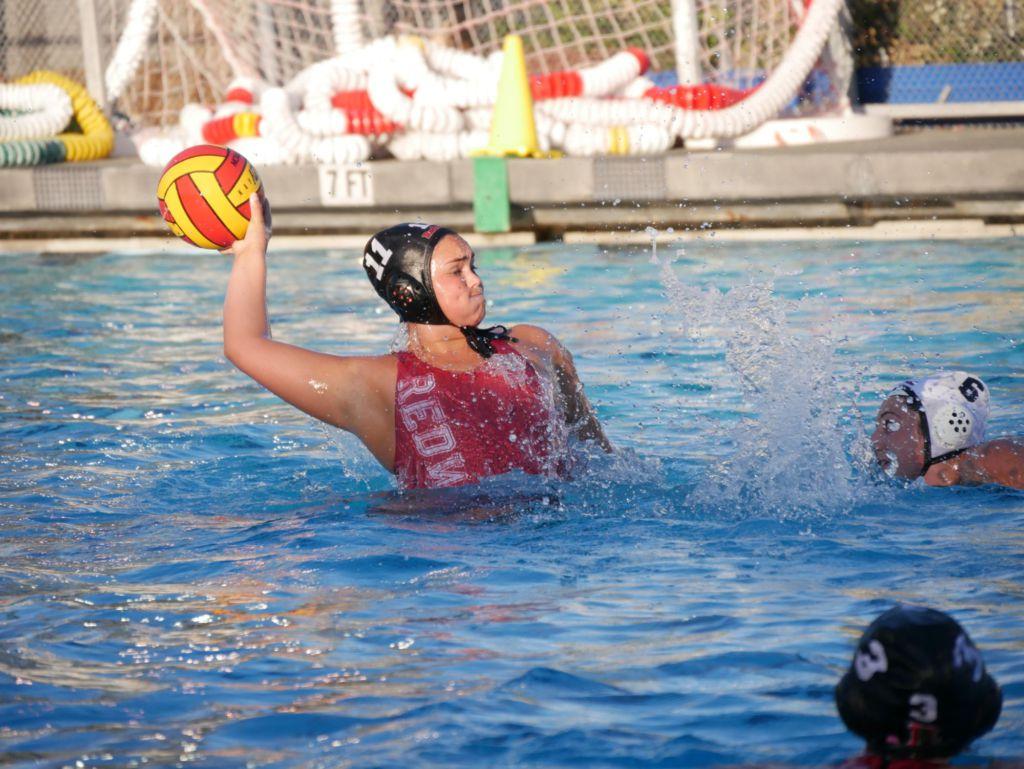 Donnelly prepares to launch a pass over a defender.

Thursday’s game began uneventfully, but after a couple minutes, seniors Caitlin Donnelly and Natalia Lazor began to rack up points, each scoring one goal after another to lead the team to victory.

The first goal was by Donnelly; she received the ball from Lazor and was immediately double-teamed by two of the Mustang’s defenders, but she managed to fend off the two players and worked her way to the goal. Once she reached the two meters, she sent the ball soaring over the head of the goalie and it ripped through the net.

Donnelly leads the team in goals on Thursday and is currently the team’s top scorer too. She has scored 22 goals this season and averages 3.7 goals per game, according to MaxPreps.

With a score of 10-4 at the half, Redwood had a comfortable lead. Each team went on to score two points each in the last two quarters and the game ended with a score of 12-6.

Coming off a strong win, the team is looking to raise the bar for the rest of the season.

Kirsten Frazer, who has been coaching the girls for four years, explained the team’s expectations.

“They have some great goals: they want to beat Tam and they want to get first or second in this tournament they’re in next weekend,” Frazer said.

Donnelly said that the team’s strong bond has allowed the girls to be more aware of each other while in the pool. There is more passion this season which will lead to a better outcome, according to Donnelly.

“This team gels really well together. They play really good defense because they all have each other’s backs,” Frazer said.

Junior Makenzie Allen, who fired a quick shot past the goalie in Thursday’s game, reflected on her relationship with the team.

“I think we work really well as an entire team. Everyone has something to contribute to the overall game,” Allen said.

The team’s next game is at home on Tuesday, October 10 against the Las Lomas Knights.