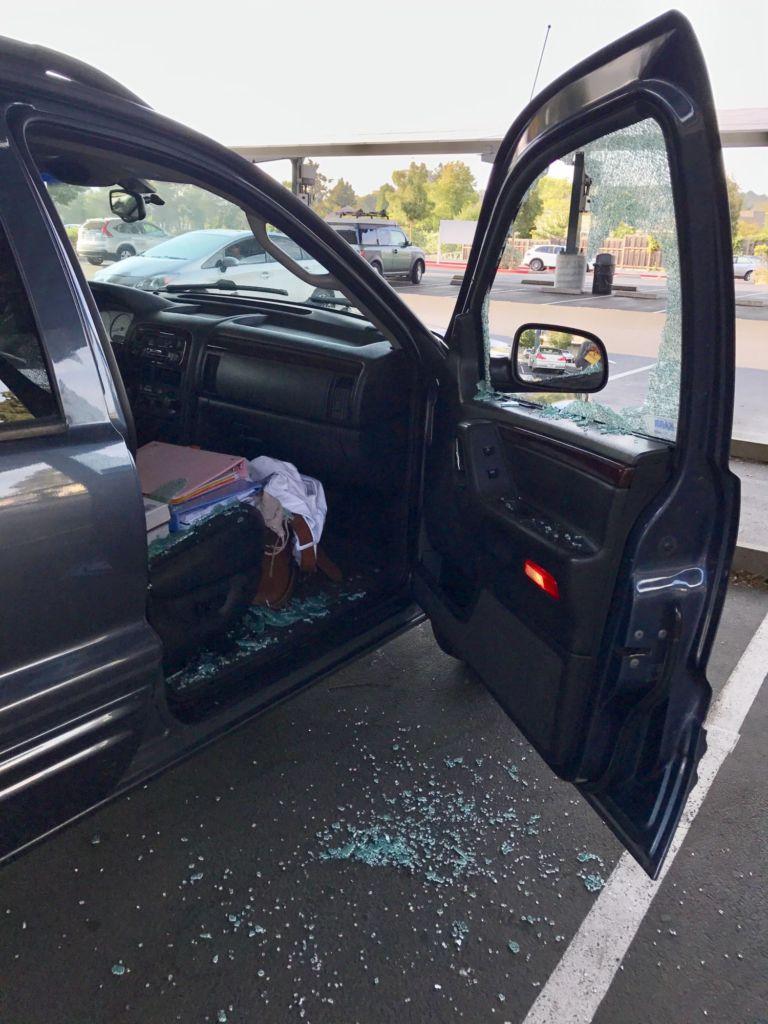 Part of the group of robberies in the parking lot, the front window of Erin McCarthy's car was smashed and her laptop was stolen on Sep. 6.

A 17-year-old girl was arrested Sep. 27 in Fairfax after admitting to stealing a car from the Redwood parking lot two weeks ago and possessing a handgun, according to a report by the Central Marin Police Authority.

The arrest follows the repeated robberies in the front parking lot, escalating to junior Makaela Ures’ car being stolen in a two-hour time period between the end of school and the end of sports practice on Sept. 13th (link).

The stolen Honda Civic was found outside of a Fairfax residence. Police contacted the resident, who said her daughter had arrived early in the morning with the car and handgun, according to the report.

Ures said she discovered that the police had arrested a suspect and found her car when her dad called her during cheer practice on Sept. 27.

“He told me we couldn’t get it any time soon because it’s part of the crime scene, but it was cool to know they found the girl,” Ures said.

On Sept. 14, a resident of the Riviera Circle neighborhood in Larkspur reported finding stolen backpacks in their gutter, and private surveillance cameras caught footage of a male (still unknown) and female suspect dumping the bags and driving away in the stolen Honda and another car, according to the report.

Ures said she was surprised to find out the suspect was a teenage girl, for multiple reasons.

“I watched the surveillance tapes and they looked way older than 18,” she said. “It’s kind of weird that they’re going through the same things as me. I would think she would’ve been more sympathetic.”

Additionally, Ures said she found it scary the suspect possessed a gun, especially if she had the gun while stealing the car.

“If someone were to have intervened, it would have been really scary and had a totally different outcome, ” Ures said.

While the case is still under investigation, police are working to determine if the suspect is linked to other robberies in the

Redwood parking lot and to find ownership of some of the recovered stolen goods. Juniors Carmen Monroe Watts, Amelia Kennedy, Erin McCarthy, Kelsey Rose McNair and teacher Heather Curtaz all reported robberies from their cars in the last three weeks.

“We are, for the time being, adding additional parking lot monitoring between the end of the school and the end of athletic practices when the thefts have been occurring,” said principal David Sondheim in an email sent to the Redwood community on Sept. 14.

However, according to campus security guard Robert Roman, this increased surveillance is ending because of the arrest.

Since the car burglary, Ures also said she is definitely more aware of leaving her possessions at school, and that she’s been hiding her belongings every day now.

“Whenever my friends have something in their car, I always tell them to put it away because I’m scared something’s going to happen,” she said.