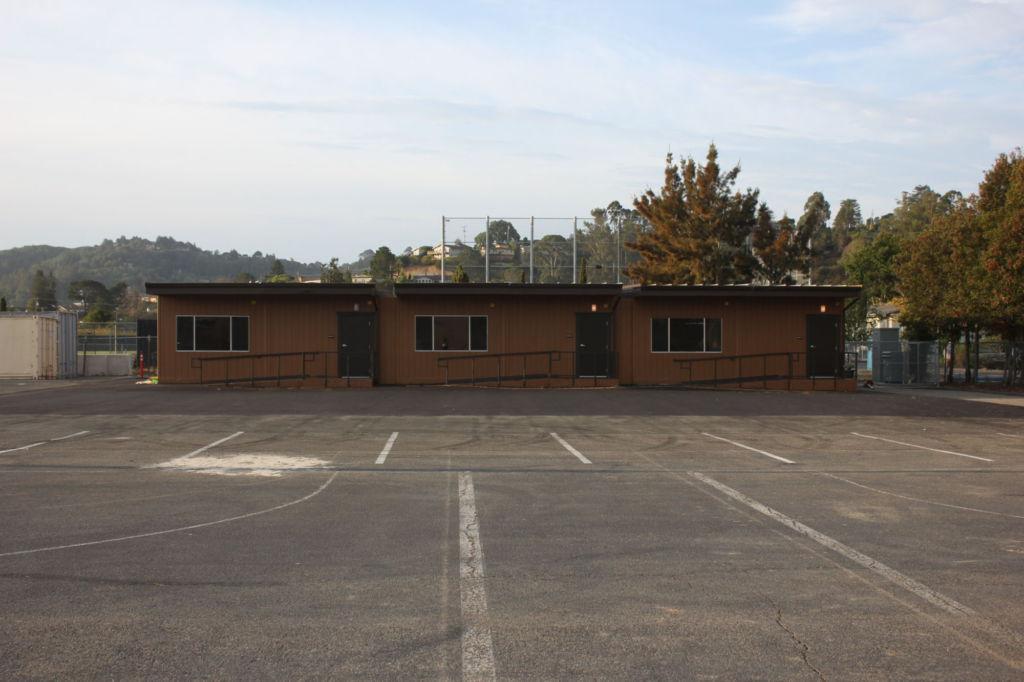 Behind the gym are the new portable classrooms, built in an effort to accommodate Redwood's growing population.

This past summer, three portable classrooms were built on the blacktop behind the main gym. These classrooms provide more space in an effort to solve the issue of over-crowding throughout the school.

With a growing population of over 1,900 students, the school needed more rooms to hold classes. The portable classrooms create more space  for students and are larger than most classrooms inside the main building. They all have brand new chairs, tables and technology, such as whiteboard projectors and dell laptops.

The four teachers who volunteered to teach in the portable classrooms this year are Steve Hettleman, Jennifer Madden, Stephanie Haver Castex and Jon Weller. The classes being taught include  American Literature, Academic Workshop, English 3-4, AP English Language and Composition, English 1-2 and Language of Humor.

English teacher Jon Weller has been at Redwood for five years, but this is his first year having a classroom all to himself on campus.

“The biggest benefits are air conditioning, a little bigger space and I can put anything on the walls,” Weller said. “And they’re super clean.”

However, the air conditioners in the portables can be very noisy and echo throughout the classroom, making it difficult for students and teachers to hear each other, according to Weller. The classrooms have large windows facing out toward the basketball courts, so PE classes on the blacktop can also be distracting, according to students.

“Upperclassmen are taking harder classes and need to get to their classes on time in order to fully understand and learn the curriculum. Underclassmen have PE and rarely drive out to lunch, so the walk to the portables is not an issue for them,” Cooke said.

Junior Isabel Talke has class in a portable classroom fifth period, which is right after lunch most days, and before lunch on Wednesday block days. With the classrooms so far away from the parking lot, it is difficult for students to leave efficiently and come back to be on time for class, according to Talke.

Students are also finding the walk between passing periods problematic. The walk from the main building can take at least five minutes, depending on what class students are coming from.

“I’m always arriving right when the bell rings or a minute after. I have math, so it’s the complete opposite end of the school,” Talke said.

Many teachers are learning to be more flexible with tardiness because it takes students longer to walk to and from class, according to Weller. In previous years, Weller deducted points from students’ grades if they were consistently tardy,but he can no longer do that due to the distance from the portable classrooms to the main building.

“Kids get here sometimes a couple minutes late if they’re coming from science, math or world languages. That screws up my timing because I’ve been teaching the whole 50 minutes, and I innately know how long everything takes. I always run out of time,” Weller said.

The portable classrooms are a fairly new addition to the school, and while there are both many positive and negatives aspects to them, there is plenty of time to make adjustments.

Haver Castex volunteered to teach in a portable classroom this year because she wanted to try out something new. She believes it is too early on in the school year to judge how successful the classrooms are.

“It may be too soon to tell how the portable classrooms are going to go this year, but I am looking forward to finding out,” Haver Castex said.