Hurricane Harvey: reflecting beyond the borders 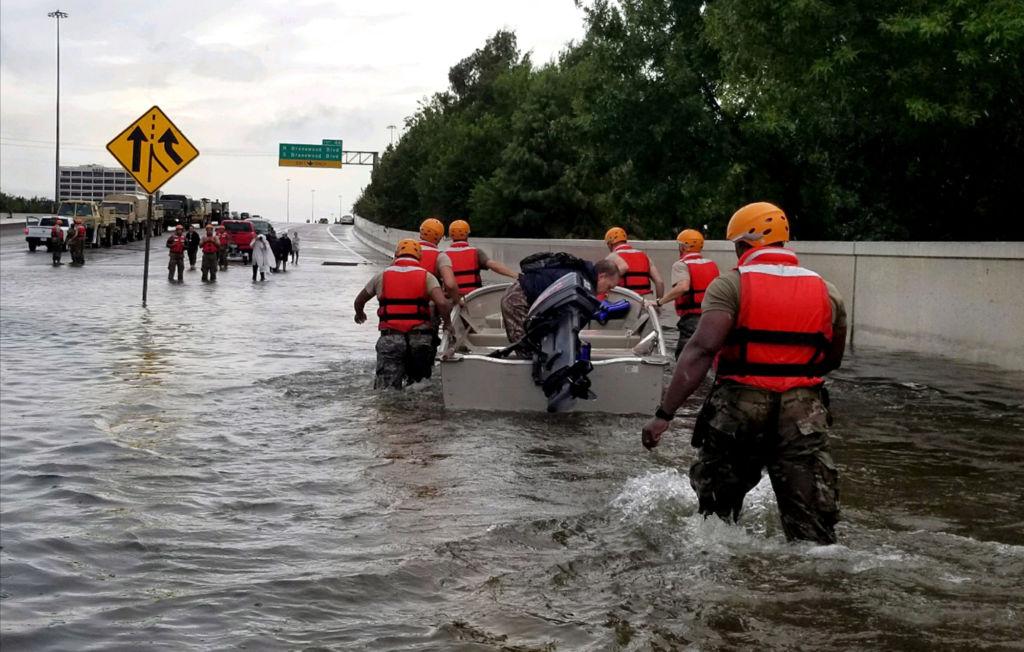 Rushing to help, members of the Texas National Guard have been sent in.

Houses that used to be homes—filled with precious keepsakes and memories—are simply gone, just like some of the families that filled them. Beloved pets wander in the floodwater, seeking their missing owners and desperate to be reunited.

Hurricane Harvey traveled 3,100 miles, finally making landfall on the Texas Gulf Coast on Friday, Aug. 25th, and has since has caused upwards of 60 deaths. It contained winds over 130 mph and dumped over 50 inches of water on areas of Houston. It could cost up to $180 billion, and even drew comparisons to Hurricane Katrina. However, these statistics don’t describe the suffering of the many people and animals who have been devastated by Hurricane Harvey.

Although it is nearly 2,000 miles away, Harvey isn’t completely removed from Marin or even Redwood, because among those affected are several family members of Redwood students, like senior Stella Campodonico and junior Simone Mardell.

Campodonico has kept in contact with her family members in Houston through text and email to stay updated on their situations, some of which were perilous. Her cousins sent her daily texts that read “just saying ‘I’m still alive.’” Although these daily updates may seem excessive, in the areas of Texas where Hurricane Harvey was most devastating, being alive was not a given.

Campodonico’s family relocated to parts of Houston that were less affected by the hurricane, but they were still in some danger and had to act accordingly.

“My cousin told me that she has to have a Sharpie in her pocket to constantly re-write her Social Security number on her arm in case they find her body,” Campodonico said.

This practice had been encouraged by the local governments of some cities, as it made it easier for law enforcement or medical assistants to identify any corpses, according to Patrick Rios, the mayor of Rockport, TX, 200 miles south of Houston.

Campodonico’s relatives were included in the over 30,000 people that were displaced due to Hurricane Harvey, according to the Los Angeles Times.

Former Redwood student Nick Gathara, who attended Redwood his freshman year and moved to Texas in 2014, has firsthand experience of the ruinous effects of Hurricane Harvey.

Gathara now lives just outside of Austin, and has multiple close friends who live in Houston.

“[My friends] seem to be doing alright, as far as communication, but they lack necessities like food, water and gas, which is scarce right now, but it’s getting back on track because it’s no longer raining,” Gathara said.

Although Gathara’s area wasn’t as affected as Houston, he is fully aware of the havoc wreaked by the storm.

“It’s devastating – people losing their houses or their loved ones to the hurricane; people not being able to find their pets because of it; having to evacuate and leave everything they own behind,” Gathara said.

Mardell, who is a member of the Marin chapter of the National Charity League, encouraged students to stay aware of the ongoing situation in Texas and help out with any kind of donations, which NCL will be collecting.

Gathara’s community in Austin is also collecting donations and funds.

“Being in a part of the state that wasn’t as affected, we want to help out the parts that were,” Gathara said.

Although the crisis in Texas may seem distant when viewed through a television screen, it is a painful reality that is affecting many of our fellow Americans.

“Things always seem a lot less worse when they aren’t happening to you, like when you see them on TV. There’s a lot of memes and a lot of jokes going around about Houston, like people seeing sharks on the road, and it’s kind of funny but at the same time there are people who have lost everything and could just use some help,” Gathara said.

Mardell criticized the government’s response to the situation, saying that their actions worsened the effects of Hurricane Harvey.

“It’s not like they could have prevented the damage, but I feel that they should have evacuated a lot earlier,” Mardell said.

The mayor of Houston, Sylvester Turner, was aware of the risk to his citizens, but decided against issuing evacuation orders. He has since been criticized for this, and defended himself by arguing that if he had given the order to evacuate, it would have caused untold chaos.

Even so, chaos was abundant – during and after the hurricane, emergency services were overwhelmed, with residents waiting outside shelters like the George R. Brown Convention Center in Houston. The 911 system was also backed up, with thousands of calls coming in daily according to CNN.

However, Gathara was grateful for the sheer number of emergency responders that were on the scene.

“I’m glad that there were actually more emergency responders than when Hurricane Katrina hit, and I think that a lot of lives were saved because of that,” Gathara said.

With Hurricane Harvey leaving drenched and ravaged cities behind, what is next for those affected? Volunteers and donations are pouring in from average families and celebrities alike, but more contributions are always needed.

“I hope the people in Houston can stay safe for the time being, before they have to worry about what they lost. And if anyone helps out and does their part, every little thing helps,” Gathara said.