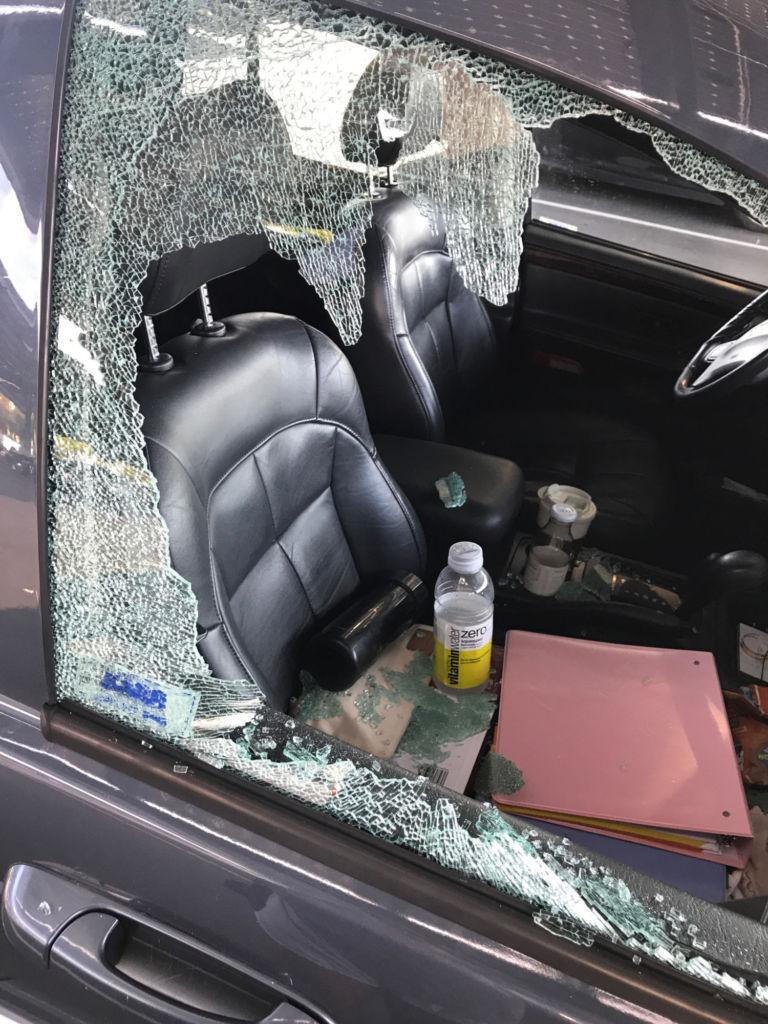 Two cars were broken into in the front parking lot after school on Wednesday afternoon. The cars, belonging to juniors Erin McCarthy and Kelsey Rose McNair, were parked in the middle row of the lot. The passenger seat windows of both cars were shattered and McCarthy’s laptop, a Macbook Pro, as well as McNair’s water bottle, were stolen from their front seats.

McCarthy was at field hockey practice when the incident occurred. After leaving her belongings in her car, McCarthy left the parking lot at 3 p.m. for practice and returned at 5:30 p.m.

“When I walked back to my car I saw that the window was shattered and the first thing I thought was ‘my laptop,’” McCarthy said. “It was in there on the seat but it was covered by a shirt and a bunch of different binders so it wasn’t visible at all. But there was glass everywhere and my laptop was taken.”

McCarthy said that her first reactions were shock and anger when she first saw the damage. She was also stressed about the loss of her laptop, considering that all of her homework was saved in it.

“The fact that they chose my car over a bunch of other cars, which might have been unlocked or had stuff showing, it’s just an unfortunate situation,” McCarthy said.

McNair was on campus to watch the Redwood vs. Marin Catholic tennis match at the time of the incident. At 4:45 p.m., her friend, who was leaving cheer practice, called McNair to alert her that something had happened to her car.

“I thought someone toilet-papered my car or put something gross on it so I ran and I looked over at my car. My passenger window was completely shattered and my backpack was missing,” McNair said.

McNair walked to the driver’s side of the car to check if her wallet was still there and noticed that the contents of her backpack, including pens and pencils from her pencil case, were scattered on the ground.

“[It looked like] somebody was looking through my backpack and didn’t find anything so they just left my backpack, because I guess it was boring,” McNair said.

According to McNair, nothing was missing from her car except for her Hydro Flask water bottle.

McNair called 911 right away and was waiting for the officers to arrive when Principal David Sondheim entered the parking lot to go to his car. Sondheim too immediately called the police when McNair informed him about the incident.

According to McCarthy, Sondheim and McNair didn’t know that two cars had been broken into until McCarthy approached them a little later.

McNair, who is new to Redwood this year, said she first thought she was being personally targeted in some way until she realized that McCarthy’s car had been broken into as well.

“It’s just the luck of the draw, I just need to get over it. Redwood is going to do as much as they can to help me. It doesn’t make me hate Redwood or affect my experience here,” McNair said.

In an email sent out to parents and students Thursday morning, Sondheim stated that the police are currently investigating the break-ins and reminded students to keep valuable items out of sight when parking in public parking lots.

“While we usually have very few auto break-ins, both of these clearly targeted cars in which valuables were visible,” Sondheim said in the email.