Giants fault to Matadors, look to serve again vs. Bulls on Tuesday 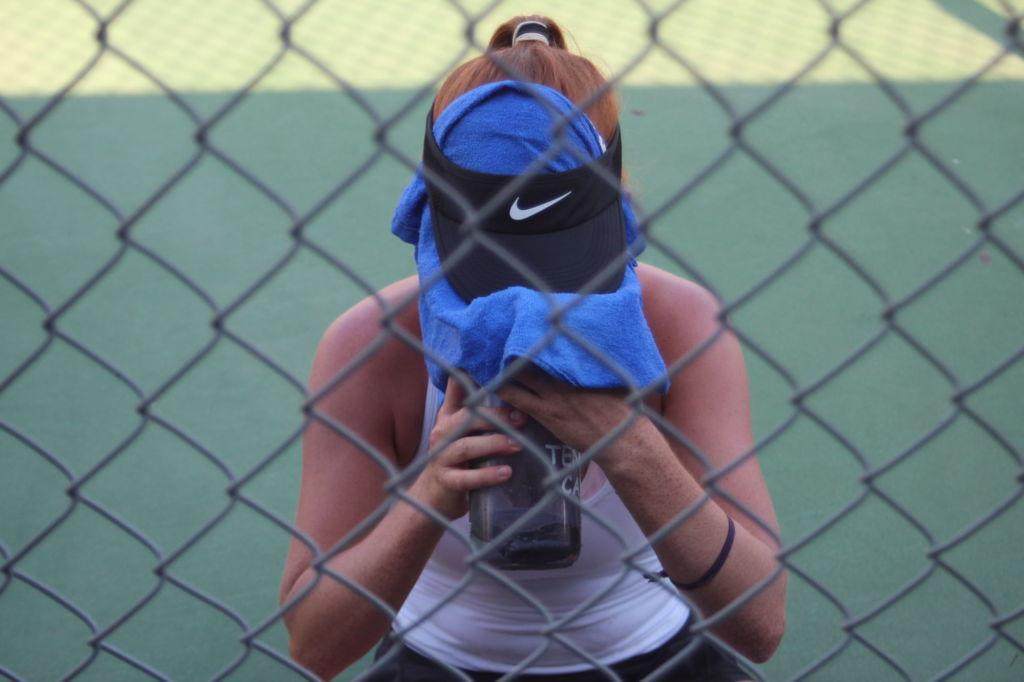 In the 2016 season, the girls’ varsity tennis team finished second in the MCAL race behind their fierce competitors, the Branson Bulls. Going into this season, coach Marlies Zeisler believes that the team can not only get back to where it was last year, but also come out on top by solidifying the Giants’ doubles teams.

“We had a lot of great wins last year with our number two and number three doubles because we kept the partners together so they could get to know each other and their game,” Zeisler said. “The team also has a better competitive nature this year, so the girls will be pushing each other to get better every time they are on the court.”

After losing their first pre-season match against Lick-Wilmerding High School, the Giants were looking to bounce back against the Monte Vista Mustangs on Tuesday, Aug. 29. However, the Mustangs were unable to proceed with the match due to sickness and lack of transportation, according to senior captain Molly Kehoe. This ultimately gave the Giants an extra two days to prepare for their home match against Miramonte on Thursday, Aug. 31.

Zeisler explained before the match that she would like the girls to see what this competition level looks like. Zeisler feels that the competition will help the girls for the upcoming season, since MCALS is not quite as tough for the team, besides Tam and Branson.

“To be able to hold your ground against this team is a great experience,” Zeisler said. “Win or lose, the coaches and I will look for the players to be plugged into the match and mentally together, because it’s hard to be mentally tough when things aren’t going your way.

With their first league match right around the corner, the Giants tried to schedule their preseason tougher than usual, so once the regular season comes around, they will be ready to go.

“Miramonte is always very good,” Zeisler said. “They are similar to us in that they go to postseason all the time. Regardless of the score, it is good for us to have this hard competition to get us ready for MCALs.”

According to Zeisler, the captains have stepped up their preparation a great deal from last year.

“Today at 2:30, all the tables were set, the balls and scorecards were out,” Zeisler said. “So they are on it.”

Cusack’s leadership style has been influenced by Lauren Wolfe, a former Redwood tennis player, who was a captain and played number one singles when Cusack was a sophomore.

“She set a great example for me, and I hope I can do the same, but also implement some of my own ideas into our team culture,” Cusack said.

Cusack believes that the captains work very well together because they bring a little bit of everything to the team.

“Molly is very organized and she has been working on getting the uniforms done and sending emails out,” Cusack said. “Christine has taken the initiative with Teamsnap and communicating through there to our team. Ella is more quiet, but really sets an example for how she plays on the court. And I am usually the loud one, leading warm ups and giving announcements.”

According to Zeisler, the match to watch was senior captains’ number one double pair of Watridge and Ong Bamola. Losing in three games to two, the number one doubles team wasn’t able to come out on top. However, this match showed that the Giants’ were able to withstand the power of the Matadors and able to compete with a top team in the North Coast Section.

The heat was radiating from the court, even giving the fans a taste of the mucky humidity. Zeisler reiterated to her players before the match to be careful in this weather and take breaks when needed, but ultimately to not pay attention to the heat and to just play.

In the end, the Giants fell to the Matadors, earning only one win. Nevertheless, Redwood was able to show up and give Miramonte a few tough matches, such as sophomore Lindsay Dubin in singles, freshman Chloe Chang in singles and Watridge and Ong Bamola in doubles. The girls’ varsity tennis never backed down, going at the Matadors relentlessly.

Although the Giants didn’t win, they did prevail through the heat, giving them more physical and mental toughness for upcoming matches. Despite the loss, the Giants look to take this competitive spirit into their first league match against another tough opponent, the Branson Bulls, at Redwood on Tuesday, Sept. 5.