The football field glowed yellow and green as students ran across the 50-yard line. Dark bodies, contoured by glow sticks circling their necks, dodged each other as they raced toward a luminescent flag on the opposite end of the field. Glow-in-the-dark capture the flag had begun.

Redwood Night Live (RNL), a club that aims to change social norms around binge drinking at Redwood through active weekend events, held their second annual glow-in-the-dark capture the flag event last Friday. Despite windy weather conditions, the club saw a decent turnout at the event, with around 70 participants, according to junior and club president Olivia Carpenter.

After spending the majority of the evening sprinting across a glowing football field, students flocked to a fire pit for free s’mores and warmth from the night’s frigid gusts.

Participants in the event said the night was a great way to bring the Redwood community together. 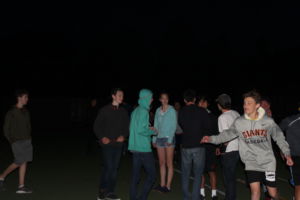 “It’s a good school spirit environment with lots of happy people,” said freshman Lauren Halsey, who said she  decided to show up because she hadn’t been to anything like it before.
Many participants also attended to defy the social norms associated with drinking. Senior club member Kellie Lawler said she wanted to expand her horizons into doing more community-based activities that Redwood Night Live promotes.

“A lot of these kids probably just drive around trying to find something to do tonight and that’s very common. Once they come here, it gives them something to do and lets them hang out with their friends and have fun. They don’t have to be using any substances to have fun,” Lawler said.

According to Lawler, the RNL club has put on student-based activities since 2011, including  a popular dodgeball tournament in the fall. However, the club has begun to expand its audience beyond the student body, and is now focusing some of its attention on informing parents about the drinking and drug culture at Redwood.

Members of the club created a parent panel in January that provided parents with information on how their actions affect their children’s drinking and drug habits, as well as  giving perspectives on sobriety in high school from a teenager’s point of view.

“Drinking should be something that is talked about rather than just completely kept secret,” Lawler said.

According to Lawler, the Redwood Night Live club plans to continue with their student-based sports activities next school year, as well as the parental outreach.