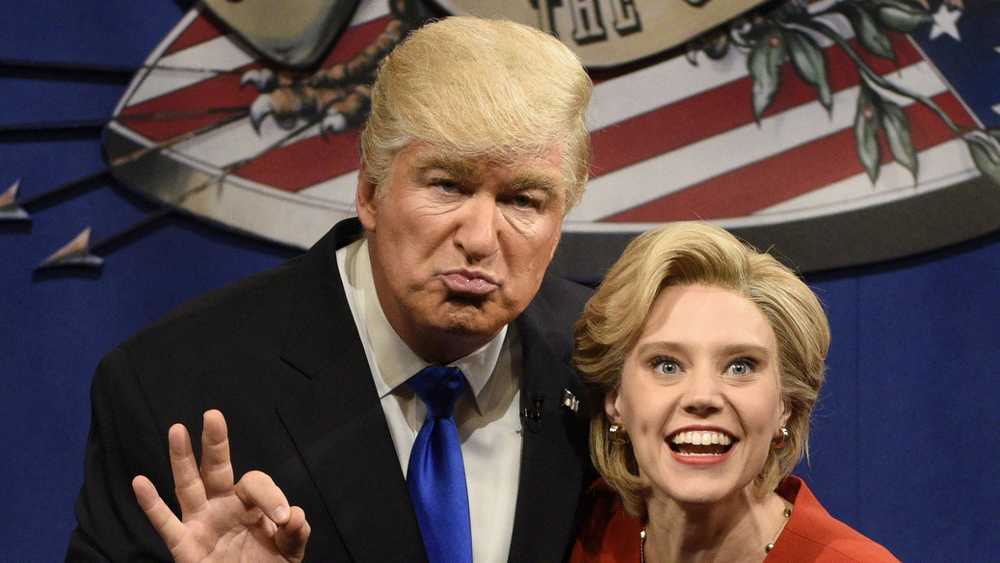 On Oct. 11, 1975, the first episode of “Saturday Night Live” (SNL) aired on NBC. Ever since then, SNL has led the way in political satire and late night comedy, from Chevy Chase’s portrayal of clumsy Gerald Ford to Kate McKinnon’s Hillary Clinton.

With the present increase of media, SNL and late night comedy have gained an increased platform to spread news to viewers. In 2016, two out of ten adults were likely to still read from a print newspaper, according to the Pew Research Center. This is about a seven percent decrease from the previous year. The number of adults reading news online is nearly twice that number, at about thirty-eight percent, according to the Pew Research Center.

Twenty five percent of students consider SNL a news source, despite its widely recognized liberal bias and satirical style, according to a March Bark survey. Season 42 of SNL premiered with a 7.7 out of ten rating on Oct. 1, 2016 with a politically-driven lineup and Alec Baldwin’s notorious first appearance impersonating President Trump, according to IMDB. In contrast, the 2015 premiere only achieved a rating of 6.3. The surge in popularity of SNL during the recent election and leading up to Trump’s inauguration provides entertainment for nearly all political parties, but it can be misleading.

Senior Austin Torney, who generally considers himself a Republican, believes SNL should not be a primary news source.

“[SNL] is more of a way to spark your interest on what’s currently happening,” Torney said. “For people to get a greater understanding of things going on around them, they should try to find a non-opinionated source.”

Comedy shows offer many students and Millennials a more interesting way to educate themselves on the daily political facts aside from reading the news, however it can lead to false impressions.

Sophomore Clare MacMillin identifies herself as a Democrat and supported Hillary Clinton throughout her campaign. While she considers SNL entertaining, she also believes viewers should be cautious of relying too much on satire.

“My sister a few times has quoted SNL and my mom has to say that it’s not true, that it’s just to make people laugh,” MacMillin said.

In the 2008 election, Tina Fey’s portrayal of Sarah Palin brought a lot of popularity to her skits. Fey used a mixture of scripted lines and quotes Palin said to further blur the line between fiction and reality.

An experiment done by political science professors at East Carolina University explored “The Fey Effect,” or supposed relationship between Vice-Presidential candidate Sarah Palin’s decrease in approval ratings and increase in popularity of the SNL skits portraying her. Their findings demonstrated that young Independents and Republicans were less likely to support Presidential candidate John McCain after watching SNL mock Palin, according to the Washington Post.

SNL’s depiction of Trump appears to have had a similar effect. According to the same Bark survey, 25 percent of students reported having more negative views of Donald Trump and his cabinet after watching SNL skits in the last six months.

“If you’re young and impressionable, yes [SNL can influence politics]. When you’re not sure where to get the most accurate information, you might believe what you first hear…which might not always be accurate,” MacMillin said.

Britt Block, a Redwood drama teacher of 26 years, believes that facts are the best way to justify your opinions in this era of mass politics.

“In the current environment, the most important thing is… to find out what the facts actually are. And sometimes that means going two or three sources beyond what’s presented to you,” Block said. “To really take personal responsibility, to be sure that the source is real and to get out of outrage manufacturing.”

A recent Stanford study from last Nov. found that about 80 percent of middle school students were unable to determine the difference between advertisements and news stories, according to the Wall Street Journal. With the increase in technology comes the increase in click-bait, wasted hours, and confusion regarding many important news issues.

Torney agrees with the ideas of educating oneself on the facts before formulating an opinion.

“It’s very liberal to a point of almost blind acceptance here. When I see a situation, I try to read both sides,” Torney said.

While some students are yet to read countering sides of politics, both parties have attempted to harness the power of comedy to gain popularity and votes over the last 40 years.

Richard Nixon appeared on the show “Rowan & Martin’s Laugh-In” and even debuted the show’s catch-phrase (Sock it to me) along his campaign trail, according to Time Magazine.

Presidential candidate Al Gore refused to accept the rigid image and mockery of his lock box ideas and consequently sent a team of writers to SNL to censor other skits he was in.  However, President Bush adapted the phrase “strategery,” coined on SNL, and used it frequently during his presidency, according to US News.

Democratic nominee Hillary Clinton and President Trump both appeared on SNL during their campaigns. President Trump hosted an episode and Clinton made a guest appearance.

While recent political events have offered comedians a constant flow of new material, some believe that they could also be the downfall of political satire. Torney believes shows like the Tonight Show further separate the political divide after the election, by focusing solely on one side of certain issues.

“If you watch the Tonight Show, it’s 100 percent one sided,” Torney said. “When it comes to political things, I don’t think it should always be you versus me. I don’t think that someone is 100 percent liberal or 100 percent conservative. People are somewhere in the middle.”

Late night comedy has been successful in the past, and continues to gain traction in the epoch of  “fake news.”

The effect political satire has is ultimately dependent on the individual, however students should be wary that laughter may have more effect than meets the eye.

“It’s pretty telling that a lot of people trust comedians to deliver the news more than they trust the media,” Block said.