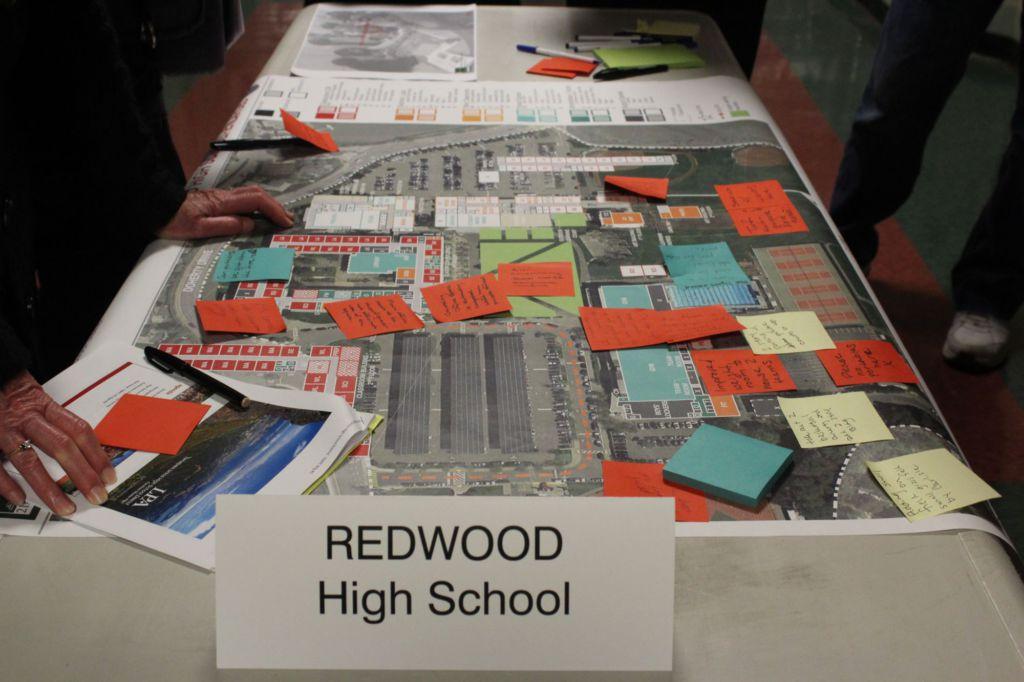 Covered in sticky notes, these plans showed critiques from community members on the current layout on campus.

On March 16, a meeting was held by the Facilities Master Plan Committee in the Kreps Center at Redwood to edit and enhance the plans drawn out for additions to all six schools in the Tamalpais Union High School District, including the Carlisle Building, where adult classes take place. The Education Center (district office) and the corporation yard, the center location for utilities and maintenance of the schools, will also undergo remodeling.

Some of the plans for student growth accommodations are scheduled to be completed by the 2017-2018 school year, while other projects like parking and restroom additions are more long term. Parking at Redwood, however, is not included in the renovation plans, as it was not voted by the stakeholders as one of the most important things to renovate on campus.

Drake, Redwood, Tam and Tamiscal are all scheduled to get new portable classrooms by the start of the 2017-2018 school year. Redwood is receiving 18 portable classrooms with three or four new restrooms. The portables will be located behind the main gym and next to the garden and tennis courts, according to the current plan.

These plans were first introduced in Sept. 2016, and the first step for the architects was to get a feel of the schools.

“We went into almost every single space and we talked with all the different departments at the district,” said Jim Kisel, an architect on the team from LPA, the firm that is making the plans for the renovations. “The most important aspect of this plan is [that] it needs to be the district’s plan.”

Kisel said that the community’s input in the process of making the plans was one of the most important things they had to consider.

“Over 1,300 people have contributed so far. That was one of the things that the board charged us with, to engage with as many people as we could in the process,” Kisel said.

Eighty-nine people participated in the executive steering committee, Facilities Master Plan committee and Town Hall meetings.  Thirty-eight people from focus groups, which are groups of students and staff set to discuss issues and projects going on around the school, were also involved. The largest engagement, however, came from online surveys and school site committee meetings, racking up another 1,255 participants.

LPA Inc. asked the principal of each school what the main focus of the construction should be, because each campus has different issues to focus on during the renovation. Surveys were sent out to collect that data, with Redwood’s top priorities being interior appearance, moveable furniture, sufficient staff workrooms, shared areas fostering school community, seamless and consistent wireless access, safe indoor environments for students and shared faculty workrooms near classrooms.

All proposals and layouts originally drawn up were first drafts, because LPA and the focus groups were hoping to get as much feedback as possible from staff and the community before creating additional drafts. With the input, they hope to expand upon and change plans to fit what works best for each school.

The major expansions to classrooms will be done to accommodate the number of students projected to attend in the upcoming years. At Redwood alone, the predicted enrollment is supposed to jump to 2,154 students at its height in the 2021-2022 school year, according to LPA.

With these extensive new plans comes a large budget. The predicted budget as of now is slightly more than $300 million. Out of that $300 million, nearly $108 million are allotted for the renovations taking place on the Redwood campus, with the rest going to the other six locations.

Of this budget, 75 percent is construction and labor and the other 25 percent is soft costs, which include inspections and other steps not directly part of the renovation itself.

The costs for renovation are exponentially high in Marin are because some of the campuses are located on bay wood, which requires additional structural support, according to LPA’s presentation at the Facilities Master Plan Committee. With this being said, these predicted costs still came in lower than expected, according to Kisel.

Long term plans include renovations that are more cosmetic and less urgent. At Redwood, these include teacher workspaces and conference spaces, along with more counseling offices and staff rooms. Throughout other TUHSD campuses, landscaping, student congregation areas and mechanical fixes will be executed in upcoming years.

The final plans are scheduled to be presented in May. Once approved, LPA and the district will begin to determine how the project will be funded. The full project is expected to take five years, and further details and meetings agendas can be found on the Tam District website.