Senior ballerina reaches out to community 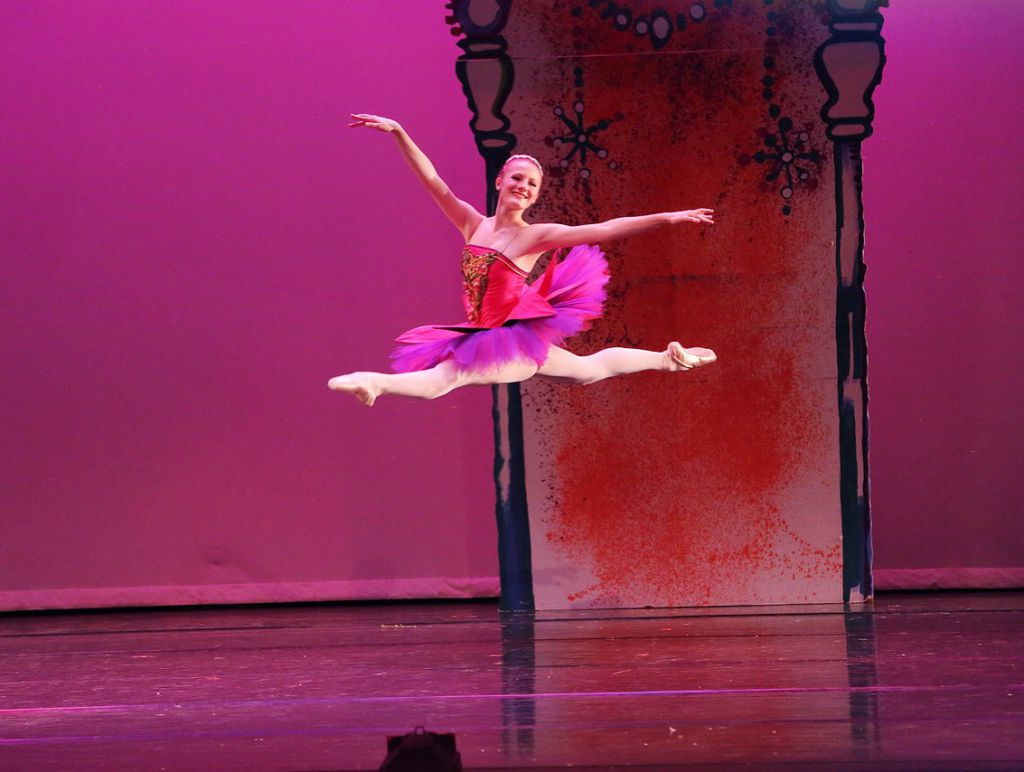 Gaudin dances as rose queen two years ago in the nutcracker. Courtesy of: Mark Strassman

For two weeks each summer, senior Lily Gaudin spends her days at Stapleton School of the Performing Arts, teaching young ballerinas to follow their passion for dance as she did for 12 years. Rather than continuing her own dance career, Gaudin has fostered her passion of dance through her nonprofit that gives underprivileged girls the opportunity to practice ballet.

Gaudin’s project started about five years ago when her eighth grade teacher assigned a community service project to her class. For her project, she chose to volunteer at Performing Stars of Marin (PSOM). The organization was founded by Felecia Gaston with hopes of giving children an opportunity to be exposed to and taught the arts. When Gaudin first volunteered, she began teaching ballet to underprivileged kids at PSOM. After volunteering, Gaudin was inspired to expand upon Gaston’s program by creating her own two week summer camp to give these girls a chance to continue dancing.

“It was only supposed to be for  a community service project, but I was really inspired by what [Gaston] does and I wanted to further it. I talked to [Gaston] and talked to my dance company and they donated two weeks of studio space in the summer and I created a summer program for the the kids,” Gaudin said.

After fundraising with fellow dance students, Gaudin raised enough money to establish her own summer dance program. Gaudin cited Gaston as the inspiration for her program to help make others’ dreams a reality.

“[Gaston] is really involved in everything in Marin City, and I really saw she was making a difference in the lives of those children and I wanted to be a part of that,” Gaudin said.

When Gaston founded PSOM, she provided opportunities for children to be involved in the arts. Gaston not only educates and inspires the kids regarding the arts, but also serves as a mentor for them.

“Just being able to help and seeing the smiles on the kids’ faces has changed me,” Gaston said. “Gaudin has been a true leader and teacher.”

Gaudin stopped dancing fairly recently, but she enjoyed her time working at her summer program. Gaudin explained that ballet has always been a part of her life, so not continuing with dance would be difficult.

“I have been super dedicated to ballet all my life and I wanted to branch out a little, because I thought ballet was taking up a lot of my time. I also wanted to try something new, but ballet will always be a part of me,” Gaudin said.

“[Gaudin] has worked hard and she is one of the most wonderful people. She represents our school in the most positive way and she works well with the kids,” Stapleton said.

Before Gaudin goes off to college, she hopes to continue her program by passing it down to two Redwood sophomores, Emily Sweet and Kaitlin McGrath, who are current dancers at Stapleton.

“[Gaudin] did such a great job with the program that [Sweet] and I just hope we can continue that because the goal is to just keep the program going, since it has been going really well,” McGrath said. “When I have helped out I have only been an assistant to [Gaudin], but it is really fun to see the girls and see them get better.”

Heading off to college, Gaudin knows her program will continue to thrive under new leadership. While the program approaches its fourth summer, Gaudin hopes McGrath and Sweet will enjoy teaching and running the summer camp.

“I hope I have inspired some girls like [McGrath] and [Sweet], because when I did this for the first time, it really hit me how much of a privilege it is to do ballet,” Gaudin said. “It made me sad to think that there are other little girls who don’t have the money to pay for classes who have the same passions that I did, and I just wanted to at least give some of them an opportunity.”