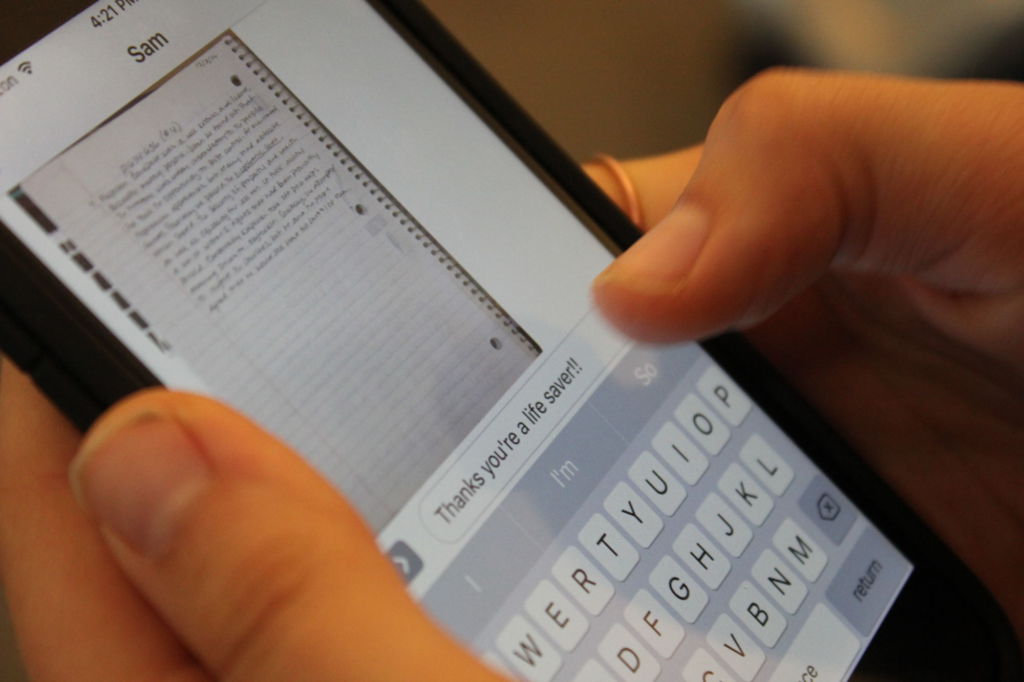 What is it that leads students to neglect their own thoughts and brainlessly transcribe someone else’s for a passing grade? Similar to the bubonic plague, smallpox and Ebola, copying homework is the next epidemic, and it’s already here.

Increased technology use has contributed to the simplification of copying homework. In 2015, 64 percent of American adults owned a smartphone and the number for minors was hypothesized to be even more, according to the Pew Research Center. Another study in January found that now nearly 77 percent of American adults own a smartphone, presumably with an increased number for teenagers.

The recent Bark survey found that nearly five times the amount of students copy homework daily than three years ago in a 2014 Bark survey of similar caliber.

Sophomore “Erica” who wished to remain anonymous, admitted to copying homework a few times per week and addressed the prevalence of copying homework. Though Erica copies homework, she has been able to maintain passing grades in all of her classes, causing her to question the value of homework in the first place.

Erica, along with 13 percent of students, according to a March self-representative Bark survey, admit to receiving homework a few times a week. Erica mostly copies homework via texting.

Chemistry teacher Marissa Peck recognized that copying homework was more difficult without the use of technology.

“[Copying was not as frequent when I was in school] mostly because we didn’t have phones that took pictures,” Peck said. “The main change I’ve seen over the last few years is that students take a picture of [homework] on their phone. I see students with someone else’s assignment pulled up on their phone and they’re just wholesale copying off of it, and that’s very frustrating.”

Guidance counselor Candace Gulden attributed the increase of students who copy homework to the intense academic culture at Redwood.

“I think students [copy homework] because they’re overwhelmed. One thing that I wish students would do is recognize that homework is there for you to practice and learn, you’re not really gaining anything by copying someone’s homework. You haven’t learned anything, you haven’t gained any skills,” Gulden said.

Peck stated that copying does not serve the ultimate purpose of homework: to learn and understand the classwork.

“I definitely have seen [copying]. I myself found that you don’t learn it as well, and it’s harder down the road,” Peck said. “I’m not assigning homework so they have more to do. It’s to reach the goal of learning something.”

Peck grades a few assignments for each unit of Chemistry based on accuracy, which could arguably increase pressure on students to complete assignments correctly. However, she believes it allows her to see where students are, and for students to self-evaluate.

“I make that decision to check in and see how students are doing, to give students more feedback from me so that they can understand better where they’re making mistakes, and to know if I need to teach something. Teachers need to get feedback too, if I need to focus on one area. It’s for the students, but it’s also good information for me,” Peck said.

According to the Tamalpais Union High School District Parent/Student Handbook, repercussions for copying work can be severe. The handbook states that cheating can be grounds for suspension and even expulsion. Despite these dangers, 10 percent of students self-reported in the March Bark survey to copying homework daily. In 2014, only 2 percent of students did so in a Bark survey.

As a teenager’s prefrontal cortex and brain continue to develop, decision making is often impaired and taking risks is more appealing as it produces more of an adrenaline rush. Copying homework doesn’t exactly get your heart pumping, but students are still widely unaware of the consequences that come with copying homework, especially when their main focus is getting a passing grade. Because it is such a common occurrence, cheating doesn’t have any negative connotations

Erica stated that sometimes she even copies homework in class. Teachers like Peck use a variety of ways to minimize cheating during classes and especially on tests. Peck makes four different versions of tests to assure that students at the same table are not tempted to glance at another paper. In the future, she hopes to even add variety to homework assignments and incorporate more open ended questions which are more difficult to replicate from another student.

While the consequences can be extreme, some students use copying homework as a way to understand material with more clarity, since they can model their homework from the correct answers. Erica said she is more likely to do homework if there is an answer key accessible for her.

“Sometimes I don’t know how to do [the homework], but if someone else shows me, I can figure it out from their

Erica began copying homework in the early years of middle school. This year, she has began asking for homework from her peers more often with a busier schedule and harder classes. Not all of Erica’s classes correct homework before testing, and she believes that seeing other student’s work can be a good tool for studying and checking her own knowledge.

Forgetting your moral compass and succumbing to the rampant cheating has become a routine high school experience.

Gulden continues to reinforce her ideas to minimize cheating at Redwood, including helping students find their limits before they are pushed too far.

“I wish that students could see that big picture,” Gulden said. “I wish students would take a less rigorous schedule so they could focus more on learning each subject.”

However, despite the clear immorality of copying homework, one must wonder why they resort to this.

Many staff members recognize the intensity of Redwood’s cutthroat academic culture. However, faculty still have to teach a full curriculum and with students all taking various classes, it is difficult to optimize the homework load so that it is balanced for all students.

“I think there’s a combination of things going on. I think students specifically here have a lot on their plates. I do understand that when [students] get home they have sports, or drama commitments, or music commitments, or jobs. They have a lot of things they need to do and obligations,” Peck said. “Sometimes [cheating] is easier to do, and students need to do it.”

Gulden said despite hearing about cases of copying homework, it generally does not affect her written college recommendations, unless she encounters a repeat offender. Even then, Gulden generally works with students to get to the bottom of their issues.

“A lot of what we’re learning in school is to be able to function as an adult. I can’t just cheat off my colleagues or copy their assignments, you have to learn to be able to do these things on your own,” Gulden said.

Ultimately, students all develop unique paths through adolescence. Developing a habit of cheating creates a lack in work ethic and persistence that can halt student’s futures.

However, copying homework is a daunting issue to fix. In the last three years, the percentage of students copying homework has increased significantly, and the advances in technology will continue allowing for easy, accessible sharing. Copying homework may be immoral, but the workload students face and lack of work ethic will be the influencing factor on this generation’s leaders.