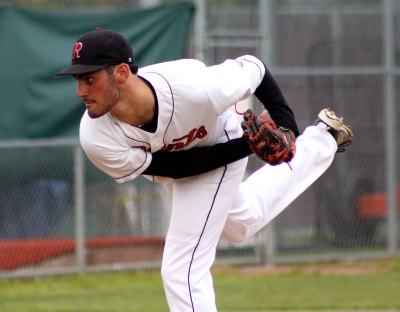 Following through on a pitch, Zach Cohen makes an apperance his senior year.

Baseball is America’s pastime. As winter turns to spring, young boys and girls dust off their cleats and get ready for another Little League season. At the high school level, the season has already begun. Although Redwood has enjoyed some early success, beating Justin-Siena 4-0 on the 31st, they lack multiple key seniors that graduated last year and are now playing baseball at the collegiate level.

Zach Cohen and Zach Kopstein, two members of Redwood’s 2015 North Coast Section (NCS) championship-winning team, are now enjoying their second semester of college and have officially begun their freshmen campaigns for their respective universities. Cohen, who pitches at New York University (NYU), saw some game time and pitched in two of NYU’s first five games. Kopstein, a pitcher at Massachusetts Institute of Technology (MIT), made his first appearance on the 17th and pitched four shutout innings, only giving up one hit and recording four strikeouts.

The season has just started, and Cohen and Kopstein are adjusting to the daily grind of college baseball.

“The schedule is much more intense than in high school,” Kopstein said in a phone interview. “In California, we didn’t have to worry about ice or snow and we could play all year long. This offseason, I had to practice mostly in a gym and because we have to wait for spring, we’ll end up having around 40 games in about 60 days.”

Cohen describes the atmosphere as being much different than his high school baseball experience.

“Although Coach [Mike] Firenzi did a good job of igniting a fire and giving us passion for the game, it’s not every kid’s dream to play high school baseball. Now that I’m in college ball, I’m around kids like me that have been working for this their entire lives, and everyone is zeroed in on the game of baseball,” Cohen said over the phone.

Varsity coach Firenzi says that both Cohen and Kopstein’s work ethic and maturity set them apart from the other players on the Redwood roster.

“We had a lot of guys who were about the same size and skill level, but Cohen and Kopstein put in the extra work every day. They were always the first ones to practice and the last to leave and always taking extra reps when they could,” Firenzi said.

The hard work paid off for the duo, as they both had very impressive high school careers. Cohen pitched 216 innings throughout his four years on varsity, earning a 1.78 ERA and tossing 138 strikeouts. Kopstein only played two years on varsity, but pitched 104 innings with a 1.74 ERA and 105 strikeouts within that time.

Although Cohen and Kopstein have achieved their goal of playing at the next level, their academics heavily impacted the recruiting and decision-making process as well.

“At the showcases and camps you go to to get noticed, there’s a lot of small Division III colleges that show up that are very academic,” Cohen said. “If you don’t have a good GPA, they won’t give you the time of day.”

Both Cohen and Kopstein attribute their recruitment to the Head First Academic Showcase, a summer recruiting camp where many smaller colleges come to look at players who have met the school’s GPA requirements.

According to Kopstein, the coaches understand that their athletes aren’t just attending their respective universities for baseball, and that they also need time to study and perform in school.

“I used baseball as a vehicle for my learning,” Kopstein said. “My coaches know that our first priority is academics and baseball is a close second. Playing at a D-III, there’s not going to be many of us who make it to the pros, and my coaches know that so they’re very understanding if you have to miss practice because of school work.”

Although both Cohen and Kopstein hope to enjoy a bit of playing time this season, they understand their role on the roster and are transitioning back to being underclassmen instead of the premier players on the team.

“It’s a little rough knowing that there are guys better than you in the rotation that are getting more innings,” Cohen said. “But I’ve been getting some playing time and the important thing is to stay confident and ready for when your time comes.”

Kopstein explained that because he’s an underclassman, he is trying to find other ways to help out the team.

“Whether it be scoring games in the scorebook, counting pitches or even just being a great teammate, I’ve tried to make a positive impact on our games,” Kopstein said.

Cohen and Kopstein have both enjoyed success so far, with NYU currently 11-4 and MIT now 7-4.

Both teams will be seeing more action in the upcoming weeks, with MIT scheduled to play a three-game series against Emerson College on the 7th and 8th and NYU playing a four-game series from the 7th through the 9th.