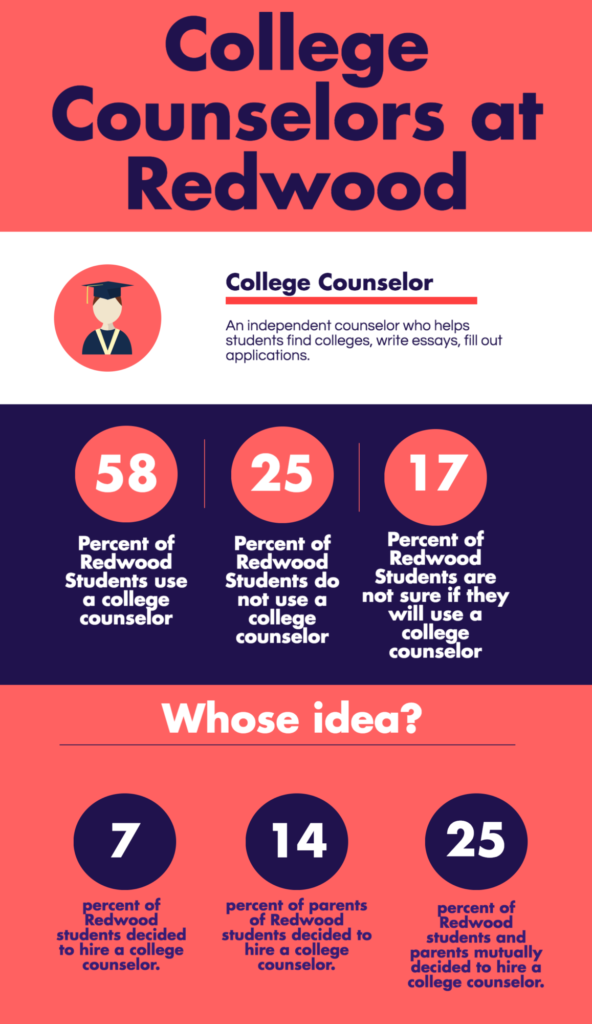 College counselor Linda Perrella says that college applications can be considered as a whole new class during a senior’s first semester. Oftentimes, students and families hire college counselors to help guide them through the process.

College counselors typically help aide students with a variety of aspects including creating a list of colleges, filling out applications, and editing essays, according to Perrella.

Over the past couple years, there has been an influx of college applicants, which has increased demand for college counselors in Marin, according to Perrella.

“I think that there is more demand for college counselors because of a lot of reasons. For one, college is getting to be more and more expensive and also more competitive, so people are looking for an edge for their son or daughter, anything that can help them get in,” Perrella said. 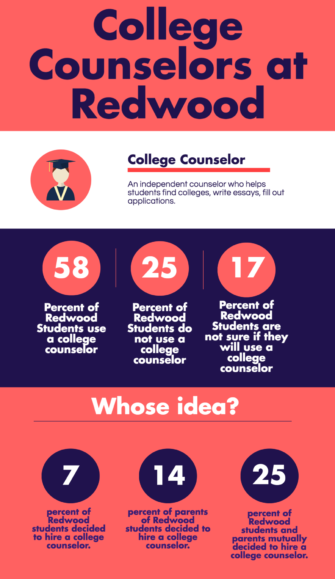 Perrella has been a college counselor for 10 years.

“It was an easy choice. I love working with teenagers, I’m passionate about education and I love helping people,” Perrella said.

Throughout her time working with students, Perrella has seen an increase in competitiveness of colleges.

“Basically, the single biggest reason is that more and more students outside of the United States want to come to our schools. We have the best colleges and universities in the world,” Perrella said, “There are some top colleges outside of our country, but really for the most part students from India and China and sometimes Europe want to come to the United States to get an education.”

“I find that a lot of student tend to gravitate towards what they know, whether that’s school names or majors. I try to say ‘okay let’s start from the ground and work our way up,’” Perrella said.

Perrella usually works with about a dozen seniors every fall.

“I like to keep it to no more than a dozen seniors, although I can’t say no, so when somebody needs help I will also take on a few extra students for the essays. Usually it is about a dozen seniors and working with them for usually an hour a week starting in august,” Perrella said.

Contrary to many students, senior Brendan Shepard decided to embark on the application process without a college counselor.

“I didn’t use a college counselor because I don’t really think it is worth it to do so, unless they are helping with your essays. A lot of my friends who did use them seemed to just get more work, and the counselors didn’t seem to be doing much more than telling them which colleges to look at,” Shepard said.

Whether or not a student uses a college counselor, the process is very extensive, according to Perrella.

Perrella usually recommends a certain number of school, but it is not limited to her specific numbers.

“What I recommend is between eight and twelve schools if they aren’t applying early decision. I do have some students who want to apply to more. There are really no constraints besides their time and how much money their parents want to spend on applications and sending test scores,” Perrella said.

Before students decide where to apply, Perrella likes to get to know her students.

“I typically start with an assessment process because I want to get to know the student better. I want them to get to know themselves better because I certainly see that as a big part of my role as a helping them get a better sense of their interests and their goals,” Perrella said.

While students usually use college counselors to provide them with a list of colleges to apply to, Shepard decided to research himself.

“I feel like everyone should decide for themselves what colleges they should consider and do their own research, because you’re the one who is going to go there,” Shepard said.

Once getting to know her students, Perrella meets with them weekly to edit essays and create resumes until their applications are over.

“I typically look over the essays several times to put comments. One look is just my gut feeling, then i go back to look for general grammar and spelling issues,” Perrella said. “What I am reading it for is through the eyes of the admissions officer, such as what are they going to know about this student when they are done reading this essay and whether or not they are going to fit into this school.”

Senior Estefany Guevara decided not to use a college counselor as well, but got help from teachers and friends.

“I got lucky enough that mrs. Wall was extremely patient and helpful. She was always open to helping me with editing essays or helping me with apps. She never said no and always made time for me. Also, a lot of my friends helped me edit essays and mrs. Maxwell hooked me up with a free essay editor who helped a lot,” Guevara said.

In addition to the several essay students have to write, there are a variety of applications that need to be filled out.

“Another reason we are becoming more popular are because of the different kinds of applications that are now available.  They need someone with the expertise,” Perrella said.

However, before the application process begins, Perrella recommends that students enjoy their high school years.

“I would just encourage students that while they don’t need to be thinking about college starting in 9th grade. I want students to take 9th and 10th grade students to learn what they like and hone their organizational skills and starting to look at schools their sophomore year. Just relax and enjoy it. There are schools out there for every student.”