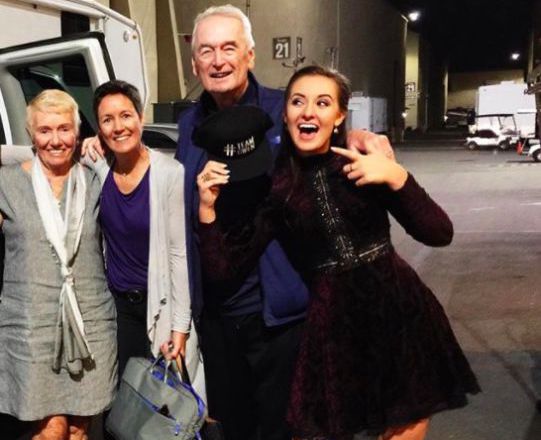 Holding her “Team Gwen” hat, Caroline Sky stands with her grandparents and mom after the audition.

A 16-year-old Marin Academy student, Caroline Sky, auditioned on NBC’s “The Voice” on March 8 in the hopes of progressing as a musician.

Sky auditioned with the song, “Will You Still Love Me Tomorrow” by Carole King, one of her biggest inspirations.

Coaches Blake Shelton and Gwen Stefani both turned their chairs during Sky’s audition, and Sky ultimately chose Stefani as her mentor.

“I was super excited because I’ve been listening to Gwen Stefani since I was five years old. I used to jump around in my kitchen singing “Hollaback Girl.” So, being able to see her in person and meet her and having her say that she wanted me to be on her team; I just felt really honored,” Sky said in a phone interview.

Sky looks up to Stefani for inspiration, as she is a female musician who has been able to impact the lives of many with her music, according to Sky.

“It’s a great opportunity. I’m glad more people get to see her talent. Of all the students I’ve worked with, she’s definitely the most deserving—she’s amazing,” said music teacher and Redwood alumnus Chris Detrick.

Sky grew up in a musical household and began singing when she was around four years old. She participated in a small family band in which her father taught her how to play the guitar and inspired her to sing and write music.

Besides singing with her family, Sky took part in the San Francisco Girls Chorus for 2½ years, which she said aided her performance skills. Additionally, she sang at the Fairfax Festival for the past four years, where she fondly remembers her special performance with Narada Michael Walden, who produced for Whitney Houston and Mariah Carey. According to the Marin Independent Journal, Sky was one of the first teenagers to sing at the IJ’s Lobby Lounge and was the most well-liked performer there.

Sky has also taken the stage with other renowned musicians, opening for the Tedeschi Trucks Band and performing a duet with Joan Baez.

“I’ve been really lucky—there’s been a lot of people who have been really generous in terms of opening a stage up to me. I’m really grateful for everybody who has helped me to do that,” Sky said.

After a great amount of practice and a plethora of performances, Sky felt ready to take the next step and audition for “The Voice.”

Redwood junior Kelly Stadlin, who has known Sky since middle school, said that Sky has always been ambitious.

“She’s always been the person chasing her dreams and not waiting to be a certain age,” Stadlin said.

Sky’s ambitions weren’t affected negatively by her young age because of the format of “The Voice.” Sky admires that on the show the coaches can’t form any opinions about the person based on physical appearance or age until they have first heard the contestant sing.

“Since I was a little girl, I’ve always just wanted to play for people. I’ve always wanted to make my voice heard and I think that music is a really powerful tool in order to effect social change,” Sky said.

The next step on the show for Sky will be the battle rounds, where she will compete against a member from her own team. From there, Gwen will make the decision of who will advance to the knockout rounds.

Sky says that no matter how she does on “The Voice,” she wants to achieve her ultimate goal of reaching people with the power of music.

“As long as I’m able to touch people with music, I think that’s all I ever want to do,” Sky said.

“The Voice” airs on Mondays and Tuesdays on NBC at 8 p.m. This is the last week of blind auditions and the battle rounds will begin next week.