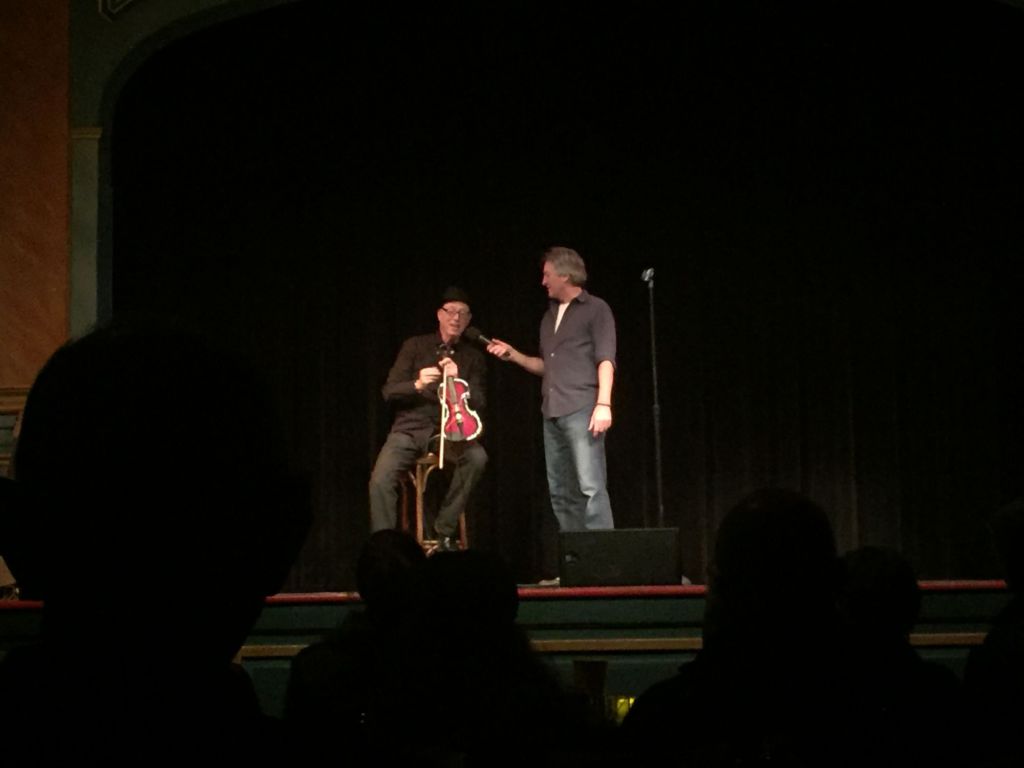 “I didn’t care who won the election last year,” said comedian Patrick Keane. “I just wish half the people who swore they would leave the country did.” The theater filled with laughter. Though that was definitely one of the cheesier jokes of the night, the moment was one of many that made the crowd laugh at “Tuesday Night Live!”

“Tuesday Night Live!” at the Throckmorton Theatre in downtown Mill Valley is a weekly comedy show where professional comedians take the stage and perform. It begins at 8 p.m. and lasts about two hours, making it a perfect nighttime activity with friends and family. Ranging from $17-27 for the show, the price is pretty reasonable and comparative to the price of movie tickets.

Walking into the Throckmorton, I was unsure of what to expect. I had never experienced live stand-up comedy before and was looking forward to a few smiles. The traditional atmosphere of the charming theater lobby—local artwork, lanterns and a concessions stand— did not prepare me for the edgy comedy that was to come. Little did I know I would soon be doubled over laughing.

The comedy alone was enough to keep me entertained, but the atmosphere made the experience even more engaging. In the cozy, dimly-lit theatre, clusters of chairs surrounded small candlelit tables, all facing the large stage. A single microphone, stool and spotlight were on the stage—exactly what I imagined an old-school comedy club to look like.

Six comics, Brandie Posey, Brodie Reed, Michael Cella, Patrick Keane, Jason Love and Dave Burleigh performed on Feb. 21, the night I attended. Many had traveled that day from across California to perform at the event. I was greatly impressed by each comedian’s great talent and wit. These comedians are definitely not amateurs. They are professional entertainers. And though these comedians were just there for the night, it is very likely that each week there are equally talented performers.

Each comedian had their own unique style and sense of humor. The short time slots and changes of pace from one comic to the next broke up the performances, keeping the audience captivated. The host, Mark Pitta, added equally comedic transitions from one performer to the next.

One of my personal favorite performances was by Brodie Reed, an up-and-coming comic from Los Angeles. Reed charmed the audience with his personal stories, and his smooth, casual humor. The most hilarious

Dave Burleigh, who was a contestant on America’s Got Talent, was one of the more acclaimed comedians of the night. He told a hilarious story about taking a dog to the airport and captured the audience with his famous impressions, including a karaoke session as Donald Trump.

It was clear that along with new viewers like myself, there were many regulars who came back each week, drawn to the great humor. Pitta made references to both previous nights and his life, making the performance familiar and almost conversational. I can understand why people would return week after week. Comedy is an opportunity to forget stress and obligations, and just laugh.

Some of the comedy was inappropriate for younger audiences, with sexual jokes and explicit language. However, it suited the humor of the mature audience in attendance.

The audience was a diverse mix of adults, teenagers and couples, making it comfortable and welcoming for new viewers. The event was not generational, because like most comedy, the night’s humor had a universal appeal to all walks of life. The comedy brought the audience together. Despite the difference of backgrounds, the unity of the audience was strong as we all burst out laughing at the same moments, and chuckled at the comics’ playful jabs about Marin residents. The audience could also interact with the performers and each other, adding to the lively atmosphere. This created a strong community feel that is hard to create at other entertainment events, where the viewers are simply observers.

Though the event is on weekday nights and may be difficult for students to attend, I strongly recommend it as a break from schoolwork. The moment the show ended and I walked out of the theater, I wanted to go back. The animated comics, energetic crowd and community atmosphere created perfect social entertainment.