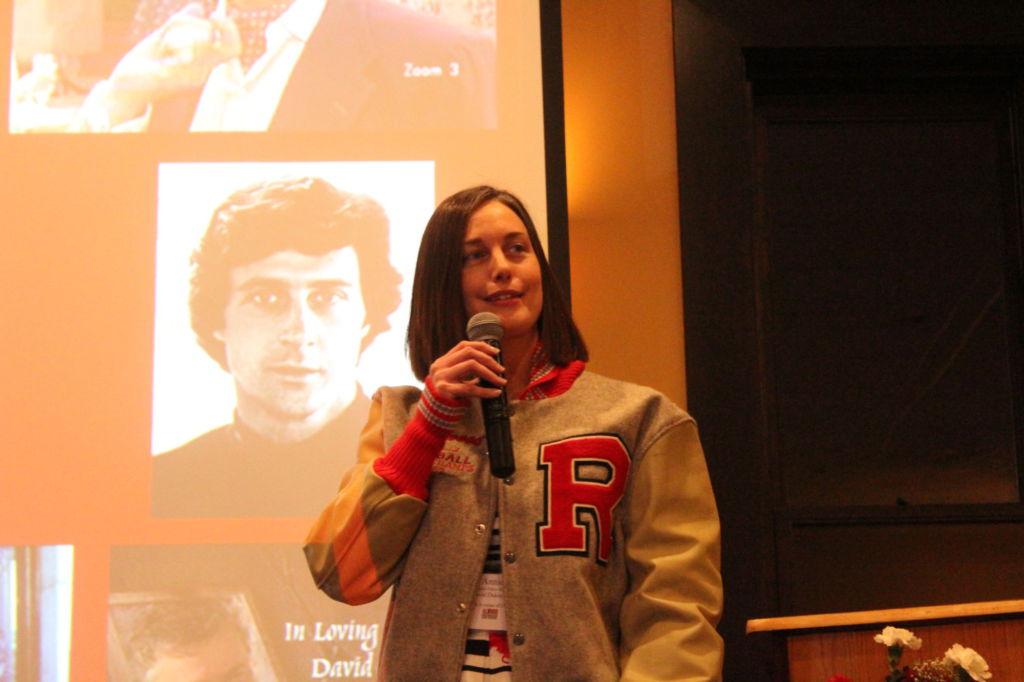 Speaking on behalf of her father who was inducted posthumously, David Dukes (class of 1963)'s daughter Annie came to represent her father at the banquet.

On March 3, the Redwood Distinguished Alumni class of 2017 was honored alongside the alumni class of 2016 at the Avenue of Giants induction banquet hosted at the McInnis Club House Restaurant. The distinguished alumni are graduates who are recognized for demonstrating excellence in their field and who have made a positive impact in their careers after leaving Redwood. Hosted by 2012 inductee Mark Fainaru-Wada (class of 1983) and Redwood Alumni Association (RAA) Co-President Marilee Rogers (class of 1961), the banquet allowed Redwood alumni who graduated as early as the ’60s to mingle with both current and retired Redwood teachers and their former peers.

As co-president of the RAA, Rogers plays a large part in the organization of the banquet.

“It’s so rewarding to connect alumni with the school and to give back,” Rogers said. “Redwood was a wonderful place to be, and it made big difference in my life. I think there are a lot of alumni that feel the same way.”

Three Redwood students participated in the alumni selection process as part of the board that chose the inductees. Junior Luna Zirpoli, one of the three, was inspired by the diversity and level of achievement represented by the body of nominees.

“Being on the committee, I feel so thankful because I’ve learned so much about Redwood alumni and what they’ve done and what you can do just coming from Marin and the impact you can have on the world in so many different ways,” Zirpoli said.

At this year’s banquet, many of the inductees thanked former Redwood teachers for their guidance and inspiration. Mike Kelemen is a current social studies teacher who taught one of the alumni, Rebecca Burgess.

Kelemen remembers Burgess as being a great student and a great person.

“As a teacher, being a little bit of part of helping get them where they want to go feels good,” Keleman said.

According to Kelemen, seeing former Redwood students attribute, at least in part, their successes to their teachers reminds him to stay positive and encouraging during class to ensure that any he has a positive effect on his students.

“You don’t know what impact you have on them, and sometimes it’s much later down the line that [your impact] becomes apparent,” he said. “It’s kind of gratifying to see all of these people and what they’ve done.”

At the close of the banquet, Jobrani, a comedian and television actor, gave an entertaining and comical acceptance speech.

According to Jobrani, who moved with his family to Marin at the age of seven from Iran in order to escape the Iranian Islamic Revolution, returning to Marin brought back many fond memories. One particular memory involved his grandmother who fled Iran along with his family.

“One time we got word that she was trying to get to the other side [of the freeway] and she did it old school, immigrant Iranian style. She went across the freeway. She didn’t know there’s a walkway. Grandma just went right over and walked across. We get things done, you know,” he said in the speech.

Jobrani’s will not be the last fascinating or hilarious alumni story heard at the Avenue of Giants Banquet, nor is it the first. The RAA was established by Rogers in 2007. The association first made its impact by planning Redwood’s 50th anniversary. Currently, the RAA plans and hosts the Avenue of Giants Induction Banquet and the Redwood Athletics Hall of Fame Banquet on alternating years.