Cohen gets ‘tide’ up in the surfing lifestyle 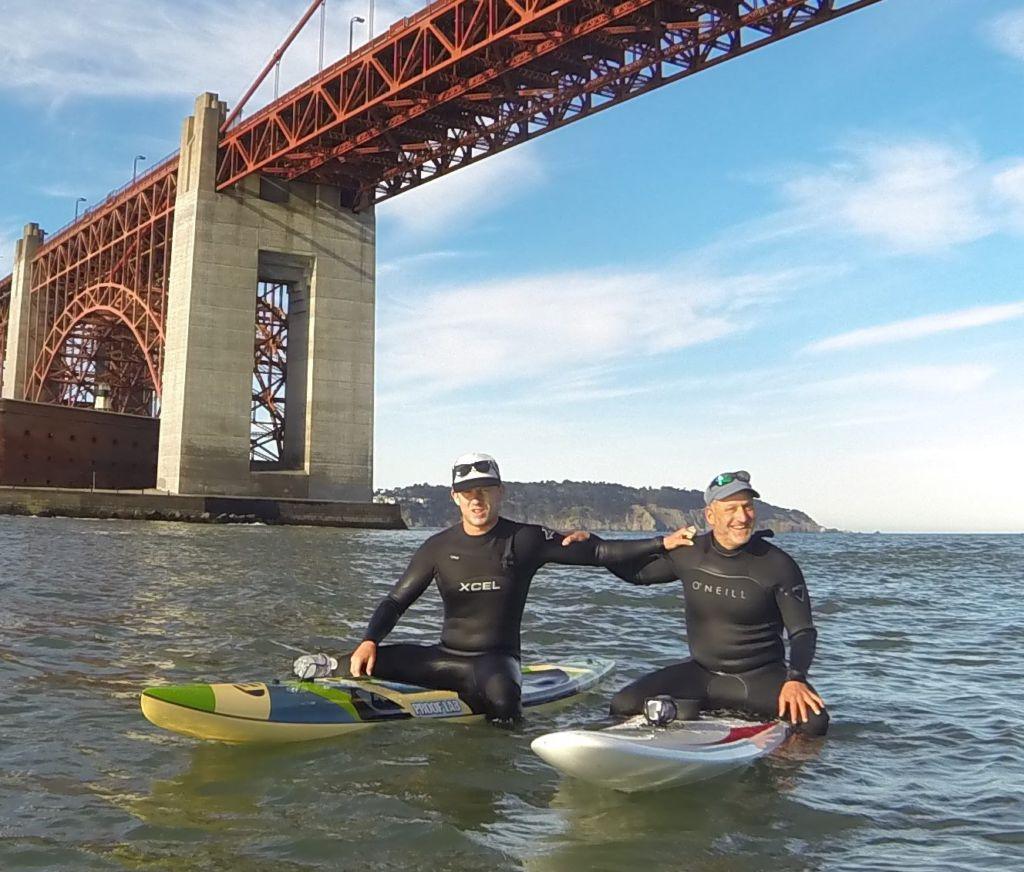 Holding on to his son Zack's shoulder, Cohen rides his board under the Golden Gate Bridge.

The waves were big that day off of Ocean Beach, most some ten feet high. Tall swells rolled toward the shore, building and peaking before breaking near the shore, sweeping over the shallows as white foam. Two figures, dots in wetsuits, rose and fell with the waves, holding onto their surfboards, paddling for the horizon. A set of tall waves was moving toward them, and they had to pass it or risk being swept back into shore.

When the wave reached them, Mitch Cohen watched his son stroke his way up the face of the wave. He paddled slightly behind. And as he watched, just as the boy neared the top, a dolphin shot out of the lip of the wave and leapfrogged him.

It wasn’t the first time he’d seen a dolphin. Nor would it be the last. Cohen, 54, a downhill and cross-country skier in the Colorado Rockies, backpacker and hiker in the Andes and surfer and mountain biker in the Bay Area, has always lived within driving distance of nature. The wilderness is part of his life.

When he isn’t surfing, hiking in the Sierras with friends from Oregon, or mountain biking on Mount Tam or in China Camp, Cohen teaches AP Environmental Science and Integrated Science 1-2. But these two spheres of his life—outside and inside the classroom—overlap more than they diverge. It’s Cohen’s direct immersion in the natural world that drives him to teach about it.

“When you’re a couple hundred yards off the coast of San Francisco, it’s a wilderness area,” Cohen said. “It’s as wild as any place you can find on the planet, in the sense that I’ll see a pod of dolphins that’ll come within arm’s reach of me, or a whale breach maybe 10 meters away.”

Cohen’s love for surfing stemmed first from his love of adventure. Between his sophomore and junior years of college, he took a semester off and bought a one-way ticket to Bolivia, hoping to learn Spanish and hike in the Andes.

That trip was the first in a long string of such endeavours. After finishing his undergraduate studies at the University of Colorado-Boulder, he went on to visit Peru, Ecuador, most of Central America, Mexico, India, Nepal, Kenya, Tanzania, Morocco and Egypt. He also taught English as a second language in Spain.

“Growing up, my passion was always downhill skiing and cross-country skiing, but in Colorado I really got into snow-skiing and backpacking and a little bit of climbing—nothing super technical, but just being in the mountains,” Cohen said.

Boulder, with its close proximity to the peaks and ski lifts, was a perfect region for Cohen. But when he moved out to California to receive his master’s degree in education and teaching credential at Stanford University in 1989, he found himself in an entirely different environment.

“Moving out here,” Cohen said, “It’s just a lot more of a hassle to go skiing here than say it was in Colorado, and that’s when I started surfing.”

When he discovered surfing, Cohen was well past his college years. But he took to it quickly; it filled the absence of his old mountain sports and fit perfectly into his active lifestyle.

Surfing, for Cohen, is a sport that lends itself well to spontaneity. It requires none of skiing’s lift tickets, heavy traffic, complicated logistics or expensive accommodations.

“The great thing about surfing is I can wake up early, go surfing for three hours, and be home for lunch. I’ve all but stopped skiing because I enjoy surfing so much,” Cohen said.

Though Cohen didn’t mention it, surfing in the Bay Area isn’t always a glamorous pastime. Water temperatures in the Pacific around San Francisco hit an average annual high of 57 degrees in June, and an average low of 53 degrees in February, according to the National Oceanographic and Atmospheric Administration. Often, this means donning a thick wetsuit to brave the surf.

In spite of the conditions, Cohen finds a great deal to love about the sport.

“Aside from the adrenaline rush, there’s the camaraderie. I still go surfing with my son, and it’s a way for us to hang out together,” Cohen said. “And on big days, we might be a quarter mile off shore maximum, but the wildlife comes in, and that’s exciting. I love the wildness of it.”

Surfing is a social sport for Cohen. He has friends up and down the California coast whom he met while on the waves. Often, he will see people he knows when he shows up at the beach, even if he hasn’t made plans.

Cohen has even run into some of his own students in the water, including juniors Jesse Smith and Will Kepler. Kepler recalls a day he had driven to Ocean Beach with his friends after hearing that the waves were going to be good.

“We ended up at the parking lot up at Ocean Beach, and Mr. Cohen was there, already in his wetsuit,” Kepler said.

Not only did Cohen beat his students to the beach, but he held his own out on the water.

“He was pretty impressive, because it was a bigger day than I was used to out there but

he was going on some of the biggest waves of the day,” Kepler said.

“He charges. He will take any wave no matter how gnarly it is, how scary it is,” Smith said.

Smith also remarked that Cohen came to surf with a group of surfing veterans, each holding their own beautiful board. These are just a few of the good friends he’s made at the beach, and that social scene is one of Cohen’s big reasons for loving the sport.

“Where some guys go out to the country club to meet up with their friends, I’ll go to the beach,” Cohen said.

But Cohen didn’t just make friends and meet new people on the beach; he also introduced his son Zack, now 21, to surfing when he was only five years old.

Cohen doesn’t limit himself to surfing just the waves in the Bay Area. Most of the time he sticks to his favorite spots  at Ocean Beach, but during the summers he flies down to Mexico and Latin America on surf trips. In the past he’s surfed in Nicaragua and El Salvador. His son Zach plans to go surfing in Indonesia in the next year.

“A lot of people don’t really realize it, but there’s some world-class surf right here in our backyard,” Cohen said.

That connection with the natural world fuels his teaching at Redwood.

“There’s a lot of really special places in Northern California or beyond that are worth protecting so that future generations can know what it feels like to ride down a hill on a mountain bike, or summit a peak in the Rocky Mountains or surf in water that’s unpolluted,” Cohen said.

Cohen’s role at Redwood extends beyond the classroom. A few years ago, when no one else stepped up to take the job, Cohen offered to coach the school’s water polo team, according to Smith. He’d never coached the sport before.

“At the end of the season, every kid loved him, and they took this one ball, and all of them signed it, and now it’s sitting up in his room,” Smith said.

Cohen believes that part of his role as an authority figure is being a good role model. And at a time when so many high school students stress about college admissions and grades more than enjoying life, Cohen emphasizes the importance of equilibrium in people’s lives. He finds his own balance between teaching and surfing, and suggests that his students find their own.

“Life is a lot about finding balance. My philosophy has always been work hard and play hard. I think that if you’re efficient with your time you can find time to do the things you like,” Cohen said. “I think students need to understand that being an adult doesn’t necessarily mean that you have to give up the things that you enjoy doing.”

Cohen’s love for surf and teaching is a testament to his philosophy. His work ties into his play, and his play ties into his work. That’s part of his conception of balance.

“You can structure your life in such a way whereby you can have meaningful work and meaningful play,” Cohen said. “It doesn’t have to be an ‘either or,’ it can be an ‘and’ situation.”