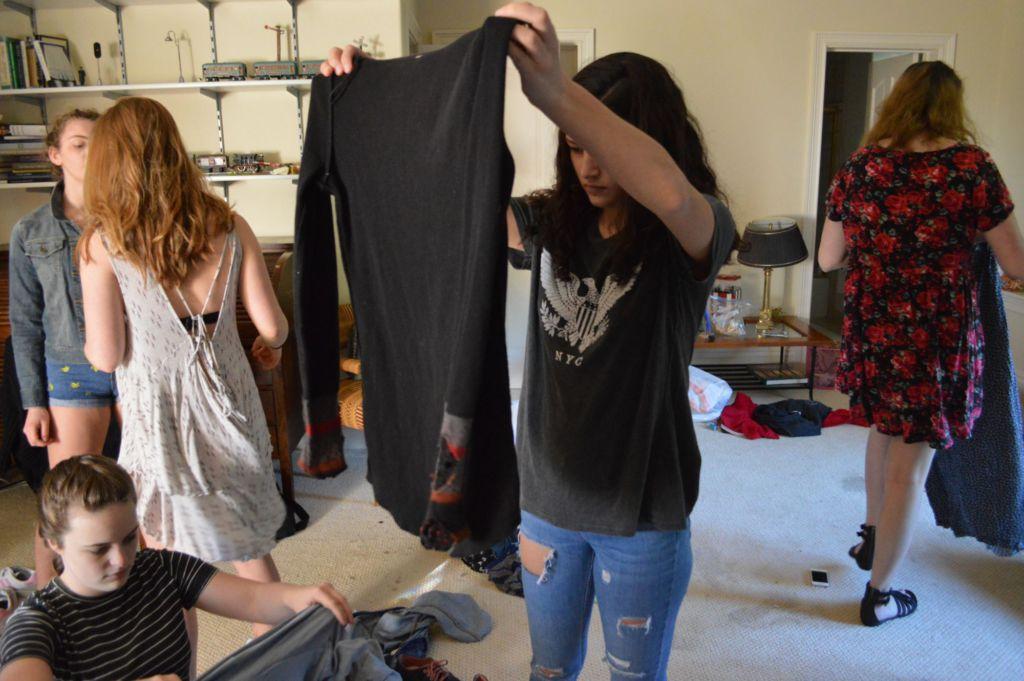 Look down at the shirt you are wearing. Where did it come from? Have you ever considered who made it? Was it sewed by a young girl forced to work long hours with little pay? Or maybe by a teenage boy trying to support his large family? According to junior Ali Janku, 97 percent of the clothes sold in the U.S. are manufactured overseas by the 168 million children who work for them.

The recently-formed Clean Clothes Club strives to raise awareness among Redwood students about these sweatshops through fundraisers, thrift days and clothing swaps.

Their first event occurred on Feb. 11 when the club hosted a clothing swap to promote secondhand clothing in the community.

Over 15 girls, a mixture of club members and friends, showed up with bags full of clothing to trade, most of which were gone by the end of the day. The swap occurred from 2 to 4 p.m. at club member’s house and the leftover clothes were donated.

“The clothing swap went so well, we all got really good stuff and the greater issue of sweatshops aside, it is so fun for us because it is a social event and you get rid of stuff. Everything that wasn’t traded was given to the Salvation Army and it feels really good to give back in that sense,” Janku said.

In 2016, club president Janku went on a year-long clothing strike where she didn’t buy any commercially-new clothes made in countries other than America. Based on her journey, she decided to start this club.

Janku founded the club with the hope of encouraging students to become more educated about the horrors surrounding sweatshops. She believes sweatshops are an issue that many people contribute to, sometimes unknowingly.

“I started the club because I think that sweatshops are a huge issue that often goes unaddressed because it is so easy to turn a blind eye. We all enjoy the benefits of it in the form of cheap clothes,” Janku said.

Janku hopes to motivate students to become conscious of where their money is going towards.

“We will do things to encourage people not to buy things that were made in sweatshops, like thrifting days and clothing swaps, encouraging members to buy American-made clothes and educating people on the travesties on how our clothes are made,” Janku said.

“I love going to thrift shops. All my clothes are thrifted. It was hard for me to find stuff I liked at like Nordstroms and Tilly’s, but I really like the stuff at Goodwill and other stores like that because it is artful,” Arnowitz said. “I think, for me, I like thrifted clothing better because it is more funky. But it is good not to support sweatshops so it is a win-win.”

Junior Talia Fleischman described her experience with the club as extremely positive and supportive so far.

“One man’s trash is another man’s treasure. I brought all my old clothes that I feel so guilty about because they just sit in my drawer and I don’t wear [the clothes]. Somebody put their blood and sweat into that shirt and I just don’t wear it anymore, ” Fleischman said.

“For people who have stigma about secondhand clothes, think about how much more you are saving than just money. You are protesting what the workers have to go through to make a new shirt for you,” Fleischman said.