Teenagers inebriated under the political influence 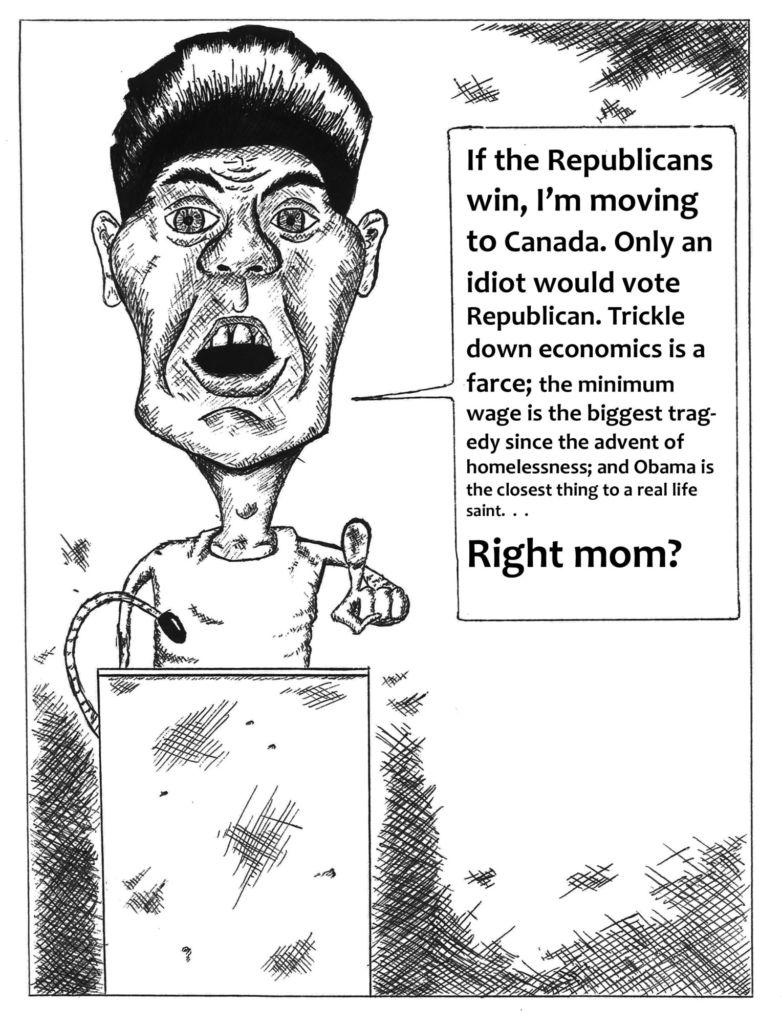 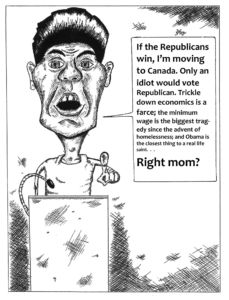 Presidential election season looms just around the corner. Already, late night hosts and news channels bombard the radio waves with the scandals, updates, and announcements from a wide variety of campaigns. The hallways are abuzz with the occasional offhand comments about this presidential candidate or that one, the remarks about the Republican debates, the widespread Trump-bashing―and everyone’s saying the same thing.

This unanimity is an unfortunate aspect of the Redwood political scene. Everyone is chirping to the same tune. There is little, if any, debate. And, what’s more, it seems that many of these voices have little idea what they’re talking about.

Perhaps it’s out of an unwillingness to admit ignorance, or the embarrassment of knowing less than a friend, but it seems that many students, when confronted with political matters (whether they understand them or not) resort to baseless, grandstanding remarks that others will generally agree with.. In strongly Democratic Marin, this often takes the form of disparaging Republican policy.

The political ignorance I perceive arises because few students are willing to challenge the idea that Democrats are in the right and Republicans are not. Students don’t feel the pressure to do their own research or form their own political opinions because their own ideas have never been challenged.

The political homogeneity of the Redwood student body is no surprise; it’s a reflection of its environment. While rural eastern and Central Valley agrarian communities are still strongly conservative, urban regions like the Bay Area and Los Angeles have only become more liberal, according to the Public Policy Institute of California’s Statewide Survey.

Democrats dominate California government offices. Both of California’s senators are Democrats, as are 64 percent of our congressional representatives. In 2008, 61 percent of Californian voters voted for Obama. The California Secretary of State’s office found that in 2012, 84,374 out of the 155,025 registered voters in Marin County registered as democratic, a full 54.4 percent. Eighteen percent registered as Republican, with the rest of the vote split among smaller parties and undecided voters.

It is problematic that so many Redwood students and families have the same opinions because it reinforces and validates political conclusions that students might not have come to on their own. It stifles the opportunity for healthy contrarian opinions to develop. Students continually bolster each other’s opinions, choirs preaching to other choirs, resulting in an obstacle-free political landscape.

I believe that the primary source of political bias for students is their parents. It’s common for students to simply absorb what their parents tell them or what they overhear their parents saying and spit it back out a day later –– I know I’m guilty of this. It’s easier than doing my own research, and the opinions come from authority figures.

However, I implore students not to parrot parents. It’s an unsound way to develop political opinions. The most basic political divisions, liberal and conservative, are so hotly debated because there are so many vastly different opinions regarding current social issues. If students want to make decisions about where they lean now, that’s fine, but it’s unhealthy to do so without challenge and research.

Solidifying one’s political education is integral to making better decisions about government. But with nobody to challenge their beliefs, the risk is that Redwood students will go into situations like college or high school government courses, internet comment sections, or, most important, the voting booth, not having done their homework, instead simply regurgitating their parents’ beliefs.

Students should challenge themselves to do their own research, inform themselves, and make their own decisions based upon their findings. Find infographics on the federal budget. Read up on Republican goals and agendas. Play devil’s advocate when you hear a friend making a claim you agree with.

Additionally, students should alternate where they get their information. Try switching news sources for a week, or for two days every week. A stagnant news feed means a stagnant mindset when it comes to politics.

Step into a place where knowledgeable people with sensible points take issue with your ideas and take up a position opposite yours. Read their articles or columns or watch their YouTube videos –– the way you do it doesn’t matter, just absorb opposing ideas. Come to terms with the fact that not everyone agrees with you like they do in Marin, and familiarize yourself with why they don’t.

There’s no better intellectual defense than knowing the opposition. So get to know it. Change your mind a few times. Decide for yourself what you think of candidate X or candidate Y. Above all, don’t let your parents’ words come out of your mouth. Don’t rely on someone else to do your thinking for you.