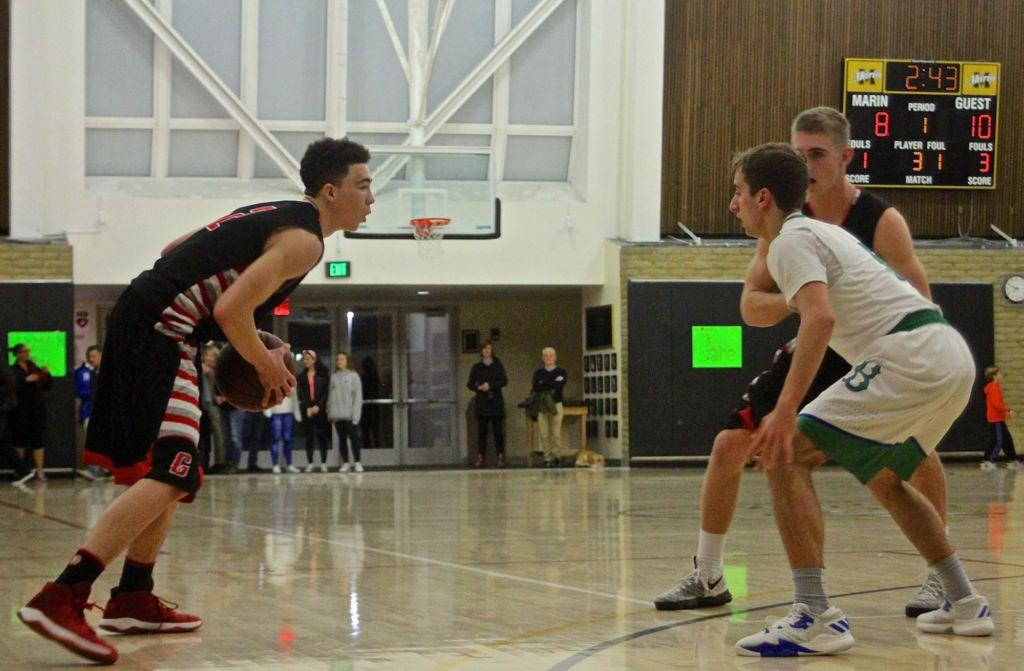 By: Josh Cohen and Adam Kreitzman

Entering the matchup, the Redwood Giants and Branson Bulls found themselves at 8-3 in conference play, making the game vital for the MCAL race with just three games left to play. The first half had the makings of a defensive showdown, as the two teams both have top three  scoring defensive players in the league.

According to senior Charlie Reis, the Giants were happy with how they played in the first half, but adjusted their defense in the second half to focus on stopping the Bulls’ shooters and limiting them from penetrating through the middle of their defense.

The Giants were energized by a halftime speech from senior John Van Liere, and proceeded to play exceedingly well in the beginning of the third quarter, according to sophomore Miles Squiers.

In the end, the Giants seemed to have a little more in the tank as they edged out the Bulls with a final score of 51-37.

Reis was absolutely unstoppable in the paint of Friday’s game. He racked up 19 points while shooting 78 percent from the field, leading all players in scoring.

“If we are ever struggling offensively, we can always count on [Reis] to get us a bucket,” said sophomore point guard Chance Farrell-Martin.

Reis has come alive in recent weeks, proving he is crucial to where the Giants land in their final standings in MCAL.

Defense wins Championships. Redwood has played an impressive stretch of games, frequently holding opposing offenses to 40 points or under. If the Giants can keep up the disciplined defense that they have shown in the past few games, it bodes well for their MCAL run.

No Clear Frontrunner in MCAL. The first place team, Marin Catholic, has two losses to teams close behind in the standings. There are a few teams in the upper-echelon of MCAL, but the playoffs are shaping up to be extremely competitive.

Shot Selection is Important. Redwood is at its best when the majority of its shots are coming from in the key. When the Giants can get easy buckets, they are virtually impossible to beat.

Halftime. Redwood has been able to get out to fast starts in the third quarter, and it did so again on Saturday night, scoring seven  points within the first minute of the second half.

Marin Catholic (MC) Wildcats vs. San Marin Mustangs is an important game to watch. The only game left on MC’s schedule, that it has a realistic shot of losing, is against the third-place Mustangs. The Giants need some help to reach the top spot in MCAL as they find themselves a game behind the Wildcats.

The Giants were scoreless during the first quarter of their first appearance against the Bulls. Redwood was able to make an adjustment not only on the offensive side but also the defensive side during the first quarter of this matchup.
Reis led the Giants in points with 19, going seven of nine from the field and getting to the foul line four times, shooting five of eight there. Redwood’s highest scorer, the last time it faced Branson earlier in the season, was Chris Kress who had eight points, going two for six from the field.
The Giants put up 20 points in the first half and 31 in the second against the Bulls. Those scores are significantly more than what Redwood had the their previous appearance, where they put up 8 in the first half and 19 in the second.
Farrell-Martin recorded three assists to help keep his average 3.3 assists, tying Marin Catholic’s own Joey Calcaterra for the most in MCAL. Due to Farrell-Martin’s foul trouble, four overall, he was only able to acquire three points and two rebounds.
Senior Alex Wilson, averaging 4.9 points per game, scored an above-average 8 points complemented by five rebounds, two steals and two blocks. Wilson maintained his key role in facilitating the Giants’ offense at the high post.

The Giants look to continue their four game win streak at San Marin on Thursday, Feb. 9.