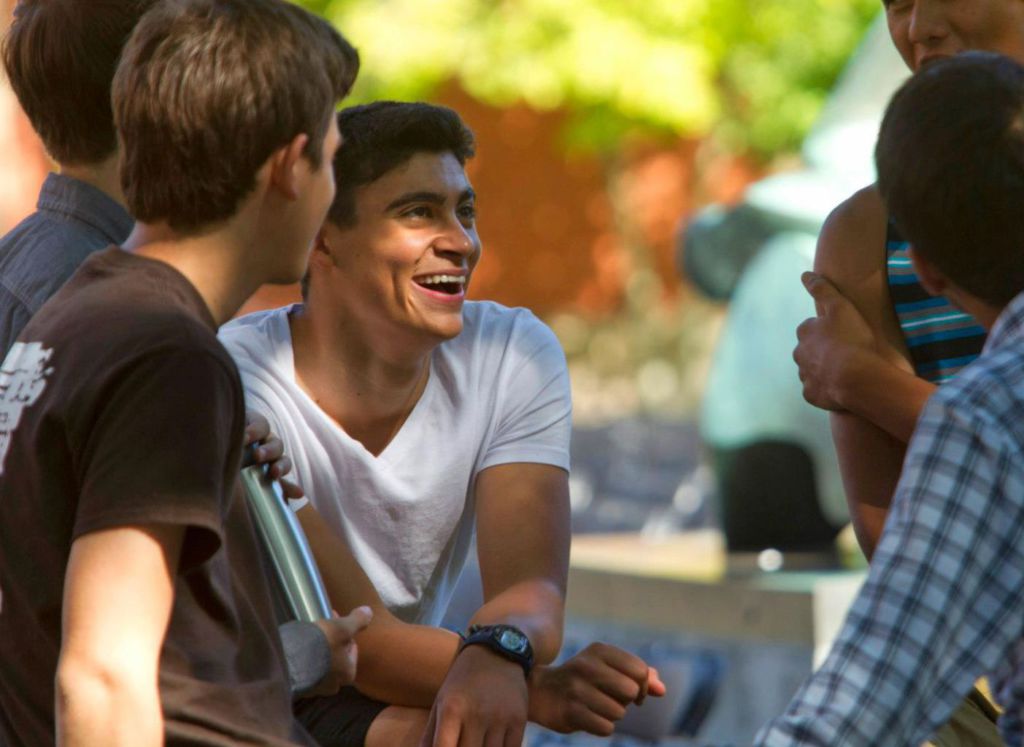 While on a flight from Rhode Island to Texas, 2012 Redwood alumnus and Brown University senior Cliff Weitzman built a photo-sharing application in seven hours that ultimately gained 70,000 users. This was one of approximately 32 products, ranging from a detachable brake for longboards to a biotech supplement, that he created during his undergraduate years. Recently, Cliff, who is majoring in Renewable Energy Engineering, was selected for Forbes’ 30 Under 30 list for his text to speech application Speechify, which will soon be released to the public.

Cliff moved to the United States from Israel at the age of 13 with his family. Prior to arriving in California, he taught himself English by listening to the Harry Potter audiobooks 22 times in a row. He subsequently acquired a short-lived British accent.

When he came to California, Cliff, who is dyslexic, struggled with reading and spelling; however, he got through these challenges in high school by listening to audiobooks instead of reading. He first began developing the Speechify application for personal use during the summer before his freshman year of college. The application enabled the computer to read anything to him at a quick pace, thereby eliminating the difficulty of reading.

“[Speechify] allowed me to read much faster and [it] was also useful because it allowed me to make audiobooks, so I could listen to my philosophy readings while longboarding to class instead of having to stay up the night before having to stare at the screen trying to read,” Cliff said.

Many of Cliff’s peers began to use the application and asked him for a copy of it.

“After I [started teaching others how to use the application], I was like, ‘Okay, this technology is cool. Let me make a video teaching other people how to do it,’” Cliff said. “So 40,000 people watched that video and still I was doing it more as a hack that allowed me to be productive and that other people found useful.”

English teacher John Blaber, who had Cliff as a student his freshman and junior years, said it is thrilling to see Cliff’s success.

“He’s taking his interest in entrepreneurship and software development and his own experiences as a learner and finding ways to synthesize all of those aspects of his experiences, talents and interests and produce a product that is innovative. Simultaneously, he’s going to potentially unlock literacy for who knows how many readers around the world,” Blaber said. “That is a tremendous gift that he has given.”

After Cliff read an academic paper that discussed neural networks, a field within artificial intelligence, he became very excited about the possibility of incorporating neural network technology into Speechify and stopped working on his other projects to focus on the application.

The integration of neural networks into text to speech lends a human quality to an otherwise automated-sounding voice. The sound of the voice is very important to Cliff, as he believes it is one of the factors that deter many people from using text to speech regularly.

“[Conventional text to speech] sounds like a computer speaking to you, which is distracting,” Cliff said.

After integrating neural networks into the software and creating a graphical user interface, Cliff presented Speechify at Brown University and Harvard University and began to receive a lot of interest from various funding sources. He reached out to the principal of a local school for dyslexic students and set up a meeting.

At the end of the meeting, Cliff learned of a conference for dyslexia educators that was being held the next day. He thought it was the perfect opportunity to learn if technology like Speechify would be useful to others and asked if he could come. The principal replied that he could, but that the conference was in Florida. They were in Providence, Rhode Island.

“I was like, ‘Great, see you there.’ So at 3 a.m. I booked a ticket to Florida [and] 10 a.m. I was on the plane,” he said. “[I] arrived, snuck into the conference, snuck into the heads of school meeting and gave an impromptu presentation on Speechify.”

At the end of the presentation, 15 schools offered to fly him out to their locations, some of which were outside of the United States, so he could teach their students how to use the application, marking the beginning of Speechify’s pilot program.

Cliff would visit classes, install the application and return within a week. When he came back to the schools, he observed an exciting phenomenon.

“I’d find every single one of the students used Speechify at home as well as in class,” Cliff said.

He received very positive feedback from both students and teachers.

While talking to dyslexia educators, Cliff learned that many people do not realize it is possible to listen quickly. He utilizes this ability, listening at twice or three times the regular speed, which allows him to go through a lot of material at a rapid pace.

“Very easily, within the course of a week, you can train yourself to listen quickly and it’s just by pushing the speed at which you listen,” Cliff said.

Cliff also noticed that people are not conscious of their ability to train themselves to retain information while listening, especially while doing other activities.

“When I listen, I can drive, I can cook, I can play basketball,” Cliff said. “I can do a lot of things and still listen in the background, but completely absorb everything I’m getting, even though it’s going fast. That’s just a matter of practice, but it’s easy practice.”

Due to its portability and time-saving potential, Speechify is not only useful for people with learning disabilities, but also for anyone who wants to become more productive, forming the significant second portion of the application’s market.

Over the past two years, Cliff spent a lot of time expanding his Computer Science (CS) and graphic design skills. He built Speechify’s Minimum Viable Product, essentially a prototype in product development terms, and received help from others on his Speechify team in areas with which he was not as familiar, such as graphic design.

“Anything that I start, I’ll start it and I’ll build the first nugget and then I’ll find other people who are better than me to help push it further,” Cliff said.

Although he wrote the code for the application, programing used to be very difficult for Cliff due to his dyslexia.

“I tried to learn how to program from the time I was in middle school. Every time I tried, I would fail because I would misspell variables and everything would break,” Cliff said. “I couldn’t even try to fix the CS bugs because I only had spelling bugs. I tried, tried, tried. It didn’t work.”

After arriving at Brown University, he created many products that were non-computer related, but kept realizing how much easier it would be to build tech products.

“I could just sit in the dining hall, have my computer, build my product on the spot, release it to the entire world on the spot, no need to have machine tools to produce prototypes or money for doing that. No need to do shipping, no need to find contract manufacturing, no need to get a bunch of money to do all of that. Everything could be so much faster to build something with software,” Cliff said.

Blaber described Cliff as always working incredibly hard to educate himself beyond what was required of him.

“He’s not a person who’s ever just going to be satisfied by doing the minimum of what’s asked of him,” Blaber said. “[A large part of his identity] is constructed around a sense of pride of work that is really deeply ingrained in his character. He wants to do excellent work. He wants to do as well as he possibly can.”

Erix Weitzman, Cliff’s youngest brother, who is a freshman at Redwood, emphasized Cliff’s optimistic demeanor and desire to improve the world.

“He’s always been positive with everything. He’s always smiling,” Erix said. “He’s always trying to find new productive things to do and accomplish. He’s not just in it to make money or become successful—I know it sounds cheesy—but [he’s more into] making the world a better place and improve everyone’s quality of life.”

Since the summer before his freshman year of college, Cliff has been attending hackathons, 24 to 48 hour competitions where people who enjoy building products, typically programs, get together and invent. At a hackathon, participants usually break up into groups of four.

“I would jump onto a table and tell everyone what I wanted to make and then recruit a team of people who were interested in the same thing. Then I’d kind of lead the team and design what the interface would look like and what the user experience would look like and kind of break up the tasks and figure out for people what portion of it they were going to work on,” Cliff said. “Then I’d put together the pitch and present and we usually won because we had someone who actually cared about how the presentation went.”

He participated in eight hackathons without knowing how to code, instead often leading his group members, before he decided he needed to learn to code.

“It was very hard for me in the beginning and I basically sat on the TA’s lap and asked them for a lot of help,” he said.

After some time, he improved and later became highly skilled at coding.

In addition to practice, the development of “spellcheck” in the software application for writing code greatly helped him to advance his skills.

“My lasting impression of him [his junior] year was just very, very impressed with his work ethic,” Blaber said. “He just out hustled everybody in the room. I don’t like sports analogies, but if this were a sports analogy, every time there was a loose ball, Cliff was the guy diving onto the floor, into the stands to get the loose ball.”

In his senior year, he enrolled in the highest-level CS class at Brown. He scored extremely well on his final and was invited to teach CS at a two-year alternative college program, where the students had deferred from universities like Harvard and Massachusetts Institute of Technology to attend, according to Cliff.

“So [I] started off very much not able to code and [then] started getting really, really good at it and greatly just because I was very, very motivated to learn,” he said.

However, Cliff’s perseverance is just one of his qualities that stand out to Blaber.

“He’s always came across to me as not just a very talented person, but also a very authentic person and I really like that about him,” Blaber said. “So he’s going to succeed, but he’s also somebody, that if you know him, you’ll be happy to see him succeed because you like him. He’s not somebody you would ever begrudge his success.”