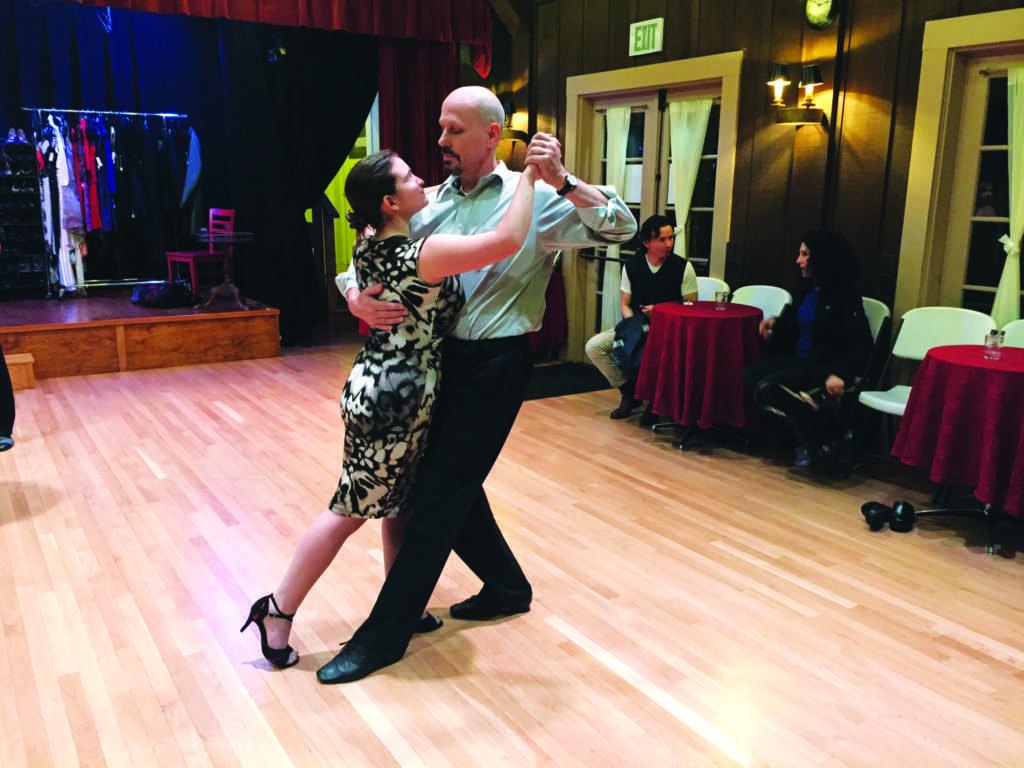 SOPHOMORE MADSEN SPARLER presents the Argentine tango with her partner. Sparler dances in a class of adults older than her by at least thirty years.

Despite the lively beat of the music and the increasingly intricate steps, sophomore Madsen Sparler is calm. Her feet tap and slide on the floor in perfect rhythm with her partner as they follow the instructors’ lead in the center of the studio. Other pairs spin around them in a colorful whirl of movement as the class practices the Argentine tango.

Sparler has taken tango classes at Alma del Tango, a studio in San Anselmo, for over a year. She is already in Tango 4, the highest level at the studio.

Sparler’s favorite part of learning the tango is the friendships she has found.

“I like the community of it, and the people there,” Sparler said.

Although most of the members of the tango class are over 50 years old, Sparler hasn’t had any trouble connecting with them, and she says she enjoys socializing with her fellow dancers.

Each tango class lasts three hours, which has led Sparler to adapt her social life to include the tango community, despite the age difference between her and the other dancers.

“It’s like having twenty parents who you only see three days a week,” Sparler said.

Even though she is at ease in a class full of adults, she believes that other teenagers may not be as comfortable.

One of Sparler’s tango instructors at Alma del Tango is Debbie Goodwin, a dance teacher who has been involved in Argentine tango for 20 years. According to Goodwin, Sparler fits in well with the older dancers, and is a positive person who is a welcome addition to the class.

“She connects with adults really well in general, and I think that’s just part of her personality,” Goodwin said. “It’s nice to have her involved.”

Sparler has also been involved in other types of dance in the past, such as ballroom and other styles of Latin dancing. However, she currently dedicates most of her time to tango.

She prefers the Argentine tango over the other styles of dance she has tried because of the freedom it allows through the improvisational style.

“[In other Latin dances] there are certain beats in which you have to step in a certain way, and so it’s more constrained,” Sparler said.

The Argentine tango gives each dancer flexibility in how they interpret the music, according to both Sparler and Goodwin.

“It’s free-form and variable. Some people do everything at a million miles an hour, and some people are more relaxed,” Sparler said.

According to Goodwin, the way someone customizes the tango is often an expression of their personality, whether that’s through larger arm gestures or more elaborate flourishes.

Goodwin added that dancing is a form of communication.

“When you dance with someone, you don’t even need to speak with them and already you can tell a lot about the person,” Goodwin said.

By taking multiple classes from Goodwin and her husband, John Campbell, and being involved in the tango community, Sparler has gained extensive knowledge about the dance style. Although the tango originated in Argentina, it has grown in popularity worldwide.

“I know people from Tokyo and Spain and Germany and the UK and [they all] do tango,” Sparler said.

Goodwin said that because so many tango teachers have gotten truly involved by traveling to Buenos Aires and studying the tango there, authentic Argentine tango can be found nearly anywhere.

“It’s popped up all over the world,” Goodwin said. “Any major city you go to, you can Google ‘Argentine tango’ and find classes and dances.”

Goodwin admits that the intimacy of the dance may take some getting used to for beginners, especially younger ones.

“In our culture [in the United States], it’s very difficult to get used to the closeness of the embrace, because already you’re chest to chest with a complete stranger,” Goodwin said.

However, Sparler said that it depends on a person’s comfort zone and that each dancer can choose how much of a connection they want to have.

“There are certain connections that you form when you touch someone, but if you don’t want to form that connection, and don’t want it to be super personal, it won’t be,” Sparler said.

All of the nuances of the Argentine tango that define it, such as the intimacy and individuality, have come together to create a whole lifestyle.