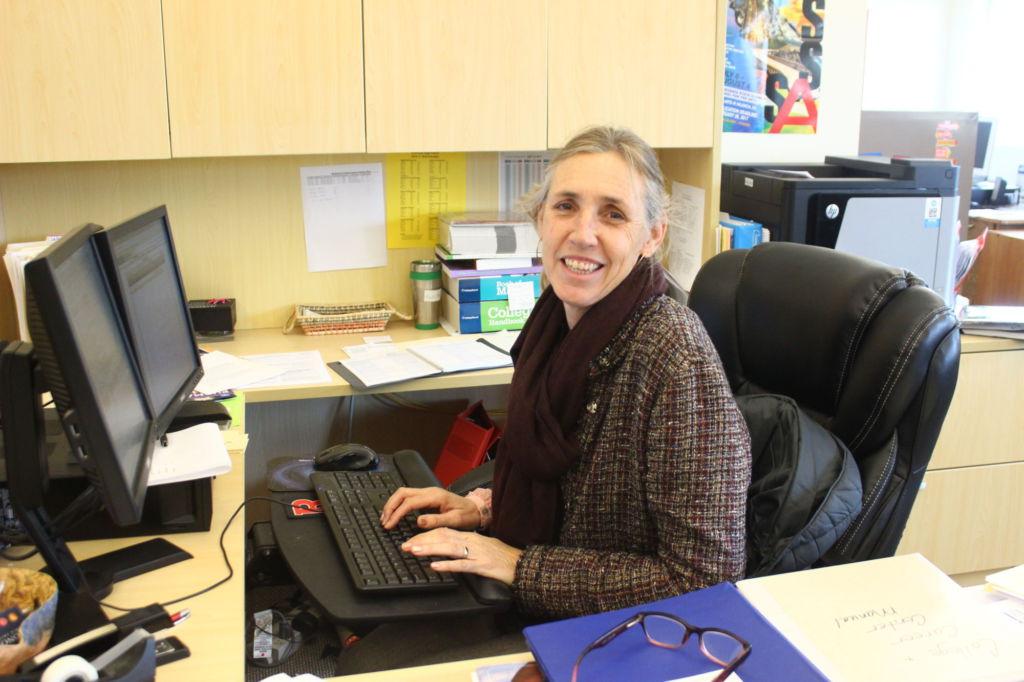 “She is very eager and enthusiastic,” Assistant Principal LaSandra White said. “We are excited to have her. [It] seems like she’s picked up right where Paula left off in working with counselors and students.”

Heimbrodt previously worked as a registrar at White Hill Middle School in Fairfax. This is her first time working at a high school.

Heimbrodt said she was not looking for a job when she accidentally stumbled upon the job posting, although she has been interested in being a college and career specialist for a long time.

“I knew this was the job I’d always wanted and so I just went for it,” she said.

Part of what Heimbrodt enjoys about this role is helping students by influencing the decisions they make. She believes that decisions made during the high school years are critical for a child’s future.

“I’m really passionate about helping kids, particularly [at] this age because it’s such an important stage in their lives,” Heimbrodt said.

Heimbrodt believes that conversing with students often helps them to recognize the schools and careers that interest them.

“I think the most important thing is to listen [to students] because―it’s amazing even at the young age [of] Redwood students―they have a pretty clear inner voice. If you listen, you can help them,” Heimbrodt said.

She  believes that her approach helps students define what they are thinking.

“Then they can channel that into actions steps,” she said.

As a San Anselmo resident, Heimbrodt is very familiar with Redwood and already knows quite a few students. She has five children of her own between the ages of 12 and 24, so she has been through the high school transition process as a parent. In working with her own children, Heimbrodt has come to believe in having a flexible mindset.

“There is a school for everyone,” she said. “Be willing to have an open mind and look at all of your options, and don’t let [the process] feel overwhelming or scary.”

Heimbrodt explained that students may think they are sure of what they want, but that may change dramatically by the end of senior year.

“There’s a lot of pressure that students put on themselves,” Heimbrodt said. “And for a good amount of people, there’s this perception that there are only a certain number of schools that are the ‘it’ schools.”

She added that there are many excellent schools that seniors may not have considered.

Heimbrodt said that she is most excited about meeting with students, helping them determine their college and career goals and developing the process to achieve those goals.

After students sort out their preferences, Heimbrodt explained, she will assist college-bound students in working through the college application and financial aid process.

Heimbrodt spent around three days with Vantrease in a “crash course” to transition into her new role.

However, others think she is doing well even in the short time she has been at Redwood.

“It seems like it’s a pretty seamless transition,” White said. “Obviously there’s a lot to learn, but I think she’s doing a really good job.”

Heimbrodt doesn’t anticipate making any changes to the College and Career Center. She recognizes that Vantrease’s systems have been in place for a long time and appear to be working well.

Although Heimbrodt has been in her new role less than three weeks, she has already worked with seniors on their college applications, school transcripts and other college admissions-related issues. She is also starting to see sophomores and juniors trickle in to make appointments with her.

“She’s really nice [and] we get along really well,” Martin said.

The biggest difference, Heimbrodt noted, between her role at Redwood and her previous role at White Hill Middle School is that it’s much quieter at Redwood. She saw many kids each day in her previous job and is looking forward to the opportunity to spend time individually with kids at Redwood.