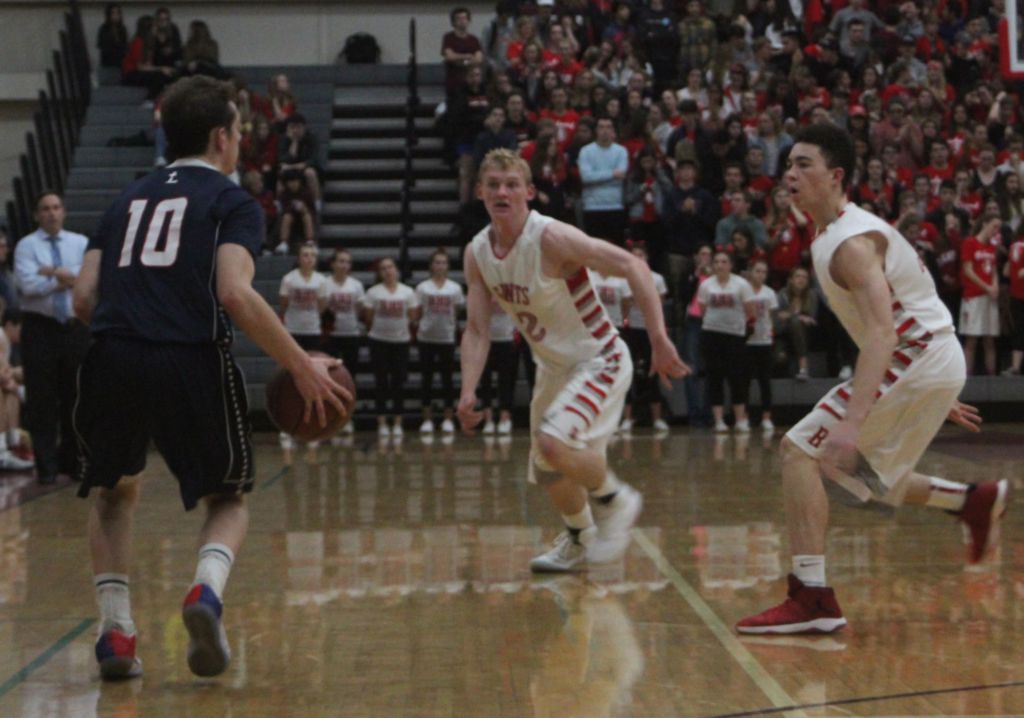 By: Josh Cohen and Adam Kreitzman

Long before tip-off, the stands filled on each and every side of the gymnasium as students poured in, some to watch basketball, some for the free t-shirt, and others to enjoy the social aspect of the oft-attended game night. As a sea of red engulfed the student section, the boys’ varsity basketball team knew it could not stand to disappoint. Though its opponent, Justin-Siena, was entering the game just 1-7 in league play, Redwood was hoping to bounce back from a disorienting defeat at the hands of rival Marin Catholic.

The most well-attended basketball game of the season was the least entertaining from a basketball standpoint, and maybe that’s why the stands were barren by time the game reached the fourth quarter, with Redwood pushing its lead to over twenty points before the reserves subbed in.

The final scoreboard read 68-37 in favor of the Giants, but it was a strong second half which propelled Redwood to victory.

“It’s important for us to come out and play as hard as we can no matter who it is we are playing,” said senior Alex Wilson, a key frontcourt starter.

Though the Giants’ offense was prolific on Friday night, ultimately its defense, which ranks second in MCAL in points per game, denied the Justin-Siena Braves any chance of remaining close.

“Scoring off of defense has been our motto for the whole year, and that’s how we broke open the score in the third quarter,” said sophomore Chance Farrell-Martin, starting guard for the Giants.

Farrell-Martin’s partner in the backcourt, Miles Squiers, also a sophomore, agreed that they feed off of each other’s energy by connecting passes and getting their team on a run.

“You could see [Justin Siena] got more tired in the third quarter than they were in the whole game because we started to push the ball and play aggressive defense.”

With the win, the Giants vaulted to 6-3 in MCAL, placing them in a three-way tie for fourth place, and just one game behind the three teams tied for first. With a five-game slate that includes key matchups at Branson and Tam, the Giants are surely going to have to pull out a few tough victories if they want any chance of earning the top spot in MCAL.

Friday Night’s Novel:
1st Quarter: The night started out slow for the Giants, who traded buckets early on with the Braves as the teams were tied at 10-10 midway through the first quarter. However, the Braves struggled mightily to crack Redwood’s full-court press, which caused a number of turnovers and led to many transition opportunities for the Giants, who eventually turned it around with three straight field goals, including a three-pointer from senior Brendan Shepard. The Braves would score a bucket of their own, before the quarter ended at 17-12.

2nd Quarter: The second quarter was relatively quiet for the Giants, as it only managed to outscore the Braves 14-10. It was Redwood’s defense which allowed it to build on its lead despite not playing up to its potential on offense. Head coach Steve Compagno was visibly frustrated on the sideline, as he knew halftime adjustments needed to be made despite ending the second quarter with a nine-point lead.

3rd Quarter: After a quiet first half, the Giants finally decided to hit the gas pedal in the third quarter. Completely energized, the Giants looked like they were in another form, as they played team basketball and pressured Justin-Siena ball handlers into committing numerous turnovers. They managed to put up a solid 21 points in the quarter, while holding the Braves to a mere six points. The third-quarter performance was the dagger, as there was no chance of any comeback. Most students flocked out of the stands during the quarter intermission, and the bleachers were barren for a somewhat meaningless fourth quarter. Nonetheless, Redwood found itself assured a victory after ramping up its intensity in the second half.

4th Quarter: Although the final quarter was irrelevant for the most part, it did provide a number of reserves the ability to see the court. They played well, extending Redwood’s lead from 24 to 31 by the end of the quarter. In the end, the scoreboard read 68-37, and the Redwood fans went home happy, even if it was before the fourth quarter.

Redwood’s leading scorer on the year, senior Chris Kress, committed two fouls in the first minute of the game. Early foul trouble plagued him for the rest of the game as he finished with just two points and one steal, easily short of his normal production.
Farrell-Martin had a season-high seven assists complemented by an above-average three steals. His swift assists and aggressive defense guided the Giants through their third quarter run.
Wilson, who started at the Giants’ high post position, was a key contributor to their half-court offense and tied his season-high nine points.
Averaging 11 points per game, Charlie Reis was vital to Redwood’s offense showing spurts of energy and driving to the basket with intent. He ended with 14 points while shooting 100% from the field.

The Giants hope to continue their persistent defense at Tam on Tuesday, Jan. 31.