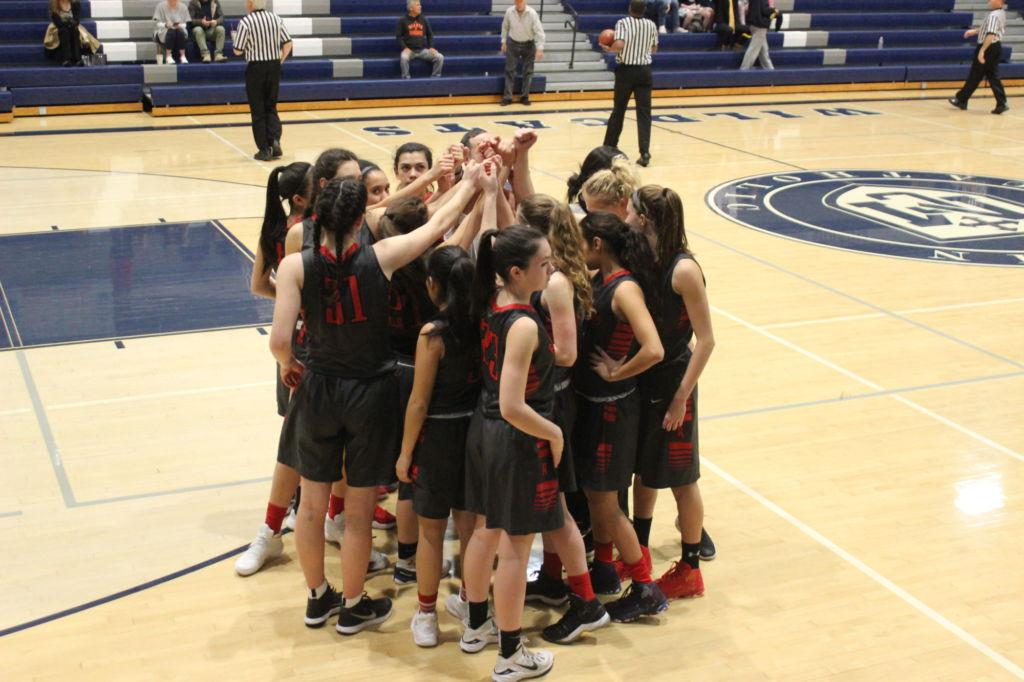 After trailing for the entire game, the Giants were brought within one point of their opponent by junior Zoe Stachowski. The score was 47-46 with a little more than a minute left in the final quarter. Stachowski stepped up to the line for a free throw after being fouled on her shot. Despite loud heckling from the Marin Catholic fans, she calmly set her eyes on the hoop.

Stachowski sank her free throw, tying the score and bringing herself one point closer to finishing as the highest scorer on her team with 19 points.

Unfortunately, despite Stachowski’s late-game heroics, the girls’ varsity basketball team was not able to prevail and lost to the Wildcats 52-47.

“They battled. They brought it back. But they didn’t finish, and it is something we are going to learn from and build from and get better at,” coach Diane Peterson said.

In the third quarter, the Giants began to hit their stride and make a comeback. At the close of the second half they had been losing 32-19. However, by mid-way through the third quarter, Marin Catholic’s lead had been diminished to only four points at 32-28.

“When we pulled it back within a few points in the third quarter, it was great watching them fight their way back. But, like we told them after the game, we don’t want to continue to have to be digging ourselves out of holes that we are in and trying to chip away at a lead. We want to be able to build a lead and maintain it,” Peterson said.

However, this is not the first time this season that the team has had to fight to catch up to an opponent.

“It’s been two games of making really great comebacks in the third quarter, but we need a find a way to—or we are going to find a way—to play all four quarters,” Peterson said.

A problem that Redwood struggled with throughout the game was rushing to execute plays and taking shots too quickly, according to Peterson.

“Any time we rush and try to shoot five seconds into the shot clock, we aren’t making the defense work. Something we’ve been trying to focus on and get better at is really maintaining our composure on offense and using the shot clock and getting the defense moving and working,” Peterson said.

The team was able to make its third quarter comeback only after addressing this issue.

“We passed it around a few times instead of ‘Oh shoot, the shot clock is winding down, let’s shoot in the first five seconds of the 30-second shot clock.’ We started to shoot more [with] 10 seconds left in the shot clock,” junior Julia Giusti said.

In preparing for the game against the Wildcats, the Giants focused on improving their own strengths and minimizing their weaknesses rather than zeroing in on a particularly strong player on the Marin Catholic team or their opponent’s set plays, according to senior Nicki Yang.

“Honestly, going into the game we are focused on playing our own basketball. When we play our best defense, there is not player we have to worry about,” Yang said.

The team will also be focused on diversifying their plays and strategies now that they are in the second half of the season, according to Peterson.

“Coming into the second half of the season, we are going to see teams [again]. We need to come back and be better prepared for other teams knowing from watching game film what we did last time. [We need to be] prepared to make the extra pass and execute in different ways,” Peterson said.

Most important, however, the team will continue to stay true to its own style and character, according to Peterson.

“We just need to continue building and working on the things we do well. It’s not about focusing on other teams, because we don’t want to play the other team’s game; we want to play our game,” Peterson said.

Their next game is at home on Jan. 27 at 6 p.m. against Justin Sienna.