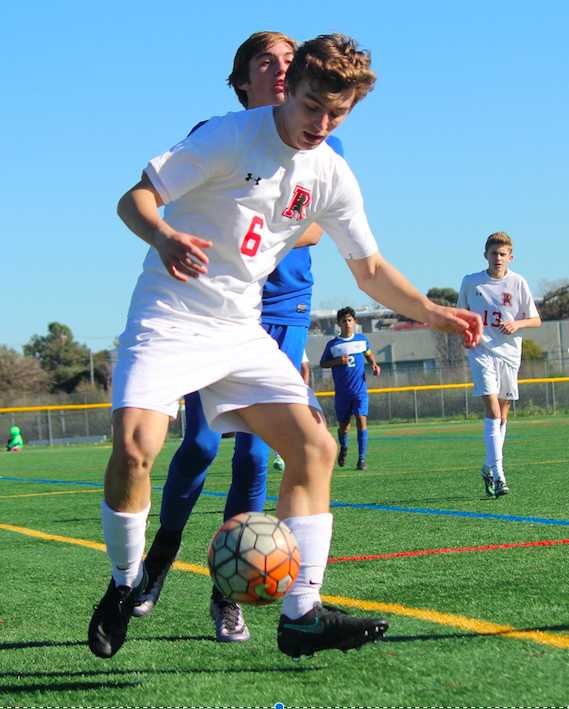 Sophomore Nathaniel Kuffner shields a defender as he controls the ball.

Junior Alejandro DeLeon found himself with the ball at his feet and an empty net with the goalie out of position. The game was deadlocked at zero with under two minutes remaining. The junior midfielder controlled the ball, shot and scored, giving the Giants a much-needed victory over Terra Linda by a score of 1-0 on Saturday, Dec. 17.

“Coming into the game we were a little worried because we were missing two of our best midfielders, Eamon [Rogan] and Aaron [Schten], but I think as a team we really got together and pulled out a win that was well-deserved,” said senior captain Jack Daffern.

It became clear early on that goals were not going to come easy. Both teams found themselves battle-tested early in the first half. There were limited scoring chances as both squads struggled to keep possession while in each other’s halves. It was not an offensively clean first half, but both teams did what they had to do to keep themselves in the game.

“As a defense it was the best game I’ve seen us play. We all stayed as a line and we moved together,” Daffern said. Junior center back Brian Diaz played lights out according to Daffern.

In the second half things started to open up for the Giants, as they started to find holes in and behind the Terra Linda defense.

“[Sophomore right back Colin Henderson] opened the game up a lot. He got himself wide and was able to play long balls through,” Daffern said.

Terra Linda managed to create chances of its own on quick counter attacks, but in the end the Trojans could not find the back of the net.

The Giants’ defense bent but did not break as sophomore goalkeeper Harri Hetrick came up with a few timely saves late in a shutout win that moved the Giants to 2-2 in league play this season, keeping them in the hunt for an MCAL title.

This was the Giants’ last game of the calendar year, as their next will take place at Novato High School on Jan. 3.