Advanced Performance Workshop goes out on a high note 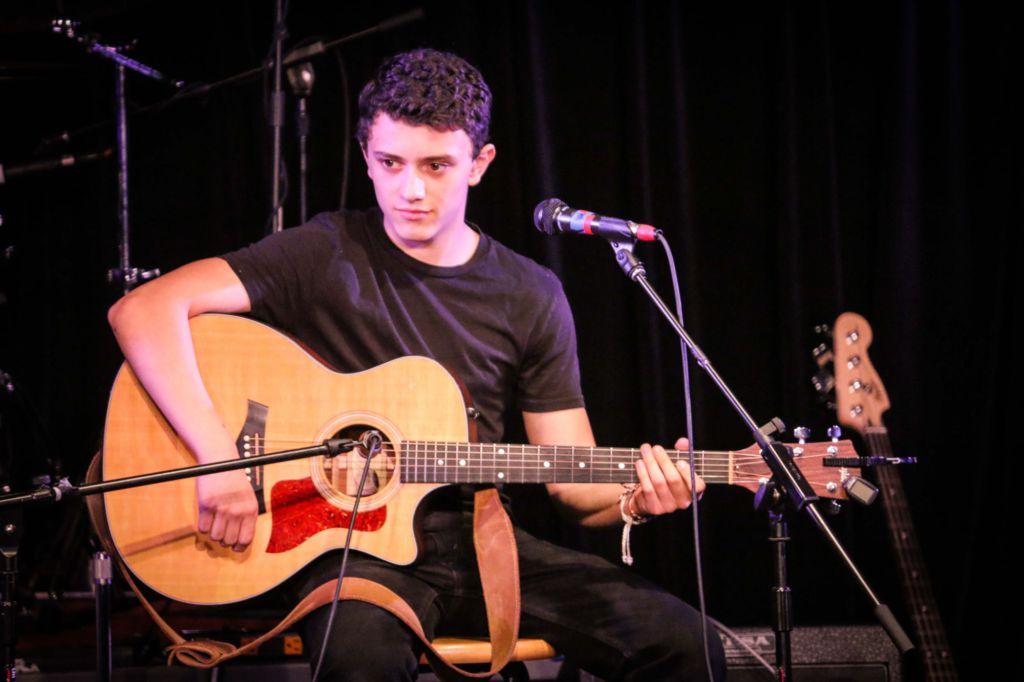 Guitar riffs, piano melodies and vocal harmonies, all thoughtfully produced by students in the Advanced Performance Workshop class, filled the Little Theater the evenings of Dec. 7 and Dec. 8.

The two-night concert provided students the opportunity to perform multiple original pieces, as well as covers in both solo and group performances. https://vimeo.com/195870112

Senior Noa Zimmerman, who is a guitarist, bassist and vocalist in her third year of Advanced Performance Workshop, believed there was a different atmosphere compared to previous concerts she has performed in.

“The group of seniors that graduated last year were big leaders in the program and everyone really aspired to be like them. This semester I think everyone had more of an opportunity to show themselves more. We didn’t have [the seniors] be the obvious forefront so everyone was working more together, which I like,” Zimmerman said.

Zimmerman especially attributed the vocalists, who performed many complex pieces with intricate harmonies.

Junior Dani Nollenberger, a singer and pianist, described performing onstage as euphoric and unparalleled to anything else.

“It’s the best feeling in the world to me. The first song is kind of always the highest the moment because you’re like, ‘Okay here we go!’ and you just jump right into it,” Nollenberger said.

A successful concert requires months of preparation, according to junior Jane Burke, who is a singer and a pianist in the class.

“We call the songs for the concerts ‘projects,’ so when projects time comes around in September, you think of a song you want to play, and then you gather people of all different instruments to play that song with you,” she said.

Burke also mentioned that while the Advanced Performance Class is very structured, it is also very free-flowing, which allows students the flexibility to play a myriad of different pieces.

“Mr. Mattern has a big influence on us. He really likes 70’s rock and country rock. He gives a list at the beginning of the year of a bunch of songs that he recommends for us,” Burke said.

The majority of November was dedicated to in-class group practice. Most students perform an average of about five to eight different songs, according to Zimmerman.

“There’s a lot of coordination involved because every song has different groups, so if you want to get your song good you have to make sure everyone is making the time and being committed to it,” Zimmerman said.

Naturally, there were pre-show nerves prior to the concert. But, the community nature of the class seemed to help mediate some nervous energy, according to Zimmerman.

“It’s a really fun setting in terms of because it’s a really supportive community. Everyone is very complimentary towards each other,” she said.

According to Zimmerman, Advanced Performance Workshop teacher John Mattern is a significant driving force in the class.

“Mattern pushes us a lot and in a really good way. He encourages us to go to the next step, and not do what’s easy but to try and make us go beyond our comfort zone, which I think makes it a really good environment because everyone is trying out new things,” Zimmerman said.

The Advanced Performance Workshop class hosts concerts once every semester. The next concerts are set to be on May 23 and 24 at 7 p.m. in the Little Theater.