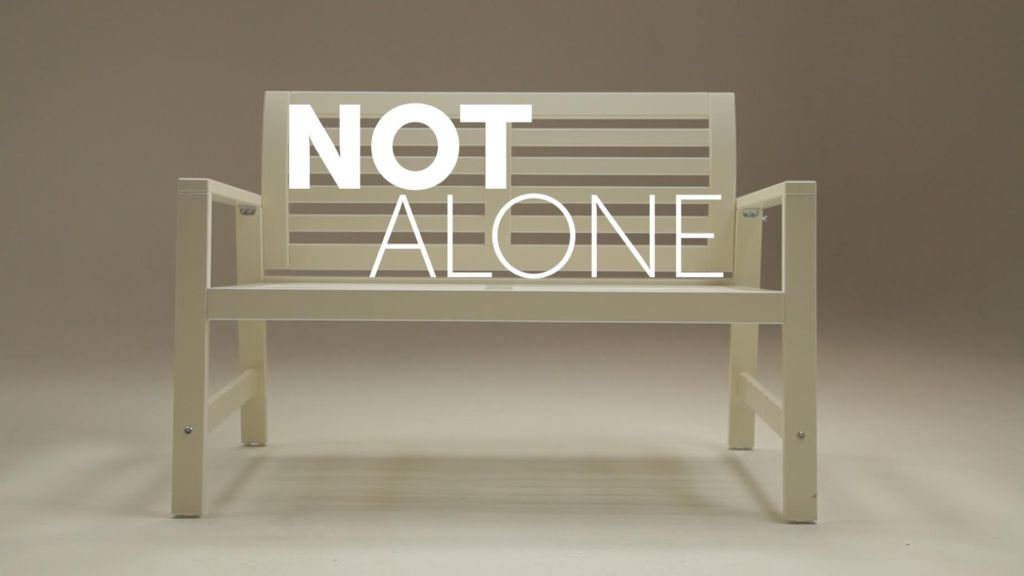 On a Wednesday in November,  Redwood students chattered excitedly, working on projects, filling out worksheets or writing essays.

Amid all this, however, one class fell silent. In room 521, the fifth period students of Ms. Maxwell’s AP Photography class and Mr. Hirsch’s Psychology class sat captivated by a film rolling from a projector at the front of the room. The mood was somber as they listened to firsthand accounts of depression from teens, many who lived in the Bay Area.

On Nov. 16, “Not Alone,” an independent documentary about teen suicide and depression in the Bay Area, was screened for the first time to Redwood students.

The film featured students from local schools and was co-directed by Kiki Goshay, the mother of a Redwood alumnus, and St. Ignatius student Jacqueline Monetta.

“It was definitely a learning experience and it’s the type of film that makes you surprised, that makes you sad. It takes some time to let the stuff that you just watched marinate and really it takes a little time to let you think about it,” said Monetta, who watched the screening via Skype from her current residence in Italy. “We had some great feedback from a lot of the students. Some talked to the counselors after and some came and wrote us notes and some came and talked to Kiki.”

The film touched on how depression is actually common in the Bay Area. In an interview format, the film consisted of Monetta talking to several students from schools all around Marin County about their experiences with depression, self harm and suicide.

Although many students at the screening didn’t recognize the people being interviewed, seeing familiar faces in the B-roll of schools around Marin seemed to create a deeper connection to the film.

“Even though it was just people in the background and even though I didn’t know the people, there were still familiar faces. I thought that it was especially relatable because it was in the Bay Area specifically,” said junior Timila Clark-Shrestha. “I recognized some people in the film, so that was helpful to see that it was happening in my community.”

This relatability was part of Monetta and Goshay’s goal with the film: to make talking about depression and suicide less taboo by showing how depression is very common.

“The goal of the movie is to spark conversation amongst teens in mental health and to help other teens realize that they are not alone,” Monetta said.

When making the film, the pair found that there was a stigma attached to being depressed or anxious.

“ [Having depression is] not so unusual. There isn’t something inherently wrong or weird about you if you’re feeling depression or anxiety,” Goshay said. “They’re just conditions and sometimes they come and go. Some people have to work on some things forever. Some people are going to be constantly working on their mental health.”

Many students who saw the screening reported afterward that they felt that depression was a common problem in the Bay Area.

“I’ve learned that depression can come in a bunch of different ways,” said senior Cameron Breck. “It’s not a black and white thing— there’s a lot of grey.”

The film, which featured work from past AP Photo classes at Redwood, took more than a year to make. Monetta first approached Goshay, a complete stranger, with her idea, knowing that Goshay had worked as a filmmaker before on other projects that included a documentary.

“I didn’t know her at all. When I first had the idea of making the film, I really just reached out to everyone I knew,” Monetta said, “Kiki actually lives a couple streets up from me in Kentfield so I drove up one day, knowing she did all of these films before, and we ended up talking for three hours about the film and about the topic and she jumped on board and the rest is history.”

Production was difficult because before meeting Goshay, Monetta found it hard to get people to take her seriously as a young teen wanting to make a movie.

“I think the other part was being taken seriously in this film process. Once I met Kiki it was a lot easier, but when I first got involved in making the film it was really difficult to get people to want to invest in a teen-made film,” Monetta said.

Another difficult part of production was the editing stage. There were more than 24 hours of interview footage and Goshay, Monetta, and film editor Laurel Ladevich had to sort  through all of the footage and work together to create a story structure.

“Finding a structure in documentaries is much harder than finding structure in dramatic material because you don’t have a script that you’re starting out with. Jacqueline and Kiki worked together to make good questions for the teens and afterward the editor is key to shaping the material and the arc,” Ladevich said.

Another goal of the film was to spark discussion and raise awareness about the signs of suicide and depression, so that teens can know what to do when their friends are exhibiting these signs.

“I’ll use the things I learned in the video. It will probably come in handy when I have friends seeking help,” said senior Aranza Berruecos. “I know they showed in the video signals that you can use when someone has depression. By looking at that I now know how to help my friends.”

Through all of the hard work and effort put into the film, Monetta and Goshay just want to see a conversation started on the topic, and they want teens to learn how to help themselves or their friends.

“If even just one student helps save their friend from harming themself, this will all be worth it,” Goshay said.