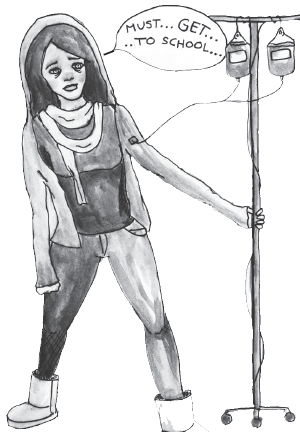 As winter approaches, the sounds of coughs, sniffs, and sneezes are beginning to fill Redwood’s classrooms. While students often cannot take a week off from school just to nurse a common cold, the complete lack of sanitary precautions often exhibited by sick students only perpetuates the spread of colds.

As much as I try to empathize with my coughing classmates, my sympathy vanishes when those coughs land on me. Likewise, while I appreciate the valiant efforts of those who stick their hands in front of their mouths while coughing, they are merely ensuring that their germs will spread as soon as they touch another object.

The same goes for sneezing – I have been trying to strengthen my immune system, but I can only do so much when particles of mucus are landing directly on me, or hovering in the air around my nose and mouth.

And do I really want to lend you my pencil after you just shot about a thousand milligrams of snot into your bare hand? No. Will I give it to you anyway to be nice? Yes. I’ll just have to slather my hands with hand sanitizer while you waltz off to sharpen the pencil I’ll be letting you keep.

Nor do I want to share my water bottle with you. I know you’re so weak from your cold that you can’t walk five steps to a water fountain, but I promise the strenuous exercise won’t hurt too much. And no, you can’t have a sip even if you waterfall – I don’t want the germs of your cold, mono, oral herpes, or whatever other diseases that are lingering in your mouth, that close to my water bottle.

The sound of constant sniffling is a common pet peeve, even among the non-germaphobic. We all know the feeling: you’re sitting in a silent classroom, trying to focus on the essay you’re writing, but the kid sitting two desks down from you is sniffing repetitively, as if following the beat of a metronome.

Then comes the inevitable sweatshirt wipe. There is often a tissue box almost within reach, and I don’t know why anyone would rather have snot on their clothes than just blow their nose.

So thanks for interrupting my train of thought with your sniffling symphony – you just singlehandedly lowered my timed write grade by a solid 10 percent.

Almost as aggravating as the unsanitary students are the ones who claim they “aren’t contagious” because they’re on some form of antibiotics or other. According to Centers for Disease Control and Prevention, antibiotics do not cure viral infections (such as colds) and do not make these infections less contagious. So no longer can you claim that I am “overreacting” by avoiding you – the scientific community has my back on this one.

Even the best of us get hit with colds from time to time, but we could all benefit if sick students would keep their germs to themselves. Instead of whining about how often you get sick, take a vitamin C, get some sleep, eat well, and hope for the best. And maybe if you stop coughing on me, the health karma gods might answer your prayers.