One million steps and counting 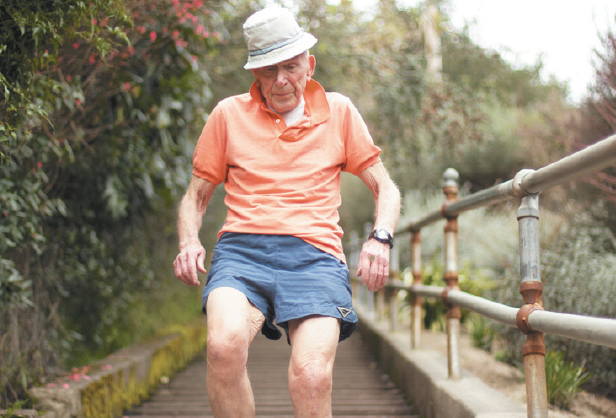 Zvi Danenberg climbs up the Larkspur stairs as a part of his daily routine, sporting his trademarked “crooked hat.”

On Magnolia Avenue, the Larkspur stairs loom large, and climbing the 139 steps to the top may seem like a daunting task. But at 86 years-old, Larkspur resident Zvi Danenberg climbed the steps 21 and a half times every morning in 2011.

Danenberg climbed a total of 3,001 stairs per day and over a million and a half stairs over the course of the year.

Danenberg has been climbing these stairs, also known as the Arch Street Steps, since 2007. He had to have a knee replacement in April of that year, and began climbing the Larkspur stairs as part of his recovery. He said his true dedication started at the end of 2007.

Danenberg said that he climbs the stairs two at a time while holding onto the railing.

“I have to hold onto the railing because I don’t have the balance I used to have,” he said.

On Dec. 17, the Lark Theater showed a half-hour long documentary, titled The Runner with the Crooked Hat, about Danenberg and his love of the stairs.

Danenberg said that the movie’s producers were only able to get clearance for one showing because of complications involving the background music, but that the showing at the Lark went well.

“People really enjoyed it,” Danenberg said. “They have to get a clearance to work out [future showings]. They haven’t gotten around to it yet, but hopefully they will.”

The movie’s trailer can be viewed online by searching for “The Runner with the Crooked Hat.”

The movie’s title stemmed from Danenberg’s nickname, which he had earned long before he started climbing stairs.

“I used to be a runner, big time,” he said. “It’s not for nothing that students at Redwood High School dubbed me the runner with the crooked hat.”

Danenberg said he had been sedentary until retiring at age 60 with lower back problems. He said his doctor told him to walk to relieve the pain.

“I used to walk hours on end,” Danenberg said. “I would see people that run and I would say to myself, ‘What’s the matter with these crazy people, don’t they have anything better to do than waste their time on running?’ Then one morning, I don’t know what happened to me, I ran 100 yards with improper shoes, and I fell in love with it. The next day I ran four miles, and the rest is history. In a little over 20 years, I ran 74,000 miles.”

According to Danenberg, in his 60s, 70s, and early 80s, he ran eight miles every morning and an additional eight miles in the afternoon four or five times a week, which was what ultimately led to his needing a knee replacement.

Danenberg grew up in Israel and attended American International College in Massachusetts from 1946 to 1948. After serving in Israel’s navy for two years, he went to UC Berkeley in 1950.

“That’s where I met my wife,” Danenberg said. “We got married in 1953 and we’ve been married since then. We have three daughters and all of them went to Redwood.”

Danenberg taught science at high schools in San Francisco before retiring in 1985. He is also a classical music enthusiast, and currently has a collection of over 26,000 LP records and CDs.

Danenberg said his only goal for 2012 is to continue what he’s doing.

“People talk to me and they say, ‘How about two million?’ And they have no idea what’s involved in doing a million and a half, even in a million,” he said. “If I had to do two million, I’d practically have to live at these stairs, and I don’t plan to.”

Danenberg said that his life changed after his retirement.