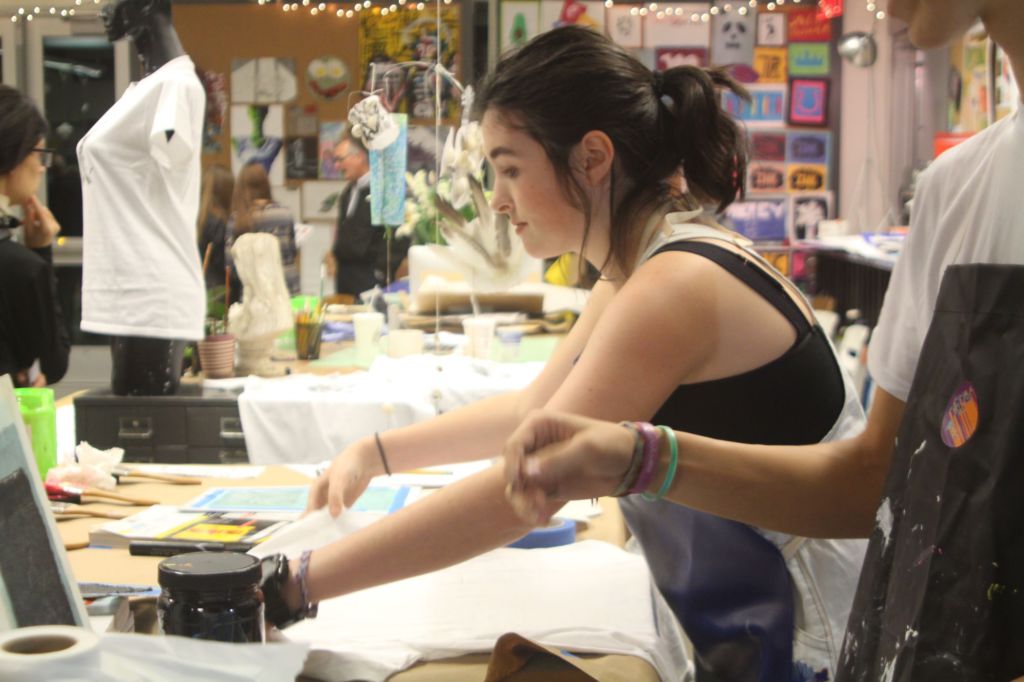 The AV students, who specialize in drawing and painting, worked in conjunction with outside artists from other mediums to display their work through an exhibition, a dance performance, poetry readings and art activities.

According to AV teacher Lauren Bartone, the event aimed to draw attention from the outside community to the arts in addition to displaying the work of the students.

“It’s really important to make sure that [the student’s] voice is heard,” Bartone said.  “Students may get up and leave their art class and go to their math class, or PE class, and nobody there knows what they just did, what they just made and what they’re capable of unless they have an audience for their art.”

The AV class meets once a week at night and is open to all students, whether or not they are concurrently enrolled in an art elective during the day. According to Bartone, many students take the class just to use the time as an open studio or to gain exposure to the art community through various guest artists that teach each week.

“I don’t take art inside of school– I don’t have room in my schedule for it, so that’s why I like the night class,” said junior Talia Klein.  “I have time at night to actually do art, so it works really well.”

While the AV class is specialized for drawing and painting students, the event featured performances from the Dance Focus class as well as a poetry reading from senior Eric Putterman.

“We have the display boards in the hallways to show work, but there’s a lot of work that is awesome and made at Redwood that nobody sees, so my plan was to get a little bit more crossover going on between other disciplines and other kinds of art,” Bartone said.

The class hosts an event at the end of each semester, making this the third consecutive showcase. According to Bartone and Klein, small adjustments such as the location made this the most successful exhibition yet.

In addition to displaying their artwork on the walls, the students fundraised by selling totebags and t-shirts that they screen printed on the spot with their own designs.

“It just shows the art that people have been working on for so long and trying to make and putting all of this time into,” Klein said. “It’s making people feel like their art is being noticed.”