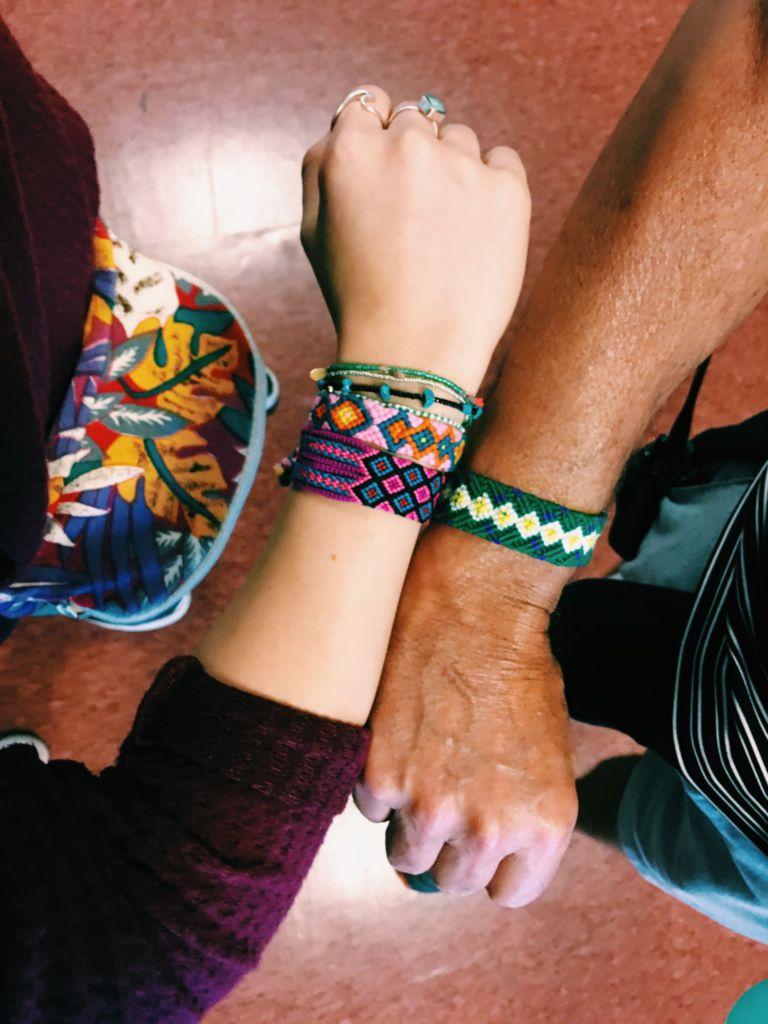 Made by artists in Nicaragua and Guatemala, the bracelets sold out within just a few days.

Hundreds of students filled Redwood’s halls with color during the weeks of Nov. 7 and 14, sporting the handmade bracelets sold by Redwood’s recently-formed Color the World club. The bracelets, called “pulseras,” were sold as part of the Pulsera Project, which is put on by the nonprofit organization Color the World and aims to support Nicaraguan and Guatemalan artists and their communities.

The student group sold over 500 pulseras and several purses, raising over $3000. The sales took place at lunch on the Mosaic Stage and before school by the front parking lot on Nov. 14 and 15. According to senior Sydney Abrams, a club member, students started asking about the bracelets as soon as the club received them, so they began selling bracelets the week before the official sale began.

“We sold so many [bracelets] in the first 24 hours that we basically did not have enough to do a full sale during the official sale week. They only lasted Monday and then Tuesday morning,” Abrams said.

Every pulsera comes with the picture of the artist who made it and schools that participate in the project receive educational material that is available to teachers.

The inspiration to participate in the Pulsera Project came from Spanish teacher Todd Van Peursem, who has shown a short video about the project to his classes for the past few years. A group of students took initiative this year and decided to get involved with the organization.

The money raised by the Pulsera Project goes towards paying the artists’ wages and funding community projects like housing development, health care, and scholarships for the artists to attend school.

“This allows for a glimpse of hope for upward social mobility,” Van Peursem said. “You get to work your own hours, with flexible schedules, doing something that you’re familiar with and you love, and you get to share that with the world.”

According to Colin Crane, cofounder of the Pulsera Project, the bracelets are bought from the artists at around twice the market value.

“The artists we work with are making a true ‘living wage’ and not just getting by day to day, which is an unfortunate reality for many artisans in the developing world,” Crane wrote in an email interview.

Van Peursem said what first attracted him to the organization was that it’s youth-driven, cross-cultural, and inspiring for students.

“It gives back to those who are purchasing—you’re not stealing, you’re not ripping anyone off—you’re sharing colorful artwork and that money has now created a sustainable economy and the ability for growth,” Van Peursem said.

In addition, he hopes students will appreciate the business model upon which the organization is run.

“It’s about love, it’s about respect, [and] it’s about giving back,” Van Peursem said. “That is how, in 2016 and moving forward, we are going to start developing developing nations. I want students to look at this model and say, ‘Wow, that is something that we could do anywhere.’”

Both Van Peursem and Abrams said that they received a lot of positive feedback from the Redwood community.

“We expected that [the Pulsera Project] would be really big, but I don’t think we expected that we would completely sell out. We thought at the end we’d have to be like, ‘Come on everyone, buy our stuff,’ but it was so fast; we did not realize how powerful Redwood was,” Abrams said.

According to Van Peursem, the club hopes to establish the Pulsera Project or a similar undertaking as an annual event, and possibly move the initiative into other schools in the district. By the end of the spring, the club may set up Skype calls with some of the artists, and is exploring the idea of hosting artists in Marin as a cultural exchange in future years.