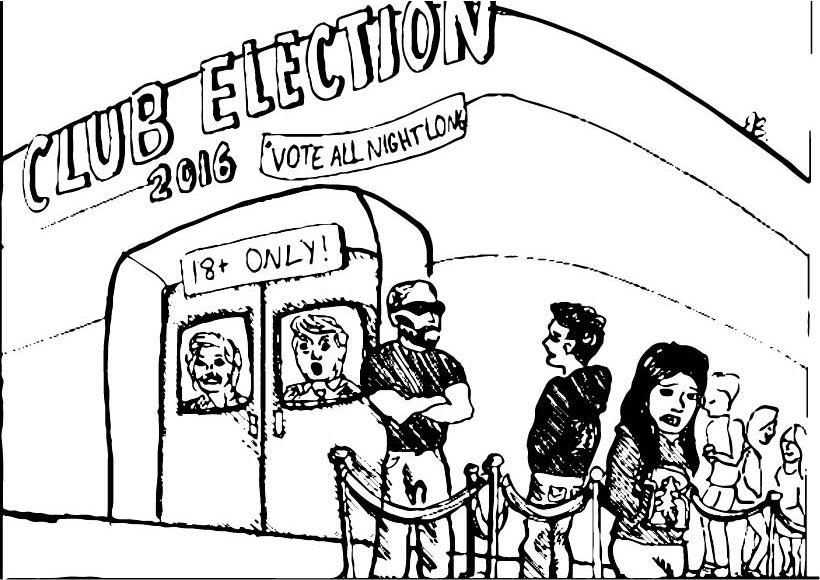 Let’s say there’s a club downtown that you’ve been dying to go to for years. It has a big, flashy entrance with bouncers in suits standing outside. In past years, it has had the best new performers. But thanks to their strict ID policy, you’ve never been able to get in. Let’s call it the 2016 Voting Club, and until you’re eighteen, despite your strongest wishes, you just can’t get inside.

So you watch jealously for years as your elders talk glowingly and patriotically about the club and the civic engagement that it represents. You desperately want to go inside, to check your boxes, stand in your very own booth and receive a sticker indicating that you were finally there! But unfortunately, you can do nothing but watch from the sidewalk as people around you excitedly discuss the happenings of the club.

Finally, though, your time has come, and on your 18th birthday, you grab some friends, call an Uber and head to the city. You pregame on the way there (by reading up on some of the state propositions, of course) and before you know it, you are standing in front of the club. There are millennials and senior citizens pouring out of the doors with smiles on their faces and stickers on their shirts.

Nervously, you approach the front door. The bouncers check your ID, and after years of wondering about what the club was like, the moment has arrived. You walk inside with the legacies of millions of Americans who had entered those doors before you on your shoulders, expecting a whole new world of red, white and blue, majestic eagles and fireworks.

But it doesn’t take long for you to realize that the glitz and glamor of the club was nothing but a façade. After all, this is the 2016 presidential election. Inside, the walls and floors are dirty. TVs blare debates full of hateful rhetoric and undignified behavior, a cacophony of interruptions and insults. Media outlets compete to see who can deliver the most biased and sensationalized coverage. And a trip to the restroom reveals a wall covered in Donald Trump’s tweets, as if a bathroom isn’t dirty enough.

Your first trip to the Club was the ultimate letdown. Your expectations were crushed and so was your patriotism. After an experience like this, why would you want to go back to the club?

What does this mean for the future of American politics? The lasting legacy of this election remains to be seen, and it may be another four years until we can truly gauge the figurative damage done to the American political system and to Millennial voters.

But there’s no denying that the absurdity of this election has affected the way the Millennial generation will view politics, whether it’s because of the behavior of the two candidates, the failures of media coverage or the outlandish rhetoric instead of grounded policy.

Many Millennials, the most impressionable of voters, were most likely disillusioned by what they saw this election cycle, regardless of their political views. This was because there wasn’t a problem with just one side of the spectrum, but a problem with the system in general, from the primaries down to Election Day two weeks ago. I hope that in four years, my peers will be excited for the election and for the opportunity to vote, as they should be. After all, elections should be inspiring times, a chance for people of all different backgrounds to do their part in deciding what the future of their country will look like.

But this 2016 election is the opposite—where people aren’t voting for a candidate they are proud to represent, but instead one who they see as a lesser of two evils. And that’s assuming that people are even voting.

It is important to remember that this election’s Voting Club is not the norm, but an anomaly. If you look down the street, there’s another club being built. It holds the promise of an election with legitimate candidates, unbiased media and a focus on policy.

When 2020 comes around, I can only hope that people go clubbing instead of staying home.