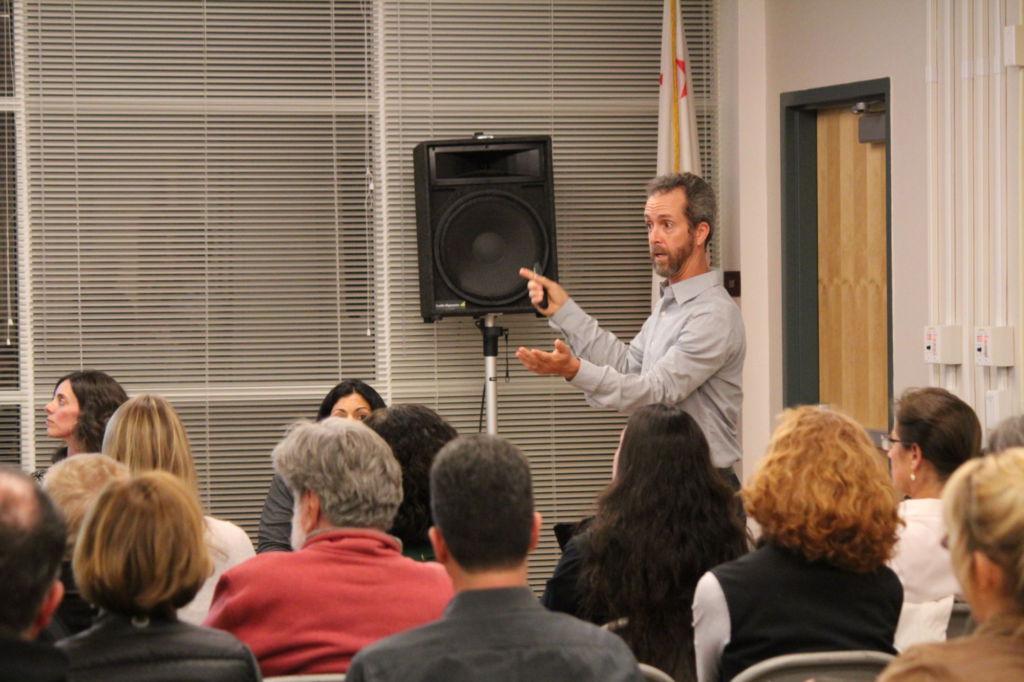 Presenting the Next Generation Science Standards to community members at the discussion, Science Task Force member Joe Stewart explains the features of the standards.

The Redwood Science Task Force, a group of administration and science faculty, presented the Next Generation Science Standards (NGSS) on Wednesday, Oct. 26 in a community forum at the Kreps Conference Room.

California public school districts are currently implementing NGSS and the Tamalpais Union High School District is in the beginning phase of development and discussion.

The standards, written by educators from 26 states including California, were finalized in April 2013 and adopted by California later that year. The implementation process has been gradual, with pilot schools’ slow expansion. Redwood will integrate the standards into its curriculum beginning this year.

NGSS emphasize learning through first-hand investigation, developing relevant science skills and linking together content from different science disciplines into cohesive knowledge, according to a press release.

“NGSS focuses much more on doing science with real world application as opposed to only memorizing content. More than anything, the standards will create that shift,” environmental science teacher Joe Stewart explained at the discussion, referring to the NGSS emphasis on performance expectations.

Aneesha Badrinarayan, Senior Associate on the Science Team at Achieve, a nonprofit organization that contributes to the development and implementation of the standards, said that she believes they help students gain conceptual skills and knowledge that will prepare them for the real world rather than memorize discrete facts.

The standards are structured around an idea called “Three Dimensional Learning.” They divide learning into three dimensions categorized as Science and Engineering Practices, Crosscutting Concepts and Core Disciplinary Ideas. Any lesson will include aspects from each of these categories.

“Our job as teachers will be to weave together instruction that will capture all three of the dimensions,” science department head Todd Samet said.

Many of the teachers in the Redwood Science Department are already utilizing tools detailed in the standards such as laboratory based learning and modeling, but NGSS will make the standards more explicit, according to Principal David Sondheim.

“This isn’t radically different,” Sondheim said. “These are strategies that will help all of our student. Whether they are headed into science or need to be scientifically informed citizens.”

Science teacher Marta DiDomizio said that she values the introduction of engineering practices and how the standards will require that teachers update their curriculum with technology. This will allow students to concentrate on investigating phenomena and learning skills relevant to the modernizing world.

Di Domizio described a lesson she currently teaches and how technology can be incorporated. Rather than graphing by hand, students can graph on computer programs.

“The shift is from width to depth and from memorization to application,” Di Domizio said. “I see a lot of modernization with content and with tools in these standards that was not there before.”

The Tam District has already had a strong focus on laboratory and experimental-based science and investigation, one of the elements that the standards emphasize, according to Samet. However, the science department looks to incorporate more of the other concepts such as data analysis and argumentation.

The Task Force is currently discussing possible changes to the required course sequence. The establishment of NGSS may potentially lead the department to restructure the two year Integrated Science sequence that TUHSD has had for 25 years, to be a three-year sequence that contains physical, earth and life sciences. Any class aligned with NGSS will be UC approved for lab credit, according to Di Domizio.

Redwood science teachers present at the discussion displayed full support of the standards.

This excitement has been displayed nationwide as well, according to Badrinarayan.