Changing demographics to affect the future of American politics 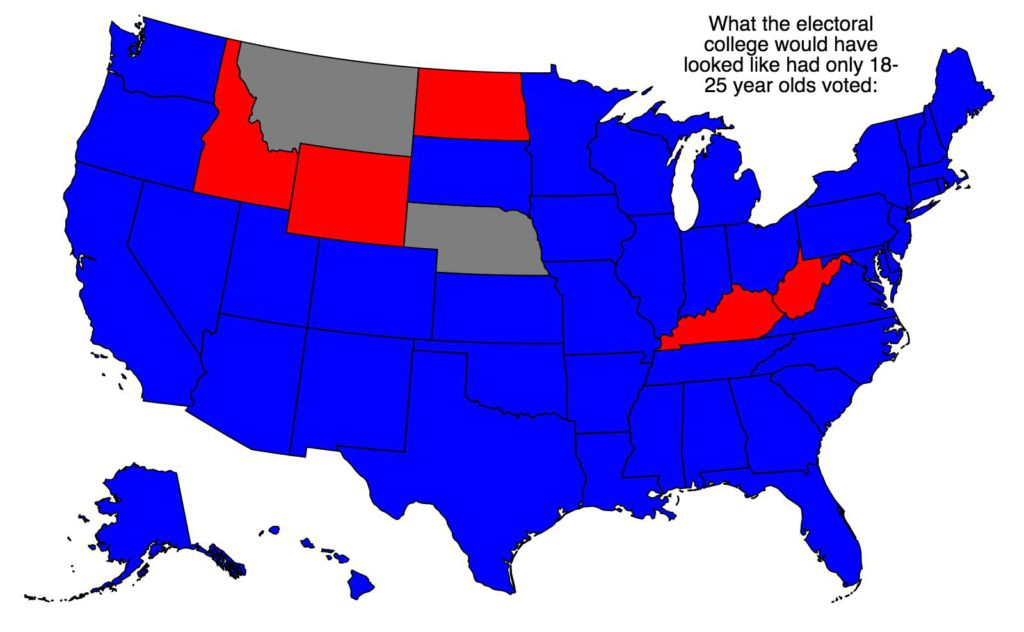 Although not all Redwood students voted in this year’s election, many of us tuned into the election with serious interest and understanding for perhaps the first time. What some of us might not know is just how large of an impact our generation is going to have on our nation’s politics in the future. With the number of Millennials (people born in between 1980 and 2000) who are part of the voting populace growing each day, just how much will it affect American politics?

Assuming neither party augments its platform, the growth of the population percentage of Millennials is most likely going to shift American politics towards the Democratic party. But what makes our generation of voters different from the rest?

It is no secret that every new generation of humans brings new ideals and beliefs. The Millennial generation has views that heavily differ from past generations. For one, about 50 percent of voting-age Millennials self-identify as politically independent. A closer look will show why the Democrats stand to gain the most from our generation of voters, barring a remarkable jump in relevance by a third party in the next few years. Considering this election featured the two most unfavorable candidates in the history of American politics, the fact that no third party was able to take advantage of the situation makes it highly unlikely that one will in the future.
In the 2012 presidential election, about 60 percent of voters between the ages of 18 and 29 cast a vote for President Obama, which is a significantly large percentage. That isn’t to say that 60 percent of Millennials will continue to vote Democrat, but by looking at self-reported beliefs of Millennials, it isn’t hard to imagine the trend continuing. Here are five reasons the Millennial generation will have a huge impact on American politics in the coming years:

In recent history, Republicans have typically performed much better among strongly religious populations, especially within southern “Bible Belt” states, such as Alabama, Arkansas, Georgia and Mississippi. Right now, 29 percent of Millennials do not affiliate with any religion, which is a much higher percentage than previous generations.
Furthermore, only 36 percent of Millennials view themselves as religious, compared to the 50-60 percent of the other three generations (Baby Boomer, Generation X, Silent). The Democrats will likely stand to gain from an increased secular population, as it has performed well among this demographic in previous elections.
Republicans, on the other hand, have performed exceedingly well among evangelical Christians, the most Republican-leaning demographic. With this group’s percentage of the voting populace shrinking, it’ll most likely hurt the Republican party.

Reason 2: Low trust in others

Considering a conservative government would rely on the economy to self-regulate, the inherent belief that other people are trustworthy is a major tenet for a free market with less government intervention.
Only 19 percent of Millennials believe that most people can be trusted, less than half that of the Baby Boomers (40 percent). With so few individuals from our generation believing that others can be trusted, a party that favors less government intervention and more trust in the economy to self-regulate will not do well among the Millennial demographic.

Reason 3: Millennials are on track to have the largest rate of higher education

Throughout this election cycle, as well as the prior ones, the Republican party has performed its best among whites without a college education. In fact, polls from ABC have shown Trump to have a greater than 50 percent advantage over Clinton in this demographic. On the flipside, and especially in Trump’s 2016 campaign, the Republicans have struggled to perform well among voters who have a college education. Polls taken throughout the election universally show a positive correlation between level of education and voting Clinton.
With nearly a third of older Millennials (ages 26-33) having earned a bachelor’s degree or higher, the amount of college-educated voters will rise. This change will not help the Republican party, who have yet to do well in this demographic.

Reason 4: Millennials have a favorable view of Obama

More so than any other generation, the Millennials have a favorable view of Obama in his time in office. Forty-nine percent of Millennials approve of Obama’s presidency, compared to 40 percent who disapprove, which is in stark contrast to the other three generations, all of which have higher disapproval ratings.
Additionally, there is a 50 percent favorability among the younger Millennials (ages 18-25), which means the voters who are coming of voting age are more likely to support the incumbent president as well as his party.

Reason 5: The Millennials are the most diverse group in the United States ever

The U.S. is going to continue to become more and more racially and ethnically diverse for the next 50 years, when Whites could theoretically no longer be a lone majority. As more racial and ethnic minorities become voter-eligible, it will be to the benefit of the Democrats, as this demographic seems to have coalesced around the liberal party whose immigration policies are more inclusive.
In the future we could see the population of foreign-born citizens grow from the already record-high figure of 14 percent in this election cycle. Additionally, the U.S.’s growing favorability towards immigration, largely fueled by Millennials (57 percent of Americans think racial and ethnic diversity makes the U.S. a better place to live whereas only 8 percent hold the opposite view), should lend a hand in policies more favorable to immigration in the future.
Even though the Republicans swept this election, it had much more to do with a strong dislike for Clinton than anything else. Our voting populace is shifting heavily liberal, and elections in the next decade will show that. This could be the Republican Party’s last stand.
**All data, unless otherwise noted, was provided by Pew Research**