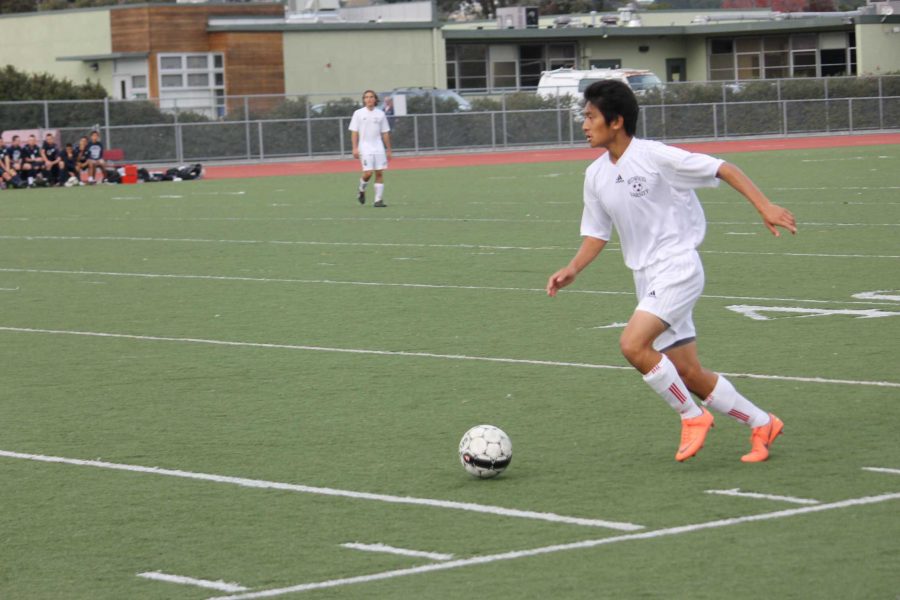 Junior Lucas Wong advances the ball in an NCS match against Marin Catholic. Wong was suspended earlier in the season after a violent collision with an MC player.

Sitting on the end of the bench during the MCAL semifinal match, junior Lucas Wong watched the ball as it was lofted in towards the goal. It entered a throng of leaping players before being redirected. As the ball hit the mesh netting behind Redwood goalie Will Finnie, Wong could only wonder if he could have made a difference.

On the other bench, Marin Catholic senior William Perry sat in street clothes as the ball was sent into the goal area. When he saw the ball land in the net, he erupted from his seat joyously to celebrate with his team.

Any game between Redwood and MC is hotly contested, any victory rewarding, but this game was different. The emotions were heightened.

Throughout the season, Wong and Perry each played key roles for their respective teams, cementing themselves as consistent starters. But they were both on the bench for the MCAL semifinal.

Almost two weeks prior, on Oct. 12, Perry was camped under the ball as it was high in the air, preparing to flick the ball forward with his head. Wong was about five yards away when he saw the ball heading towards Perry, according to Perry and several Redwood players on the field.

Wong sprinted full speed, as he always does, and leapt toward the ball. As Perry turned his head in an effort to redirect the ball, his open mouth collided with Wong’s black-haired head. A pool of blood quickly formed around the crumpled Perry as he lay on the ground, and Wong’s jet-black hair became stained red.

Perry was rushed to the hospital, where it was found that he had fractured the bone in his mouth that held in place his ten front upper teeth. Wong received a yellow card for the play, and was removed from the game because a flap of skin on his scalp had been ripped loose by Perry’s teeth.

Perry was out for the rest of his senior season because of his injuries. Meanwhile, Wong was held in limbo for about two weeks by the Redwood administration before being told he was suspended for the duration of MCAL playoffs, removing from the team a strong defender and lowering team morale.

“As a team, when [Wong] was suspended, it put a damper on our season,” team captain Jack Elton said. “We felt we were unrightfully punished for kind of a fluke incident that just happens in any sport where there’s a collision.”

However, Perry said he believes the incident was not a fluke.

“I had already won the ball,” Perry said. “The ball was already out of range, but after the header, I was on my way down, the ball is clearly out of sight, and he comes in very late.”

Numerous sources said that Wong is an aggressive player.

According to Redwood junior Luke Pfeiffer, the yellow card was nothing out of the ordinary for Wong. Pfeiffer said Wong often is called for fouls, to the point that players on the team considered asking coach Brandon Murphy to talk to Wong about the issue.

Elton said Wong is an aggressive player, but he could see no reason that Wong would have looked to hurt Perry.

“He is physical, a bit more physical than me,” Elton said of Wong. “That’s kind of his style of play – he uses his athleticism and his grit to make up for, maybe, his lack of technical skill. He goes in hard, but he’s not a mean person, he doesn’t get in fights, he doesn’t go ‘Oh, I’m going to go fight this person.’”

Pfeiffer said he thought the incident with Perry merited a red card.

Had Wong been given a red card, he would have been ejected from the game and automatically suspended by the league for the next game. But because he only received a yellow card, which is considered a warning in soccer, the suspension was instead made by the school administration.

Principal David Sondheim said by law he could not comment on individual student disciplinary actions, but noted that a full investigation was completed about the incident.

“A ref may or may not decide to eject a player from a game,” Sondheim said. “We still need to look at it as a safety or sportsmanship issue.”

He said that athletic director Jessica Peisch explained to him that when she was at the game and saw the play, she thought it was just a 50-50 header that resulted in a fluke injury. Wong said that Peisch told him the video, when watched frame by frame, made her believe the play warranted a suspension.

Peisch said she could not comment on the issue by law.

Pfeiffer said the administration also spoke to him and junior Sasha Boussina as part of its investigation.