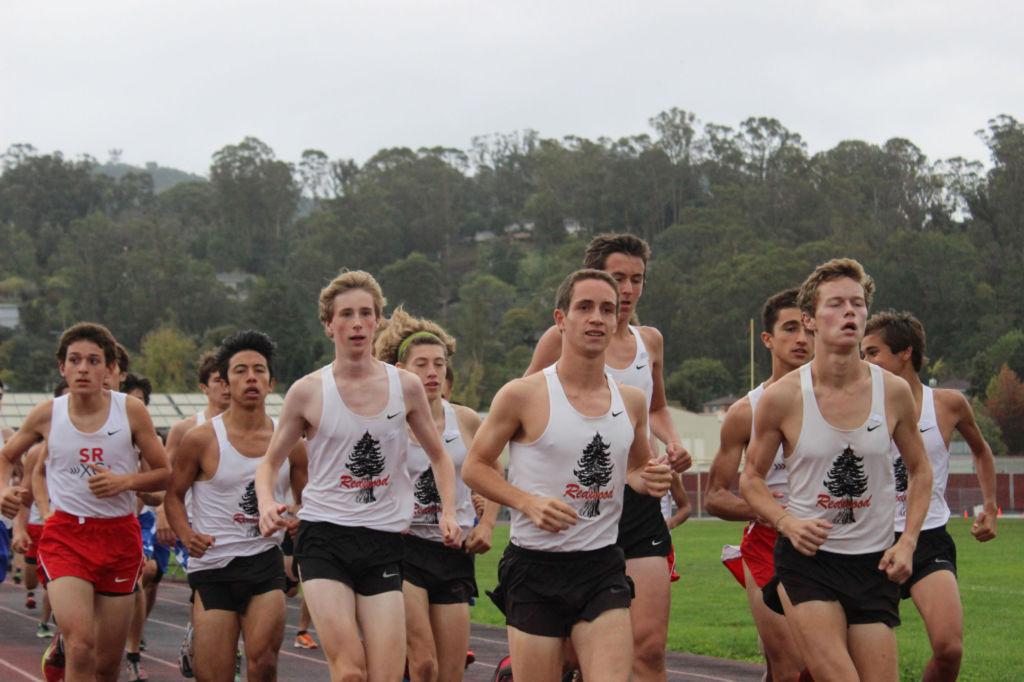 Runners from Redwood, San Rafael, and Terra Linda all sprinted through the last stretch of the race, each one pushing themselves to the limit as they vied for a victory.

Unlike every other race of the season, though, a Redwood runner was not victorious. San Rafael sophomore Munir Kabbara emerged in the lead in the last lap and surged ahead to win the race, finishing the five-kilometer course in 17 minutes and two seconds.

Redwood also claimed the next five places after Martinez and Thomas, leaving the next non-Redwood runner in tenth place.

The San Rafael course was new to some Redwood runners, and the rainy weather added a new level of caution.

“It’s a pretty absurd course if you look at the map. You got all sorts of loops going in random places,” Anderson said.

Caution was especially key on the downhill slope. Towards the end of the course, runners descended a slope before entering the track. This section of the course had exposed tree roots, and was made slippery by the rain.

“The downhill is a little precarious. You want to be a little careful not to hurt yourself,” coach Laura Schmitt said.

Anderson and Thomas usually run together, but the slope separated them.

“I may have overdone it on that downhill, so we separated there,” Anderson said.

Thomas, on the other hand, was more cautious and didn’t take any unnecessary chances running downhill.

“We’re going into our championship season and the downhill was pretty slippery, so I didn’t want to risk it,” Thomas said.

Weather and the notorious downhill slope were not the only problems for some runners. Sophomore Carson Byck started strong, but faced a dilemma in the middle of the race.

“I realized that I had to go to the bathroom, and that affects how you run because it usually gives you lower body cramps, and it really slowed down my time,” Byck said.

Despite the weather and terrain challenges, Martinez improved upon his score from previous meets.

“When someone passes me, I’ve been letting it get in my head [previously] and it messed me up. Lately I’ve been trying to just tell myself that I’ll be fine and keep up with them,” Martinez said.

This was the last race in the league season for Redwood, which has its first MCAL playoff event on Wednesday, Nov. 9.