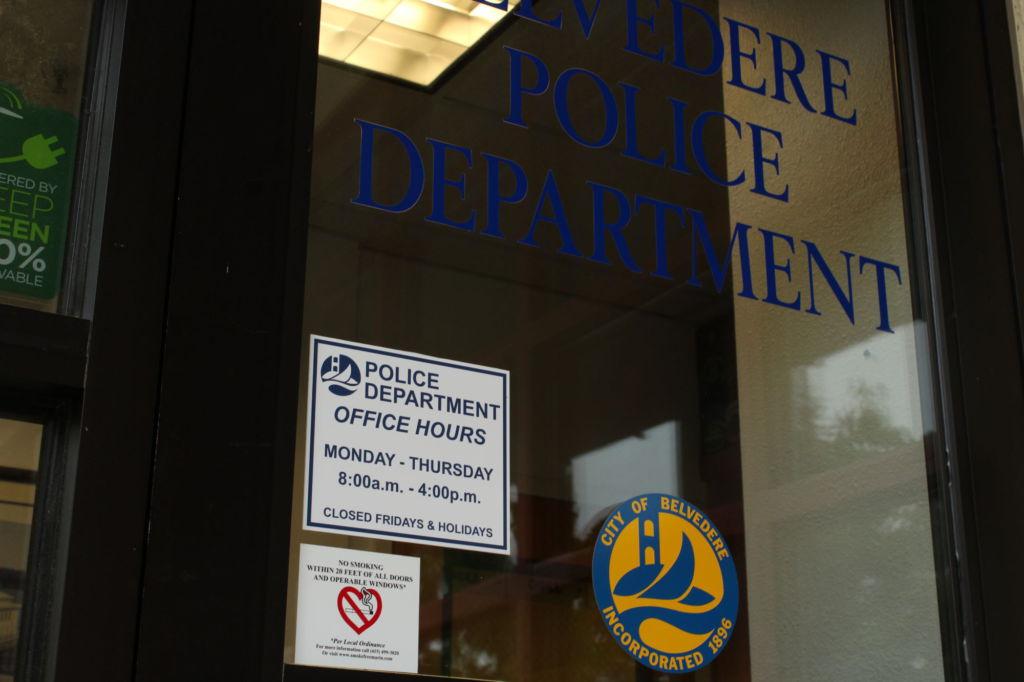 This ‘No smoking within 20 feet of all doors and operable windows’ sign on the front door of the Belvedere Police Department is very similar to those that will be going up near multifamily housing and public parks by October 10, 2017

The city of Belvedere approved a law on Oct. 10 that will prohibit smoking in multi-family housing, except for designated areas, and within 20 feet of any area where smoking is not already allowed. The ban is being implemented due to pressure on the city from the American Lung Association (ALA), according to Belvedere mayor James Campbell.

The new ban updates the smoking policies established in 1993. According to the old regulations, smoking was only prohibited in communal areas, such as restaurants, public or private offices, places of employment and other enclosed facilities.

Every year, the ALA releases a report grading California cities and counties on their tobacco regulation. Cities are awarded grades based on four criterias: smoke-free outdoor air, smoke-free housing, reducing sales of tobacco products and emerging issues, which include tobacco sales in drug stores and the sale of flavored tobacco, according to the ALA. Since 2010, Belvedere has received an “F” grade on this report each year.

Belvedere received the failing grade for not having a formal law from the city prohibiting smoking in multi-family housing, according to Campbell.

However, all 277 units of the multi-family housing in Belvedere are owned by the Allen family, who already prohibit smoking on their properties.

“We didn’t really think we needed to make a law on something that was already taken care of,” Campbell said. “But we kept getting a failing grade from that, so we said ‘What can we do to change that?’ so we passed the law.”

It becomes very challenging for a city to receive a passing grade if one of the criteria set by the ALA is not met, according to Campbell.

“Belvedere doesn’t have any stores so for us to pass a law saying you can’t sell cigarettes in your store in Belvedere is kind of goofy. But the only way to get the A is to pass that law,” Campbell said.

In addition, Belvedere did not have any signs in place to enforce the pre-existing law against smoking in public parks, which compromises their ability to get a passing grade.

“People in Belvedere don’t like signs,” Campbell said. “Nobody smokes in our public park, but if we’re going to get an F because we don’t have a sign that says ‘No Smoking,’ then we’ll put up a sign.”

Campbell also said that Belvedere is a fairly healthy town and that he does not know of any resident of Belvedere who is an avid smoker. Even though this is the case, Belvedere does not want to continue receiving failing grades that tarnish their record. However, Campbell said he believes that the law is important because it limits the damage of secondhand smoke.

Despite the new regulations, Belvedere resident sophomore Sutter Portner said that she does not think this ban will stop smoking within her family.

“My dad usually smokes about two packs a day and has been doing so since he was 13 years old,” Portner said. “He cannot [stop smoking] because he is so addicted and I can’t see him changing his habits because of this ban.”

Portner and her family do not live in multi-family housing, but this law affects her father because of the addition of no smoking signs to public areas and the heavier restriction of public smoking.

Although Portner feels that the ban won’t be very effective, some other residents disagree.

“The ban is very beneficial to Belvedere as a whole,” said Belvedere resident junior Drew Kellerman. “It prevents the effects of secondhand smoke officially here and that’s a really good thing.”

The ordinance will begin to be enforced by the police beginning Nov. 30, and the city plans to install “No Smoking” signs within the next year.