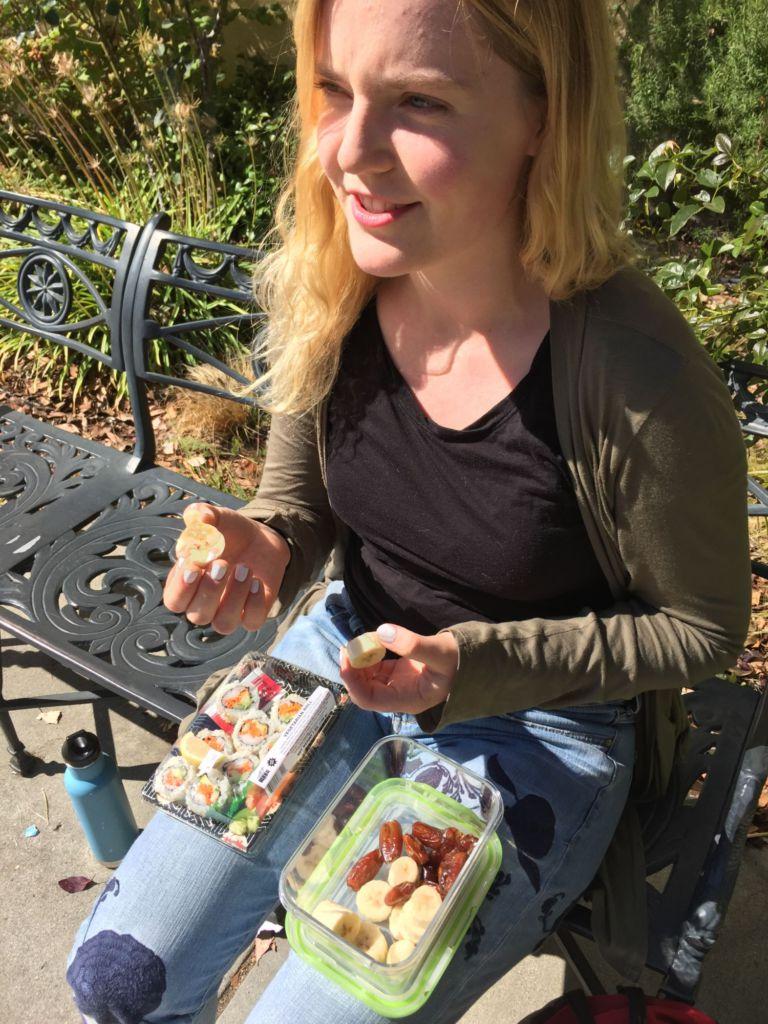 When Patti Breitman, a grandparent of a Redwood student, decided to go vegan in 1986, veganism was an emerging movement that was unheard of by many and understood by even fewer. Nowadays, with the seemingly sudden surge of vegan enthusiasts raising their voice on social media platforms, veganism is a more well-known lifestyle and has led to increased dialogue of many topics concerning the well-being of humans and the planet, according to Breitman.

Whether you are vegan or not, the benefits and risks of leaving all animal products out of the human diet can be interpreted several different ways and remain controversial.

It is widely assumed that most people go vegan for health reasons or to stop engaging in animal cruelty, but there are several other reasons that people make the switch, such as caring for the environment and being more sustainable. Breitman, who has been vegan for 30 years, originally became vegan for the health benefits, but remained vegan because of its zero-cruelty policy toward animals.

“I did not start [eating vegan] for loving animals reasons, and that evolved and over the years it became much more obvious to me that the reason I stay a vegan has to do with the animals, and any health side effects are just coincidental,” Breitman said.

For seniors Cameron Sylla and Courtney Carswell, the decision to become vegan did not depend completely on ending their impact on animal cruelty, but it certainly played a large factor.

“I started doing more research online, watching more YouTube videos or just documentaries about animal agriculture and the process to get milk and meat and all that food,” Sylla said. “The more I learned about it the more I felt kind of like ‘hmm, I don’t really agree with this ideology’ or ‘I don’t really want to contribute to this anymore.’”

Both Sylla and Carswell explained that they feel much better both inside and out as a result of giving up meat, eggs and dairy.

“Physically, I feel a lot lighter, like there’s no big meals that make you feel really heavy and gross,” Sylla said.

“The biggest question I get is ‘Where do you get your protein? That’s not sustainable, you’re going to lose muscle mass,’ but you can get it from lentils and garbanzo beans and fruits and vegetables. I think [veganism has] made me get more into cooking and trying things out, and I’ve always packed a lunch but this had just made me more conscious of what I’m bringing,” Carswell said.

Breitman also mentioned that when people go vegan, it’s inevitable that others will judge them and make them question their own choices, but it’s important to stick up for themselves and be confident in their reasons for following the lifestyle.

“People going vegan should know that everyone’s going to want to know more about it and they’re going to challenge our choices, and it’s important to just say ‘I’m confident that I know what I’m doing,’” Breitman said.

Lauren Foley, a dietitian at Healthy Living, a nutritional counseling service in Marin and San Francisco, explained that the health benefits of veganism have been revealed in several studies that have linked the plant-based lifestyle to a lower risk of chronic disease.

Foley explained that a predominantly plant-based diet can reduce the severity of diseases like diabetes and cardiovascular disease.

Foley placed an emphasis on the distinction between vegan and plant-based diets. While vegans can still indulge in many unhealthy foods, such as french fries and oreos, people who follow a plant-based diet focus on eating mostly from natural, unprocessed foods such as fruits and vegetables.

“It’s sort of like a square is a rectangle but a rectangle’s not a square. Vegan could mean a lot of different things, it just means you’re excluding all animal products,” Foley said. “Plant-based really means that the majority of your intake is coming from natural, plant-based foods as opposed to processed foods.”

Foley also mentioned some of the negative impacts that veganism can have on  one’s health if the diet is not planned out properly.

Nutrient deficiencies are why it’s important to talk to a doctor or a dietician to plan out a sufficient diet if considering this lifestyle, according to Foley. Some people become vegan for the wrong reasons, such as losing or controlling their weight, but this is a red flag that could lead to an unhealthy lifestyle physically and mentally down the road, Foley said.

“Being vegan means, to get your nutrient needs met, you’re going to have to eat a lot more foods, and it’s really critical that you’re including energy dense sources of food—foods high in fat and calories like nuts, oils, seeds, avocado,” Foley said. “Somebody who’s doing this to lose weight, they’re also going to be avoiding these foods, typically.”

Since there are several different viewpoints surrounding veganism, a negative connotation can sometimes be instilled in non-vegan’s minds. People who eat any and all animal products can sometimes feel targeted by vegans for not doing the right thing, when they don’t see any problems with their lifestyle.

“Vegans can be misconstrued because I feel like maybe ten years ago, or however long ago, there were a ton of really annoying vegans that would just shove all their opinions and thoughts, whether they were facts or not, in everyone’s faces,” Sylla said. “There became this stigma of ‘Oh, they’re a vegan, they’re just going to yell at me that I’m a murderer,’ and stuff like that was really big, so I think people have a negative viewpoint a lot of the time unfortunately.”

Junior Emme Silverman, who eats animal products, says that she understands the purpose of veganism but doesn’t feel that it has a big impact on health or the environment.

“I totally respect people who are cautious about what they eat and are aware of the foods that they’re consuming and how it affects our planet, but I personally do not have the drive or motivation to restrict my diet in that way,” Silverman said.

Since Silverman gets vigorous exercise as a rower, she doesn’t feel that a vegan diet would satisfy her protein needs and fuel her with enough energy. She believes that animal products aren’t problematic for humans to eat because they have allowed the human race to thrive by feeding people for centuries.

“I do believe that we’re technically supposed to be eating meat because they do have all those fatty proteins and all the good nutrients that humans should be taking in daily, and that provides the energy to get through our day,” Silverman said. “But do I hate the people who don’t do that? Obviously not, because they made a conscious choice to watch their diet and be more animal and earth friend, which is amazing.”

While Silverman says that she loves animals and isn’t a “horrible human being,” she believes there is a difference between seeing a living animal right in front of you versus seeing it as a processed piece of food that looks delicious to eat.

“I think it’s a betrayal to the child and to the animal to pretend that we’re friends with them and then turn around and slaughter them as food,” Breitman said.

However, some vegans would rather label themselves as plant-based to avoid the judgement that might come along with the word “vegan.” Sarah Bacon, co-owner of the 100 percent plant-based Nourish Cafe in San Francisco, also says that there can sometimes be a negative stigma surrounding the particular word “vegan,” but she feels it is starting to wear off.

“We prefer [to say] plant-based because vegan can be political, and it carries a little more weight when you say the word vegan. People think ‘oh they’re vegan, they’re very judgy,’ so we like to talk about Nourish being plant-based because it’s more about the food not about the lifestyle or the politics of veganism,” Bacon said.

Nourish Cafe, one of the few totally plant-based restaurants in San Francisco, is located in the especially non-vegan Richmond district. The cafe makes dishes using “tuna,” which is made out of ingredients such as nuts, seeds, and kelp flakes, and also outsources “cheese” made out of almonds from a brand called Kite Hill.

“Our tuna is really really unique; I think a lot of people come in and are surprised that they like it so much and can’t really wrap their heads around that it’s not tuna,” Bacon said.

According to Breitman, veganism can be beneficial for the environment as well as for health. Another reason she went vegan was because of the negative impacts animal farming has on the environment.

“From a planetary and environmental standpoint, it would be good if everybody could move toward a vegan diet. Even if they don’t go 100 percent but if they go a few days a week, and a few meals a day without animals products we could stop this destroying the planet,” Breitman said.

One well-known and influential documentary that chronicles the harshly negative effects of animal agriculture on the environment is called Cowspiracy, and it includes many of the points mentioned by Breitman.

For example, Cowspiracy alludes to facts such as the amount of greenhouse gas emissions cows are responsible for (18%, according to the Food and Agriculture Organization of the United Nations), as well as other inefficiencies of animal agriculture.

She also explained that oceans are becoming “deserts underwater” because of mass net fishing, and species in the ocean are becoming endangered because humans are eating so much fish.

An article from National Geographic called “Marine Habitat Destruction” goes slightly further into detail about how fishing takes a toll on oceanic habitats.