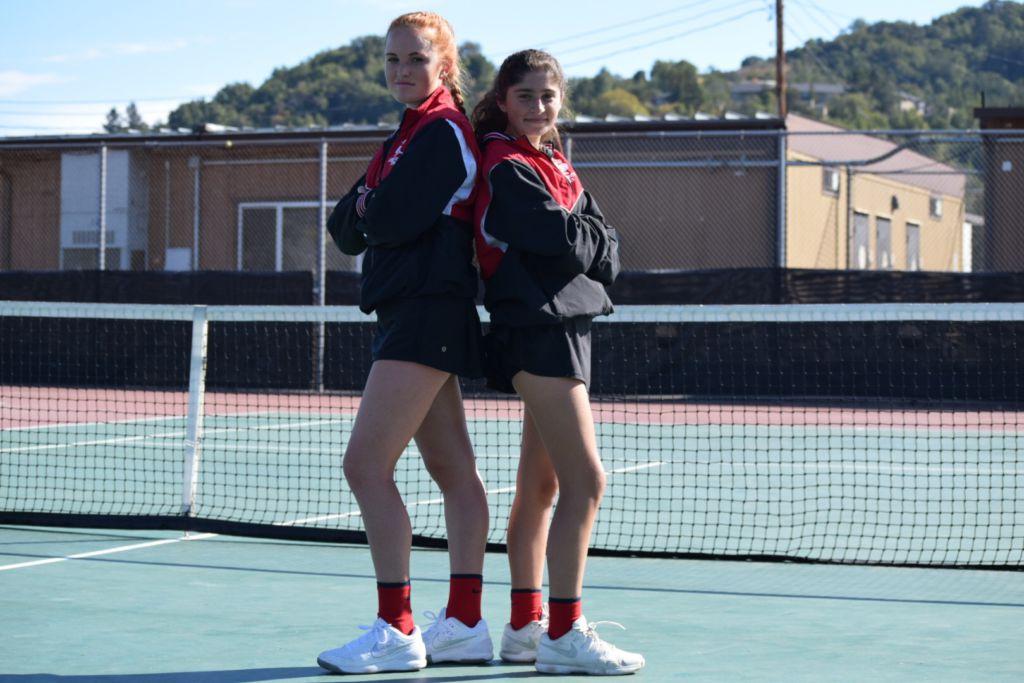 As they simultaneously hit right-handed volleys back to another doubles pair at practice, Molly Kehoe and Zoe Babikian looked like they had been playing together for years.

It is their coded communications and obvious chemistry, shown by the constant smiles and laughter exuding from the girls when they are together, that make them oneof the varsity girls’ tennis team’s top duos.

According to coach Marlies Zeisler, the girls were placed together due to their instant relationship on the court, even though they were not similarly ranked on the team’s ladder system.

Zeisler said that tennis requires a lot of communication between athletes playing doubles, and success can hinge on the chemistry between the two players.

“A lot of tennis is about having fun and enjoying yourself, it’s that kind of a sport. So when there’s no chemistry, it makes it harder because you really do need to talk a lot,” Zeisler said.

Both girls agree that their friendliness and positivity towards each other has been beneficial in how well they play together.

“Some people get really intense and we both sort of are able to keep it in perspective and keep it light and have fun with it,” Kehoe said. “We definitely want to win, but we’re also able to be there for each other and rile each other up versus shutting down if something starts to go wrong.”

One of Babikian and Kehoe’s attributes is a unique “code” they use for serving placements to throw off their opponents.

“We have a category of words for each placement of serves so that the opponents can’t catch on, so [for example] if we say a different type of fruit it means one particular placement,” Kehoe said.

According to Kehoe, the code makes it more fun for the pair.

“Sometimes we’ll say guava but then halfway through the match it’ll become cantaloupe or grape or something to change it up and to confuse [our opponents] but also keep it fun for us.”

They also have differences in playing styles that complement each other on the court.

“[Babikian]’s a great baseliner. She really moves the ball across the court, which then sets up her partner [Kehoe], who loves the net, to get up there and really volley shots off the net and take care of stuff up at the front,” Zeisler said.

The two are very compatible doubles partners as their personalities and skills work off of each other.

Kehoe and Babikian agree that their similarities and differences in playing style work strategically together to help them win.

Babikian agreed, adding that they both can play on either side of the court, so if one of the girls is having an off day on one side, they can switch.

When the girls go from practice to a match, their intensity shifts from being fun to focused, while still not being too serious.

“The team in practice is less focused. We just have fun and try to bond as a group instead of focusing on technical skills per se,” Kehoe said. “But then in matches we definitely get in our zone and put our code into action and make our plans a little more strategic.”

Babikian added that playing together during practice helps the girls to plan out things in advance, so that for the match their intensity becomes stronger and more focused.

Another interesting aspect of the duo is that Kehoe is a junior, while Babikian is only a freshman.

As Kehoe has two years more of experience over Babikian, she sees herself as somewhat of a leader for the younger of the duo.

“Because this is my third year playing in MCALs, I understand which different matches are worth stressing about and in what situations it’s important to be concerned and how to keep the match in perspective,” Kehoe said.

According to Kehoe, she is trying to help Babikian as much as she can because, as an upperclassmen, she has more experience than Babikian.

Babikian feels lucky to be playing with an experienced upperclassman, and playing with Kehoe has also encouraged her to step up her game.

“I always want to play well and I’m lucky to play with an upperclassman and have a friend, so I do want to work harder,” Babikian said.