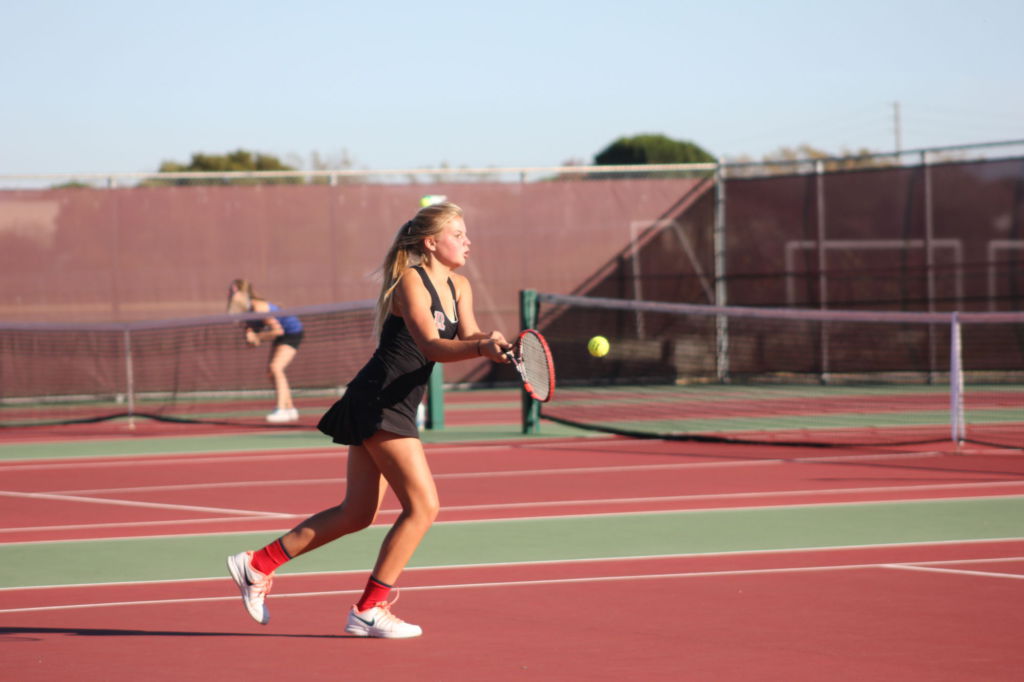 The girls’ varsity tennis team beat Terra Linda on Oct. 20 with a match score of 7-2 on Senior Night, which was their final contest before playoffs next week.

Redwood’s singles players put up a strong performance, beating their opponents in all six matches, while the doubles

teams had one win but suffered two losses.

According to senior Chloe Willson, who won her match in two sets with scores of 6-0 and 6-2, Redwood had a better outing this time compared to the last time they played Terra Linda.

“This game was further in the season so I had more practice, and since I had already played [my opponent] before, I was able to better strategize my point. But I think we were all just more mentally prepared,” Willson said.

Willson also said the weather posed a bit of a challenge.

“It’s usually really windy which was not the case today. Today, it was really hot and our courts radiate heat which made it more difficult,” Willson said.

Senior Sophia Gazor, who won her match with set scores of 6-1 and 6-0, said her greatest challenge was making sure she didn’t over hit the ball when playing against a lower ranking opponent.

“It is a challenge because you have to focus on making sure you don’t over hit or do something drastic that would work in a higher level match. For example, if you are playing against someone who doesn’t play at the same pace as you, then you can easily hit the ball 10 feet out,” Gazor said.

Terra Linda singles player Cindy Escobar, who lost her match against Gazor, said playing Redwood has been a good experience.

“Although we have lost against Redwood both times, Redwood is a fun school to play against. I think that this season, we have had an opportunity to get better as well,” Escobar said. “Even though we haven’t won I can feel our team spirit really coming together.”

Before the game started, Redwood celebrated the senior girls for whom this was the last game of the regular season. The girls lined up and were presented flowers and small gifts by the coaches.

“We do that every year for the seniors, and it was pretty nice watching that for three years and now finally being a

part of it my final year,” Willson said.

The team’s chemistry has played a big role in the outcome of the season, according to Gazor.

“This year we have a really close knit team and everyone really loves each other. I think because of this we’re seeing a lot more team spirit and having a lot more fun with the matches, which are all making us play better,” Gazor said.

According to assistant coach Bjorn Sandberg, the girls have progressed as players this season.

“Just by playing everyday, they become so much more consistent and they build their confidence which brings them up to the next level,” Sandberg said.

Redwood has only lost once this season, to Branson earlier this month, which ended the Giants’ undefeated streak.