Point, Counter-Point: Kneeling for the anthem 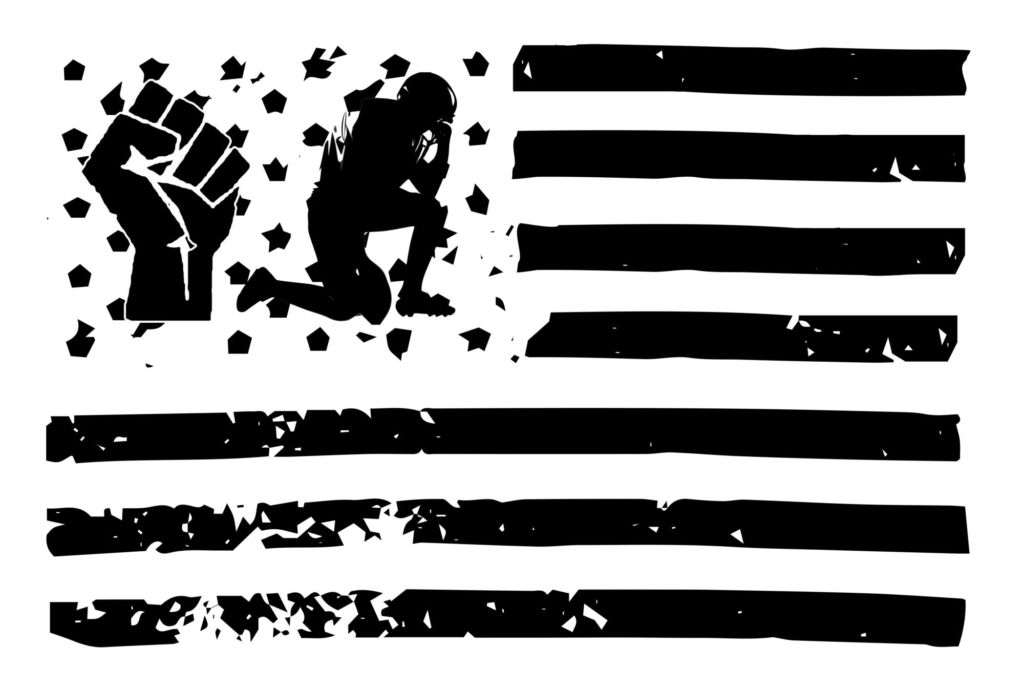 Point, Counter-Point: Kneeling for the anthem

It’s the anthem sensation that’s sweeping the nation. Colin Kaepernick’s decision to sit, kneel or do anything but stand in honor during the national anthem has inspired thousands of professional and young athletes to do the same, while others argue that the unpatriotic protest is unproductive and disrespectful.
Thus far, neither the NFL nor any individual organization has made an attempt to silence the protests, but this hasn’t stopped the argument from raging over whether the actions are appropriate.

No one should be able to stop Kaepernick from doing what he wants during the singing of the national anthem. One of the greatest rights we have as Americans is free speech and our ability to speak out when we face injustices. Anyone who believes that Kaepernick’s stand (or lack thereof) is unpatriotic needs to realize that it is quite the opposite.

The idea to use professional sports as a platform for the discussion of social issues does not originate with Colin Kaepernick. The first major instance came in the 1968 Olympics when Tommie Smith and John Carlos joined in a salute to the Black Power movement during the gold medal ceremony for the 200-meter race. Occurrences have been as recent as Lebron James, Chris Paul, Dwyane Wade, and Carmelo Anthony speaking before the ESPY awards about the oppression of Black people in American society.

Kaepernick’s protest is just the latest in a string of protests. I don’t believe that Kaepernick should kneel or that he should be forced to stand, but that he should do whatever he wants. It is not his actions that worry me, but the actions of those who potentially could control his ability to protest.

Those who boo Kaepernick when he is on the field or want him to end his protest often view it as an act of disrespect to those who protect our country. However, in the midst of the media storm about whether or not Kaepernick’s decision was patriotic or disrespectful, groups of veterans emerged and offered their support for Kaepernick.

Much of the outpouring of support for Kaepernick’s actions has come via social media along with the hashtag “#VeteransforKaepernick.” As veteran Charles Clymer wrote, “Don’t use my service―or that of any veteran―to justify the silencing of Black Americans. Not on my watch,” or as another veteran Sunny Anderson said, “I took an oath and served so players on a team I don’t even like could have freedom of speech.”

There is no need for us to put words in the mouths of the people who fight for our country when they have already offered their opinion and backed Kaepernick’s decision. These people fight for Kaepernick’s right to speak out if he believes there is injustice in the country.

Kaepernick has said that his protest is not meant to disrespect police or the military, and instead is intended to bring attention to the issues that he sees across the nation.

As fans, or simply as citizens, we shift between criticizing professional athletes for not using their position in society for a greater purpose and then chastising them when they try to make a statement. Kaepernick has one of the greatest pedestals to speak about social issues, so we can’t expect change as a society if we don’t allow people like him to speak out.

For me, it doesn’t matter whether Colin Kaepernick makes the decision to kneel or stand during the national anthem. What is most important is that he isn’t stopped. If NFL or individual team executives try to stop Kaepernick from making himself heard, then they are the ones who are truly disrespecting the flag.

Kaepernick has every right to protest, but the way he is doing it is unproductive and disrespectful
By Eric Ahern

When a determined young woman bravely enlists in the United States military, she is not risking her life to fight for a piece of meaningless, colored fabric.

When a police officer takes on the graveyard shift, choosing to spend a night alone on patrol in a dangerous neighborhood, he is not taking on this responsibility to defend a catchy tune.

When a passionate citizen goes to a polling booth on Nov. 8, he is not putting in the thought and taking the time in order to ensure the future of a striped sheet with stars stitched into the corner.

That soldier is fighting, that officer is protecting and that citizen is voting, not for a song or for a meaningless communion of thread, but for the flag, Old Glory and for the anthem, the Star Spangled Banner.

The flag and the national anthem are patriotic symbols that represent America’s past, present and future. We honor them to show our respect for this nation’s values, virtues and even its shortcomings. The First Amendment, the initial component of the Bill of Rights upon which our country was founded, allows us to express any dissatisfaction we may have for issues stifling American citizens, but that does not mean we must disrespect the flag, the anthem or the nation while doing so.

Keeping this in mind, does Colin Kaepernick have the right to break the honorable tradition of taking a moment to pay respects to his country, and does he have legitimate reason to be protesting in the first place? Yes and yes. However, is disrespecting the flag and anthem the appropriate way to go about it? Definitely not.

As a professional athlete, Kaepernick should absolutely utilize his public platform to fight for issues about which he is passionate. In fact, no Americans, especially celebrities, should refrain from attempting to make an actual difference in this country, but they should try to do so in a productive manner.

For instance, in response to the same social injustices that Kaepernick is protesting, Green Bay Packers player Ha Ha Clinton-Dix is going back to school to get a criminal justice degree. Instead of kneeling, Clinton-Dix is standing up and taking action by educating himself, and eventually others, on the social issues at hand.

According to Clinton-Dix, he is studying in hopes of obtaining a degree in order to “learn more about the law, about what’s going on in this world, and to be a mentor to kids from where [he is] from.” Clinton-Dix wants to “[help them] understand that the law isn’t against you, it’s actually for you.”

Clinton-Dix took matters into his own hands in order to combat social inequalities, but Kaepernick’s actions have only raised tensions.

On Aug. 26, during a televised press conference, the 49ers quarterback wore a shirt featuring communist dictator Fidel Castro, the shirt referring to Castro as a “like mind.” So while Kaepernick claims he is fighting against oppression in America, he simultaneously chooses to endorse the former totalitarian leader of communist Cuba, a man who oppressed millions and who has one of the worst human rights records of all time.

This wasn’t the only time that Kaepernick has contradicted the message he claims he wants to express. In September, images of Kaepernick’s attire from training camp surfaced on the internet. The photographs showed that Kaepernick had been wearing socks that feature multiple pigs wearing police caps. This behavior only increases animosity between police departments and communities, instead of resolving any issues.

It’s no secret that America is currently plagued with a variety of social, political and economic troubles. Kaepernick is completely justified in his desire to mend these wounds, but the actions he has taken are not the correct way to sew the stitches. We must stand unified to make a positive difference, without issuing disrespect to anything that deserves just the opposite.