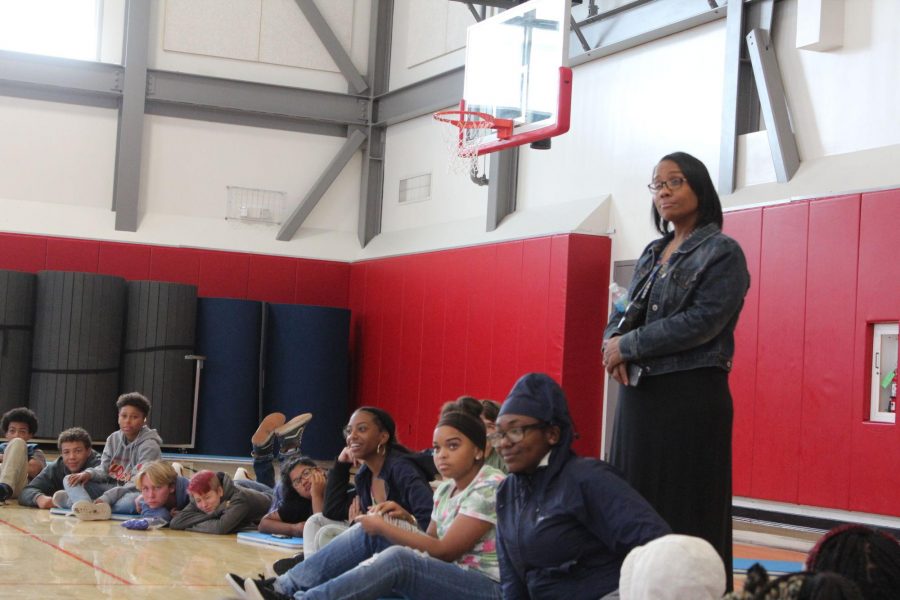 On Sept. 26, roughly 300 students crowded into the small gym during Advisory, expressions of confusion and concern upon their faces. On Sept. 27, seven staff members and three students spared an hour after school to focus on Redwood’s future plans involving racism. Two days later, on Sept. 29, 36 attentive students came together in the small gym, choosing the discussion over typical SMART period work time to speak openly about their feelings toward stereotypes and race. Though the numbers of students at each meeting differed, and the topics varied slightly each day, there was a similar purpose emerging at each of these meetings: addressing racism at Redwood.

After a racial slur targeting Redwood assistant principal LaSandra White was spray-painted on the spirit ball, the administration and the student body united to take action against racism at Redwood. Junior David Simpson-Heil and senior Carl Simpson-Heil contacted White to see how they could help. They talked to Principal David Sondheim and planned the voluntary discussions to improve the understanding of racial identity and racism at Redwood.

Leadership students also delivered flowers to White the morning after the vandalism was publicized to show support from the student body.

As the bell rang for Advisory on Sept. 26, students gathered in front of the small gym. Although attendance wasn’t mandatory, Monday’s discussion had the highest attendance of the three forums. 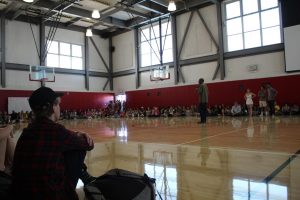 At the discussion, students sat tightly packed around the walls of the small gym. In the middle stood Carl Simpson-Heil and. David Simpson-Heil.  Keith Jackson, founder of Dynamic Solutions for Youth, and who works with different schools with the TUHSD district to discuss racism, also came to Redwood to help initiate the forums.

“We are here to talk about the word n****r,” Jackson said, beginning his lecture.

Jackson and the other two speakers emphasized that the discussion would be honest. The speakers talked briefly about the history of the N-word as well as how it impacts Redwood’s community now, and focused on the importance of the school coming together to change its culture.

“I don’t care if somebody came from another school and wrote it on the ball—there is racism at this school,” Jackson said. “How do we change the culture at Redwood High School? How do we make the other students aware of what it feels like to be a Black student at this school and hear racial epithets?”

The silent audience continued to listen as the speakers took turns sharing their own experiences involving the N-word. David spoke about what it is like to be a Black student at Redwood.

“Normally if someone on the street says, ‘F*** you,’ you’ll be shocked and might be a little offended, but it won’t really affect your identity. But when that insult is associated with something you can’t change about yourself, it makes it seem like there is something fundamentally wrong with you,” David said.

At the end of the 35-minute discussion, Jackson urged the crowd to open up to one another and understand different perspectives.

Jackson said that the overall goal of his lecture was to inspire students to reach out of their comfort zones and embrace others.

Multiple students, including freshman Sergio Alamo and senior Sam Sanchez, said that they were amazed by the amount of peers who attended the discussion.

Sanchez said she attended the discussion because she thought that the vandalism was disrespectful and she wanted to hear about what actions would be taken.

After school on Sept. 27, a group of three students and seven staff members, including White and Sondheim, met in Room 182 to consider how Redwood will approach race in the upcoming months. The primary goal addressed was how to continue raising awareness so that racism can be eliminated from Redwood.

Sondheim said that the race issue won’t be solved right away, which he said was okay because it meant that there would have to be a culture change regarding the way Redwood handles racism.

The group discussed how they would shape the following dialogue at SMART, and planned to incorporate more student discussion instead of lectures.  The teachers and students at the meeting hope to make Redwood a safe environment for all students of color.

“Right now we are at a place where our numbers [of students from Marin City] are smaller for a variety of reasons, but if we can build up this sense of community so they feel more comfortable being here, I think that will help that issue.  So this is the right time and work to be doing,” White said.

Later in the meeting, differences between schools within Marin County were considered. According to Sondheim and others at the meeting, schools like San Rafael have more racial diversity than Redwood, but there are forms of racial discrimination everywhere.

Attendees of the meeting planned to use Advisory as a main platform to address racial problems as the school year progresses. Sondheim has a list of other resources to use, such as specific organizations, from emails that concerned staff, parents and students sent to him. The main issue the attendees addressed was how to continue pressing this issue at Redwood as time passes on.

At the last student-run forum to discuss racial identity, about 33 students met by the small gym at SMART. The discussion had a more talkative and loud atmosphere than the previous two meetings. 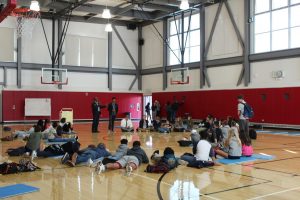 “It was really nice to be able to get more input from the people who came.  And I think the fact that it was more of a conversation instead of us talking at them was really nice,” David Simpson-Heil said.

Forming a small circle in the center of the room, Jackson asked why it’s okay for Black people to say the N-word, but not for White people.

“Whatever question you ask in here, nobody’s going to be pointing fingers and saying you’re a racist, you’re this and that. What this is, is coming together with a group of people that say ‘I want to learn something, I want to know something, I want to hear some clarity, I’m interested in helping out to change a culture of what’s going on,’” Jackson said.

David hopes that future meetings will eventually have even more student interaction, so that students can talk about their ideas and their own experiences and thoughts.

According to freshman Lili Ostoijc-Gibson, this meeting was better than the first due to the increased time for discussion.

“The first one was more, people were curious, and I think these people really wanted to come and had a strong purpose and it was more intimate, so you get to actually listen to people and hear what they have to say,” Gibson said.

Despite having more of a conversation at the meeting, students still worried about whether these dialogs would actually affect the future of the school.

“One of the students asked, ‘What’s going to change from this?’ and that’s the real question,” Jackson said. “Now the real work comes into how we are going to make a real difference.”

Several students interested in continuing the effort to fight racism at Redwood joined a student “steering committee” that met Oct.11 in room 112. According to Sondheim, the school wants to offer more discussions on racism, and the students of the committee will be able to direct the discussions.