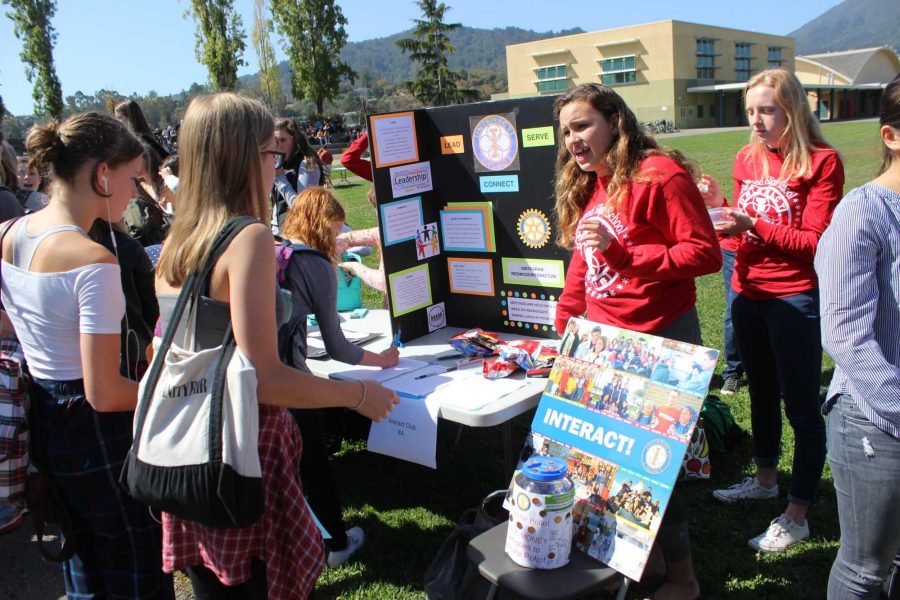 Junior Leah Gustafson explains to students what the Redwood Interact Club does.

Redwood’s biannual Club Day took place during lunch last Wednesday and Thursday on the South Lawn. The event was organized by Leadership.

Since the start of the school year, 51 new and returning clubs have been approved by Leadership. The Breakfast Club, the How To Grow Up Club and the Mind Body Soul Club are a few of the new clubs at Redwood this year.

The Breakfast Club meets Fridays at lunch to watch movies and eat breakfast foods. The How To Grow Up Club meets every other Wednesday and teaches their peers real life skills, like how to do taxes.

Junior Leah Gustafson, the president of the returning Redwood Interact Club, which partakes in one community service project per month, said that the club had a successful club day.

“[Club Day] went really well this year. In past years the weather has been worse but this year it was really nice. I also feel like [Club Day] was very organized,” Gustafson said.

Club Day was equally as successful for the popular Thrift 4 Hope Club, which collects donated clothing and holds a thrift sale in the CEA each semester. They donate the proceeds from the sales to charities; the money from their most recent sale was donated to the Center for Domestic Peace. According to senior member Danielle Kisseberth, the club also obtained 40-50 more signups than in past years.

“The amount of people signing up that we got was outstanding,” Kisseberth said.