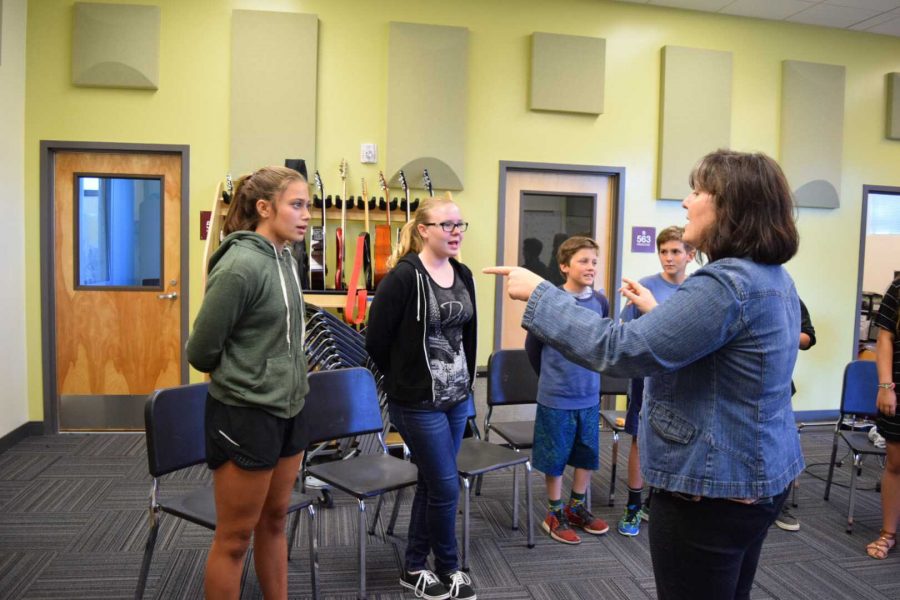 Leading chorus students in vocal exercises and song covers with multiple harmonies at the second chorus class, Martone teaches a program that is open to students of all grade levels and meets on Thursday nights.

A semi-circle of students begins singing, matching tempo and pitch to multiple arrangements of pop music and traditional songs as a part of the new Tamalpais Union High School District chorus program.

The chorus class is held at Redwood on Thursday nights in the small music room from 6:30 to 8:30, and is open to singers of all grades and levels.

Susie Martone, the teacher of the new class, said that she thought it was strange that a school as large as Redwood didn’t have a chorus program, especially since so many of Redwood’s feeder middle schools have large chorus programs.

“Where I used to teach, the high schools all had four or five chorus classes and they all had a full-time teacher. In a school [as big as Redwood] there really should be two or three chorus classes, at least,” Martone said.

“Singing is really good for you – it releases endorphins, so it actually makes you feel better,” Martone said. “When you sing with a group of people over the course of a rehearsal, and when you’re singing something that’s at the same tempo, because you’re breathing together your heart rate actually syncs up with the people you’re singing with.”

Redwood sophomore Skylar Vos sang in the chorus at her middle school and said she was surprised that there wasn’t a chorus at Redwood when she entered her freshman year. Now as a participant in the program, she said she hopes that more students will join throughout the year and that chorus will become an official class during the school day.

“It really builds a community and it’s something that’s different than just playing an instrument. It’s a lot more work, I think, because it is something that you have to just know how to do,” Vos said. “You can’t really tune your voice so it’s a lot on you, and you feel really powerful if you do it well.”

Sophomore chorus member Betsy Tietze said that people who are skeptical about joining the class should give it a try before passing up on the opportunity.

“They should try it out at least, because if you’re feeling like you might be judged or you’re not good enough, you probably are good enough – you don’t necessarily need to be a certain level to join it, and you’ll improve either way,” Tietze said.

Martone encourages students to try chorus, since high school is a time for discovering interests and skills.

“What’s cool about being in high school is you get to try a bunch of different things. You try doing the sports team, you try doing an art class, you try all these different things,” Martone said.  “You’re trying to see what is your thing, but for a lot of people, singing is their thing,”

The chorus class will learn several types of music, from current pop music to traditional choir songs to multicultural music, according to Martone.

Martone also hopes that chorus will be a class for credit at Redwood next year.

“This year is basically an audition for the program, for it to be just on the evenings and seeing if people are interested and seeing if we can get some momentum and interest going,” Martone said. “But the real goal is for it to be a real class, just like band or drama or any art class.”

While Vos agrees that chorus should be an official class at Redwood, she said evening rehearsals allow more time to practice and develop the pieces.

“I think that after school it’s nice because you can have a long extended period and you don’t really have to go in the 50-minute period,” Vos said.

The chorus class will hold concerts that will be open to the entire school.

“We’ll have a concert in December, and we’ll have another concert in either May or June towards the end of the year, and that’s kind of where we’re starting at,” Martone said.

Students from each of TUHSD’s five schools can participate, and signups are open until the end of September.