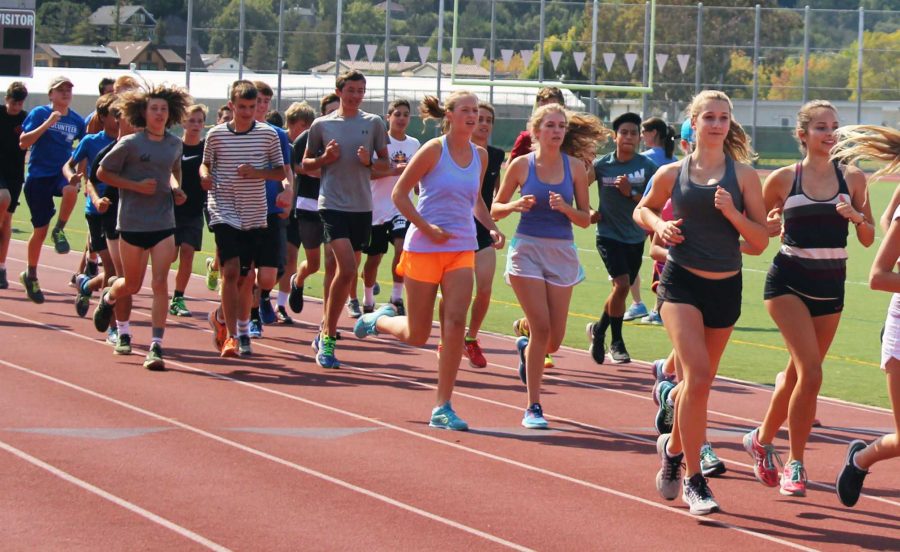 Runners finish their dynamic warmup at practice on Monday, August 22.

The runners congregate around coach Laura Schmitt, their running shoes bright and clashing like a flock of tropical birds, waiting for her to assign their workout for the day. After being given the exact le

ngth of time they will run, down to the second for some, the runners stream through the track’s gate and out through the Redwood parking lot, the faster runners already beginning to pull ahead as the team streaks down Doherty Drive.

“We are probably going to be the best team we’ve had at Redwood so far,” said senior Andrew Thomas, who, along with sophomore Liam Anderson, is the captain of the boys’ varsity team.

Glennis Murphy, one of the captains for the girls’ team, is equally sure of her squad’s abilities.

“I don’t want to sound cocky because every season is a new season, but the girls really don’t have any competition,” Murphy said.

This year Redwood has shifted from Division II to Division III due to a criteria change regarding student body size. The shift could give Redwood an edge in NCS as well as at state because Redwood will now be competing against smaller and like-sized schools, not bigger schools.

However, Murphy believes that the girls’ closest competition in MCALs will be Branson and Tam.

“A lot of times [Branson and Tam] have one or two [skilled] runners, but Redwood has historically had a lot of depth on the team,” Murphy said.

The Drake runners will be a serious opposition for the boys’ team, according to Thomas. Last year, Drake took first in MCALs by a narrow margin while Redwood placed second.

Despite their second place finish, last year’s boys’ cross country team set a county record at the state meet for the fastest ever combined time for a boys’ team from Marin.

The boys’ team this year will be even more successful than last year’s, although there are no standouts among the newcomers, Thomas said. Instead, Thomas believes the sophomores will be a larger presence on the varsity team.

On the girls’ side, Murphy said she believes that freshman Lauren Steele, senior Italian exchange student Chiara Visintini and junior transfer student Olivia Hering will be great additions to the team.

Schmitt will once again be the coach of both cross country teams. Schmitt’s coaching style varies from a casual, maternal approach to a more driven and task focused method, according to Murphy.

Murphy stressed the impact of Schmitt’s wealth of knowledge, willingness to help any runner no matter what his or her skill level and her ability to help an athlete develop without getting injured.

“She makes it a priority to get to know every athlete, and if you put in the time and the effort with her and effort with the team, she’ll put effort into you,” Murphy said. “It doesn’t matter how good you are. She will help you if you want to be helped.”

According to Murphy, Schmitt is careful not to overwork athletes but is still very demanding.

“There is never a moment when you think you should be doing something else,” senior varsity runner James Conant said.

Although the cross country team’s first official meet isn’t until Sept. 15, when the Giants will face Novato and Marin Catholic at Novato, both the boys and girls have been training since the beginning of summer.

“If you were to start when school starts, then that would give you only two or three weeks to get into maximum shape,” Conant said.