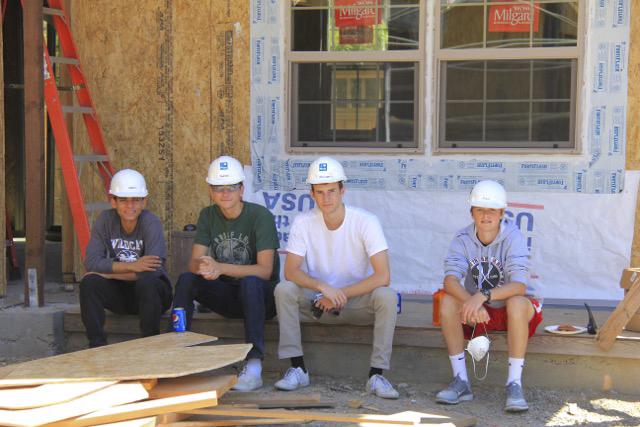 Teen Service Corps members take a break while volunteering at the Habitat for Humanity worksite in Novato.

On any given night when many teenagers might prefer to be hanging out with friends or watching a movie at home, a group of Redwood students may very well be found eating dinner with the homeless or planning ways to best help their community. They are part of the Teen Service Corps, a group that participates in local community service projects.

“We all went to St. Hilary Church, but you don’t have to be Catholic or anything [to join the group],” Shepard said. “They encouraged us to continue in our community service, and so we decided to create our own [group].”

In the past, the group volunteered at Habitat for Humanity, provided food for the homeless, played sports with the mentally disabled and more. Though the group has worked with many nonprofits, they tend to do one-time events in the Bay Area rather than take on a long-term collaboration with a single organization.

Currently, the Teen Service Corps is organizing a car wash to raise money for the group.

“We’ll redistribute [the money] to organizations and projects, for example to get groceries and make sandwiches for people,” Shepard said.

Though the group began with a lot of help and guidance from the founders’ parents, it is now entirely student-run, which allows the students freedom to take the project in whichever direction they want.

The Teen Service Corps mailing list, which initially started with only six people, has grown to over 250. The group’s members range from middle school to high school age, and attend different schools in the Bay Area.

According to Walravens and Shepard, the group has no problem recruiting people to help out at events. When Shepard sent out an email regarding bringing cupcakes to St. Vincent de Paul, an organization based in San Rafael that provides free food to those in need, he received many rapid responses.

“My goal was to bring about 10 dozen cupcakes, and so I needed 10 people and they would each contribute a dozen cupcakes,” Shepard said. “Within 25 to 30 minutes of sending out the email, I’d already had to cut it off.”

According to Walravens, one of the first projects organized by the Teen Service Corps was a trip to the Tenderloin, one of San Francisco’s neediest neighborhoods. The group members joined some of the local community in an “Open Cathedral” worship that took place in an alley outside.

After participating in the mass and singing with all the churchgoers, the volunteers served free lunch.

“Before, we met up in Marin and made 75 to 80 sandwiches and lunches. After the mass was over we set up a table outside, and everyone from the mass could have a free lunch from us,” Shepard said. “The line was stretching all over and everybody wanted their lunch, and it just felt cool to be giving them all that.”

They have also worked with the Rotating Emergency Shelter Team, or  R.E.S.T., which provides shelter and meals.

“At the R.E.S.T. dinners is when you hear the most experiences, because you sit down and eat with the homeless people,” Shepard said. “You hear all different types of stories and how they got to where they are.”

A majority of Teen Service Corps’ founders will be graduating from Redwood this coming year, so they are working on finding new kids to direct the group.

“We’re trying to pass on the leadership to younger kids, and we already have some of that lined up with people that we’re mentoring to be the next leaders,” Shepard said.