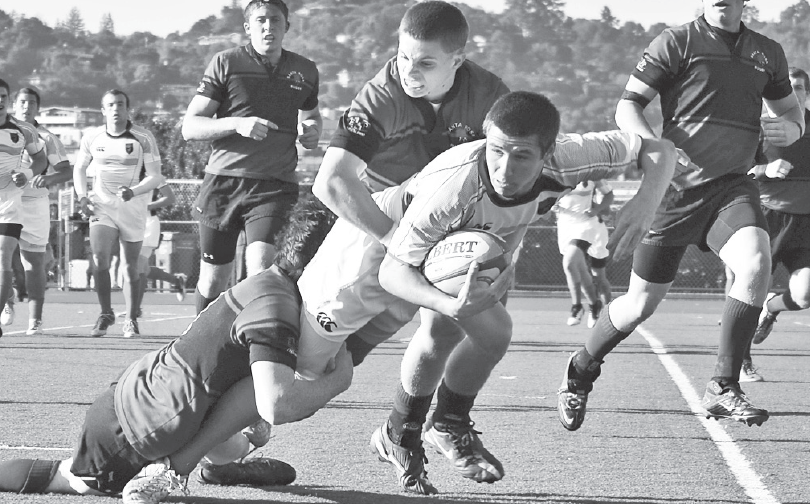 Senior Mikey Dupar runs through a tackle by two Santa Rosa opponents during the league championship game on April 18. The Highlanders won the match by a final score of 12-7.

The Marin Highlanders Rugby Club won’t be vying for the state title this year, but that’s only because the team is focusing on something bigger. For the first time, the club team was invited to the upcoming USA Rugby National Tournament.

The team won the Redwood Empire League title for the fourth year in a row on April 18 and won the Northern California playoff quarterfinal last weekend.

The team will compete for the Northern California championship this weekend, but regardless of the outcome, will not play in the state tournament because it is being held at the same time as a separate nationwide tournament.

The team was invited by a selection committee to play in the USA Rugby National Tournament, which will be held in Utah on May 17-19.

Although the club is entering the tournament ranked last out of eight teams, junior Andrew Dennett said he thinks they still have a shot at winning.

“It will be tough, but ultimately we just want to win the whole thing,” he said. “I guess we’re underdogs going in, but I don’t think it’s unrealistic.”

Cingolani said that he thinks the team will be able to make a dent on the national level if players successfully execute plans for both attack and defense.

“When we play our pattern, we’re extremely successful,” he said. “I think we’re going to make a strong run. We’ll put the Highlanders name on the map.”

Team captain Grant Collins, senior, cited Dennett, Schuyler Whiting, and Louie LeMerle as several of the team’s key players. He said that the team has a strong chance to win the Northern California Championship, and is focusing on preparing for the more competitive national tournament.

“We’re starting to increase our fitness to prepare for the altitude in Utah,” he said. “We’re going in as the eighth seed, but we’ll probably do a lot of damage.”